Contemporary Locus opens a new exhibition project inside the Carmine, one of the oldest and most secret monasteries in the city of Bergamo, founded in the XVth century and then abandoned at the beginnings of the XXth century. For the first time, the monastery is a hub for art, theatre and music events, under the management of the Teatro Tascabile di Bergamo (TTB). In the last few years contemporary locus has opened to the public several hidden and forgotten sites in the city of Bergamo, a task accomplished when contemporary artists accepted to work in, with and for these sites.
contemporary locus 8, curated by Paola Tognon, invites three international artists – Evgeny Antufiev (1986), Etienne Chambaud (1980), and Berlinde De Bruyckere (1964) – along with the Atelier dell’Errore, a so-called ‘social sculpture’, a relational art project at the service of child neuro-psychiatry, devoted for the last thirteen years to the drawing of animals.

The site, its history, and the concurring theme of Expo 2015 have led the 8th edition of contemporary locus to focus on the relationship between humans and animals, from the perspective of art. 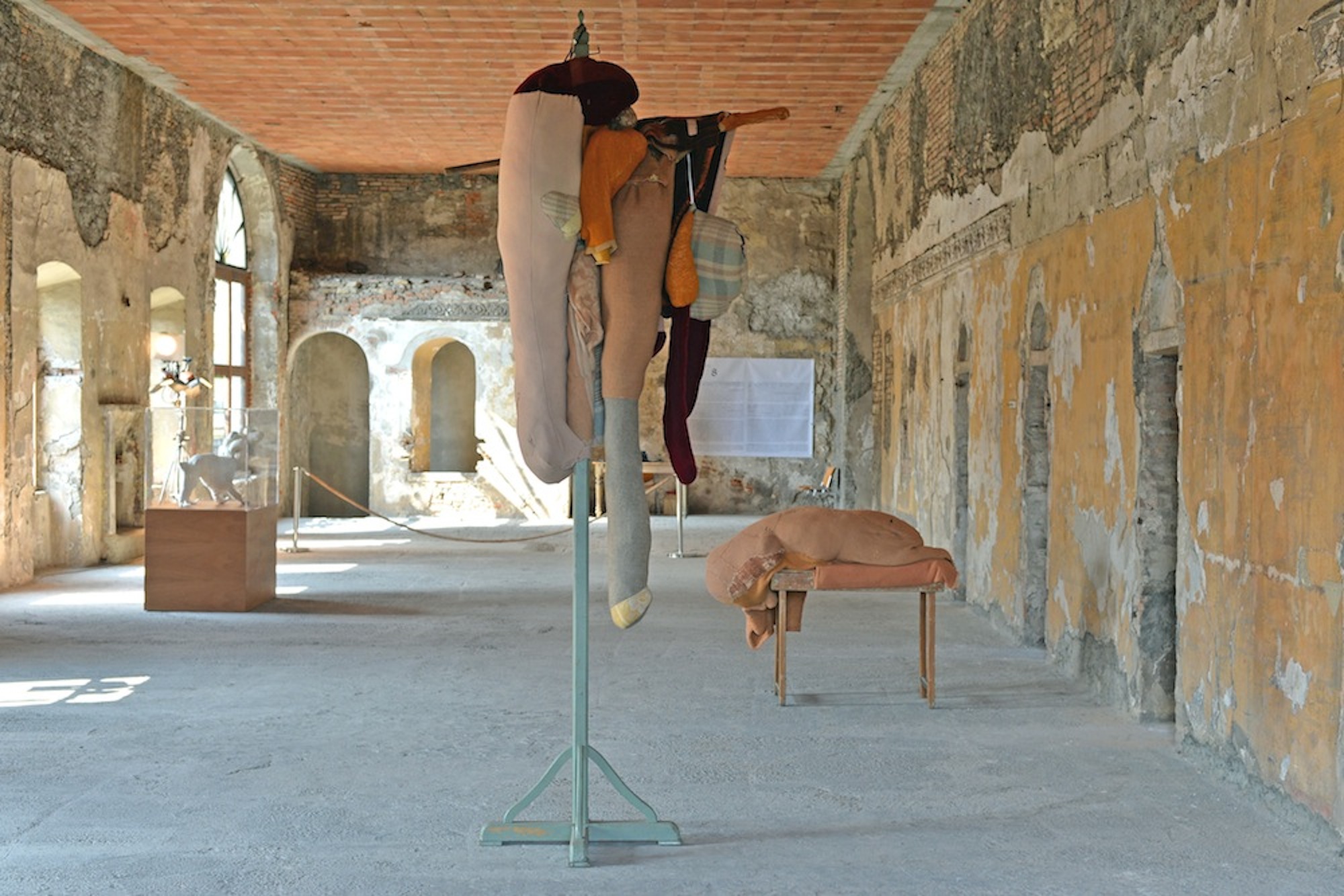 The exhibition is the result of a selection of works that hint at contradictions and phantoms, anthropomorphisms and arts and crafts, and hence cast a new light on concepts such as belonging and difference.
The focus of the exhibition heralds and involves the time an entity becomes domestic and cultural – that is, the moment when preys may become hunters, and hunters preys – and highlights how thin the edge between humans and animals is. When addressing magical animals, or animals that keep their wild nature, the human species projects its anxieties, wishes, rebellions and aggressions against those things that look difficult or impossible to understand or tolerate. Every time, these projections help make the difference in our self-identification process against ‘the other’ or conversely undermine that difference – in so far as preys may become hunters, and hunters preys.
contemporary locus 8 takes place in a site that has never been opened to the public: the wide rooms at the piano nobile of the Carmine Monastery. Etienne Chambaud’s Contre-Dépouille (Undercut, 2012) presents itself an art barrier made of reverse python leather, is displayed at the entrance of the first wing. It compels visitors to ponder, before crossing the exhibition’s threshold. Evgeny Antufiev’s Untitled (2013), located in the same room, is a powerful reconstruction-representation of an exchange among history, imagination, anthropology and memory. At the far end of the wing facing a panoramic view, two landmark works by Berlinde De Bruyckere (Animal and Z. T., 2003) remind us of the aching and never-ending transformation of our bodies.
The second room, orthogonal to the first, is where the Atelier dell’Errore holds sway. The Atelier has always been keen on representing magical animals. Large drawings, and a purpose-made video, feature the anthropophagous animals that have starred as mental and visual creations in the work of the Atelier for more than twelve years.
The wide gallery that was the main entrance to the Monastery belongs to different properties, and has been closed for centuries. Now it’s accessible again.
The exhibition and the exploration of the site are accompanied by the contemporary locus 8 free app for Iphone and Ipad, developed by Elisa Bernardoni, with both Italian and English texts and images to expand on the works, artists and history of the location. 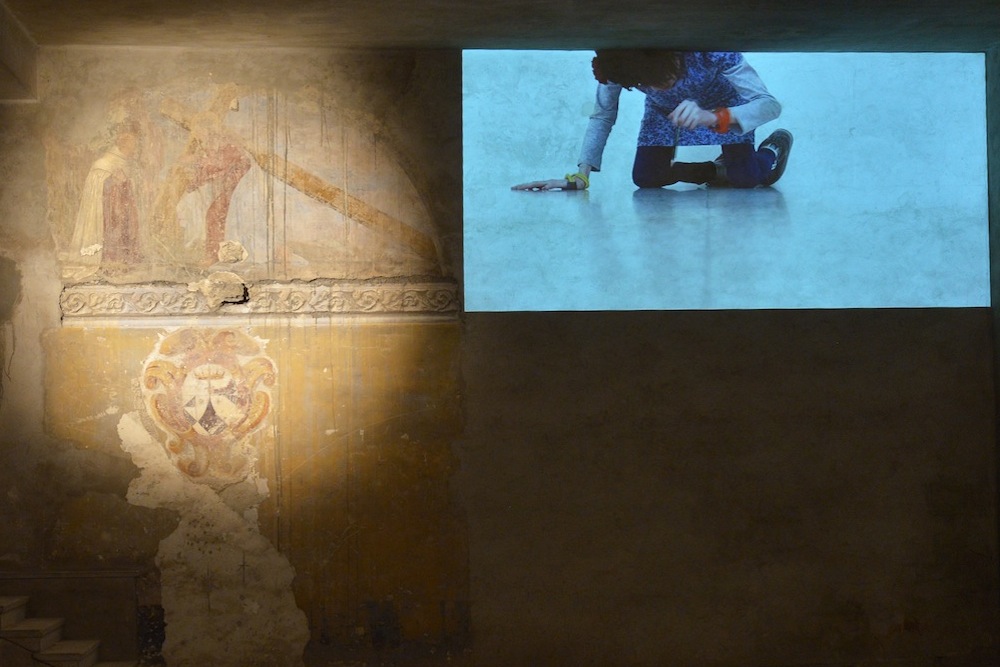 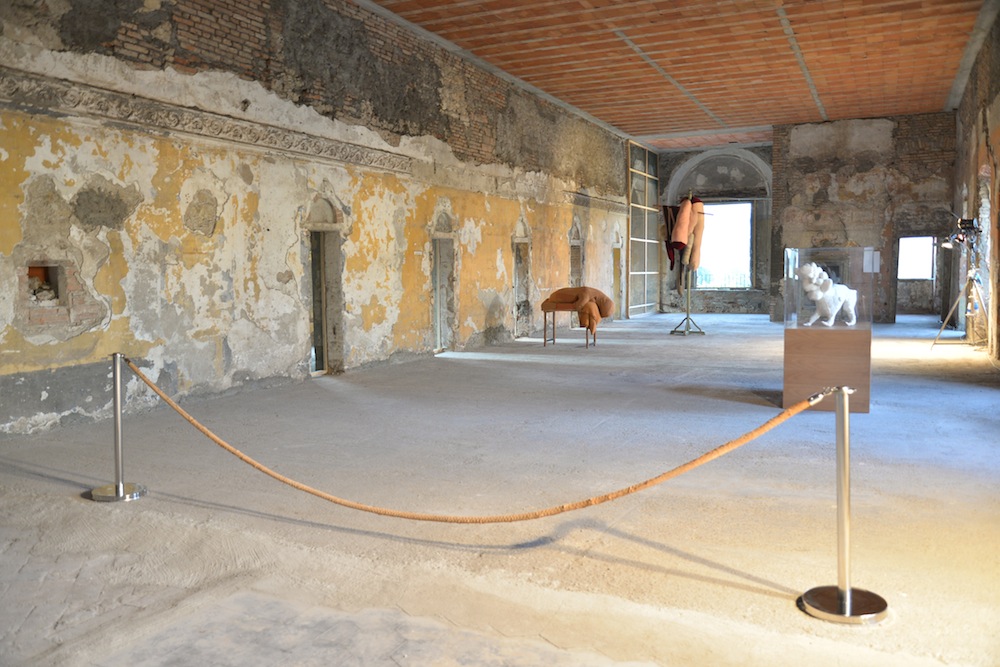 Atelier dell’Errore
The Atelier dell’Errore was founded in 2002 at the initiative of visual artist Luca Santiago Mora for the children in the care of the Reggio Emilia children’s neuropsychiatry department.
In 2011 the Atelier became an ONLUS (non-profit organisation) at the will of the parents and children attending the Atelier, aiming to promote the work done in Reggio Emilia and propose the experience gained to other similar situations in Italy. In 2013 the Atelier was inaugurated also in Bergamo, at the city’s children’s neuropsychiatry department. Recently the Atelier dell’Errore BIG was founded, a specialist training and vocational school working in the field of Visual Arts, open to those who attended the Atelier dell’Errore for many years and who, turning 18, no longer have the possibility to continue the activities and cultivate their artistic talents here. Atelier dell’Errore BIG is self-funded through projects linked to the world of the visual arts, publishing and image, and since January 2015 has been housed at the Collezione Maramotti in Reggio Emilia.
Atelier dell’Errore has taken part in many contemporary art exhibitions and events in Italy and abroad: in 2014, Giulia Zini won the contest Edward 6, Art in Disability, an international prize awarded every four years by Augustinum Stiftung and Buchheim Museum (Munich).
At the Atelier the drawings are often created in groups, so the works can be defined a collective artistic production; an interpersonal experience, a kind of social sculpture.
There are just a few, strict rules at the Atelier: no rubbers – every mistake has its value – and animals are the only subject of the children’s works.

Monastero del Carmine
The Carmine Monastery is clear evidence of the historic layers and their superimposition in the urban texture of the Upper Town. The building went through several construction stages, from the early XIVth century when the Humiliati friars had a church built over remains of the ancient Roman walls. The church passed on to the Carmelites in 1357, to be renovated and enlarged one century later. It was then that the Monastery took on its layout.
The structure underwent ongoing renovations since the early XVIth century. The church of Saint Agatha of the Carmel, originally XVth-century, was given Baroque decorations by Giovan Battista Canina. The wings that hosted the friars’ cells also underwent modifications and renovations, and were lastly turned into the two current wide rooms at the eastern and the southern ends of the piano nobile.
The Carmelites abandoned the Monastery in the IXXth century and decay set in throughout the XXth century. It was only from the 1970s that structural works were carried out. The building was included in a detailed plan of recovery of the Upper Town, complying with environmental, cultural, and historical-artistic protection standards. A restoration plan to give the Monastery new functions, is still on hold. The cloister and some rooms on the ground floor, however, have been reopened and put to good use since 1996, thanks to the TTB – Teatro Tascabile di Bergamo. The TTB headquarters are located here, and act as a research and education center to promote contemporary theatrical culture. 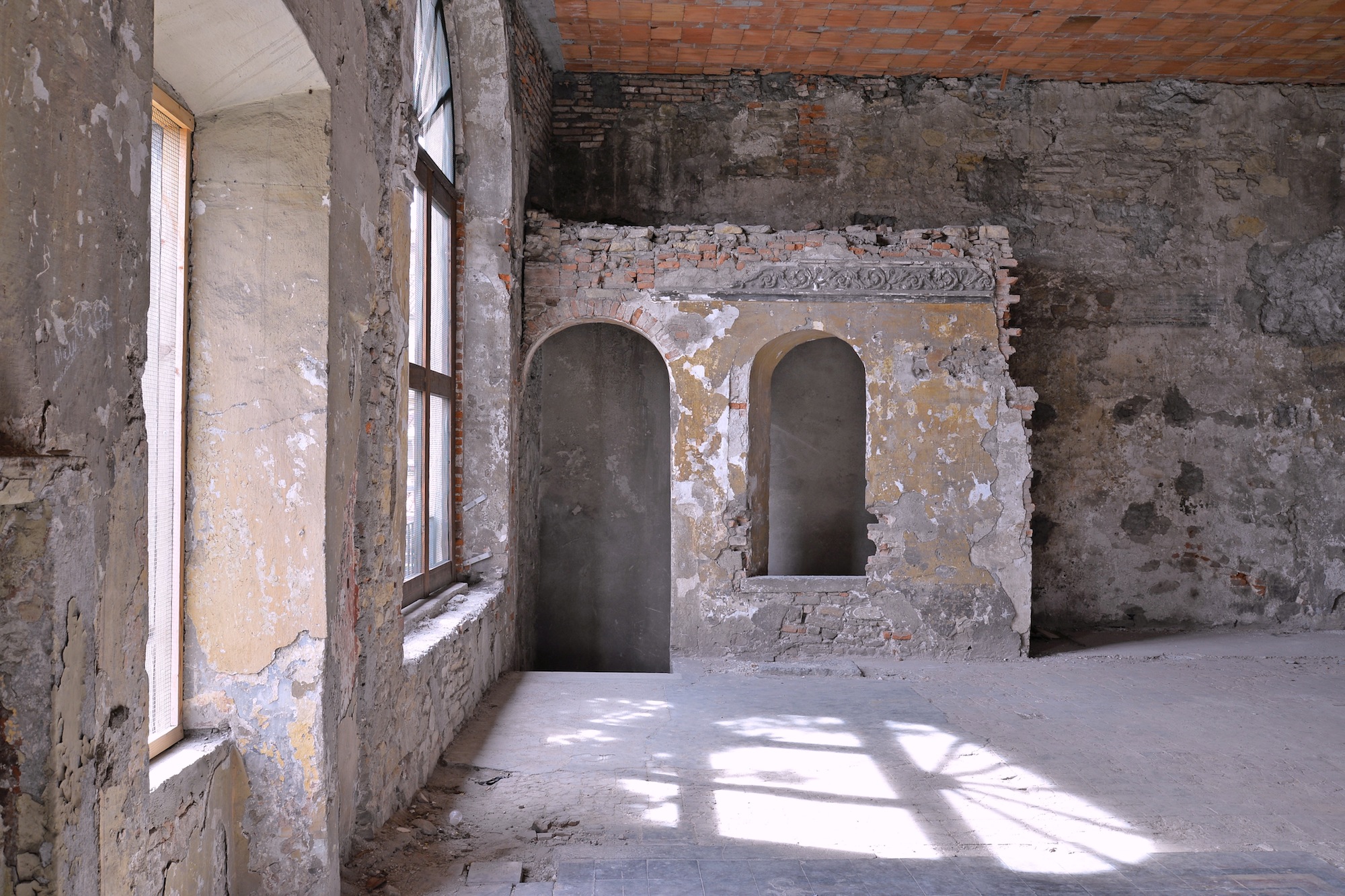 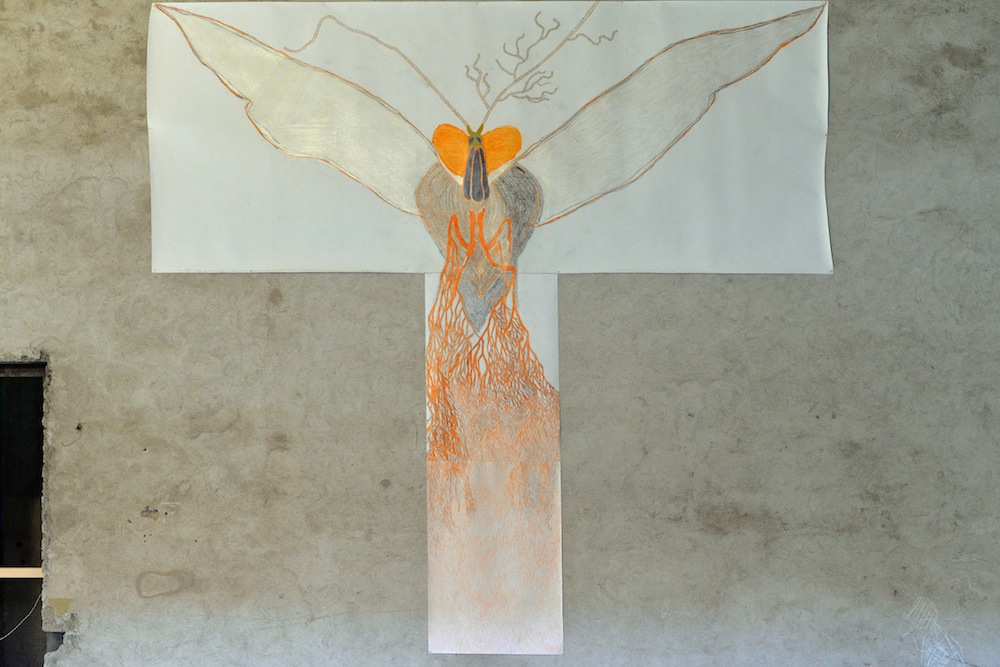 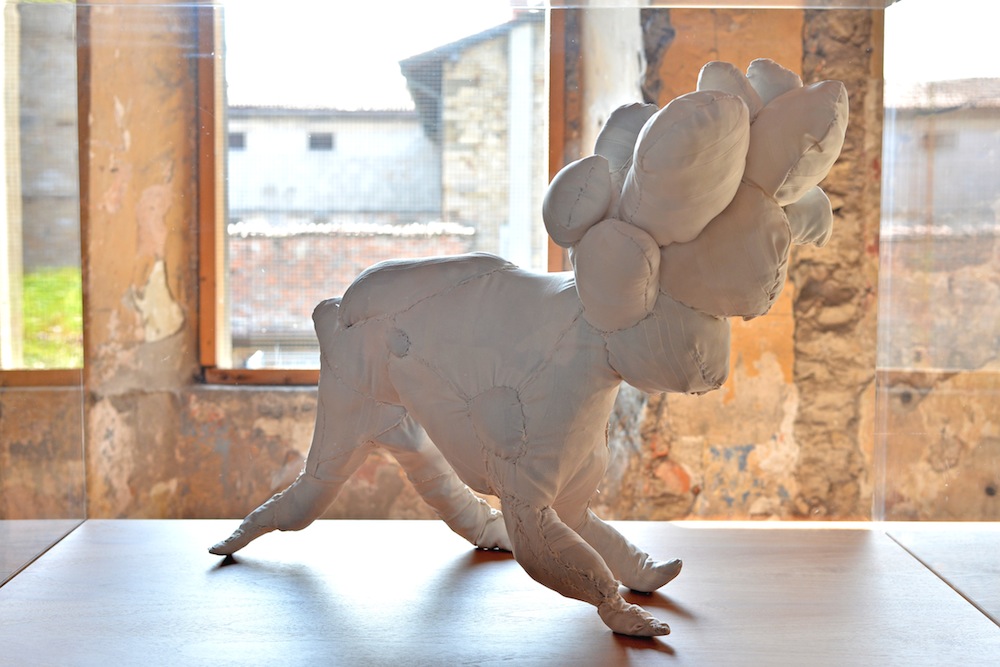