Contemporary locus 5, curated by Paola Tognon, continues the the itinerary of interpretation of the urban fabric through contemporary art, inside the secret space of a Roman domus dating back to the I-IVth century AD.
Involved in the secrecy of the space, Tony Fiorentino (1987), a young artist who is already active on the international scene, faces one of the most precious and well preserved places of the ancient city, an important Roman domus discovered and brought to light in Bergamo in the sixties thanks to the work of the architect Sandro Angelini (1915 – 2001). Over more than five months of activity and  short residencies, Tony Fiorentino investigates the place to gather suggestions of unveiling through artistic practices and works that create relations between history, old traces of life and civilisations within a modernity that is poetically highly evocative.
The artist takes us inside the Domus di Lucina and casa Angelini through a journey of site-specific works based on the concept of unveiling, of transformation and the recovery of old and recent memories. 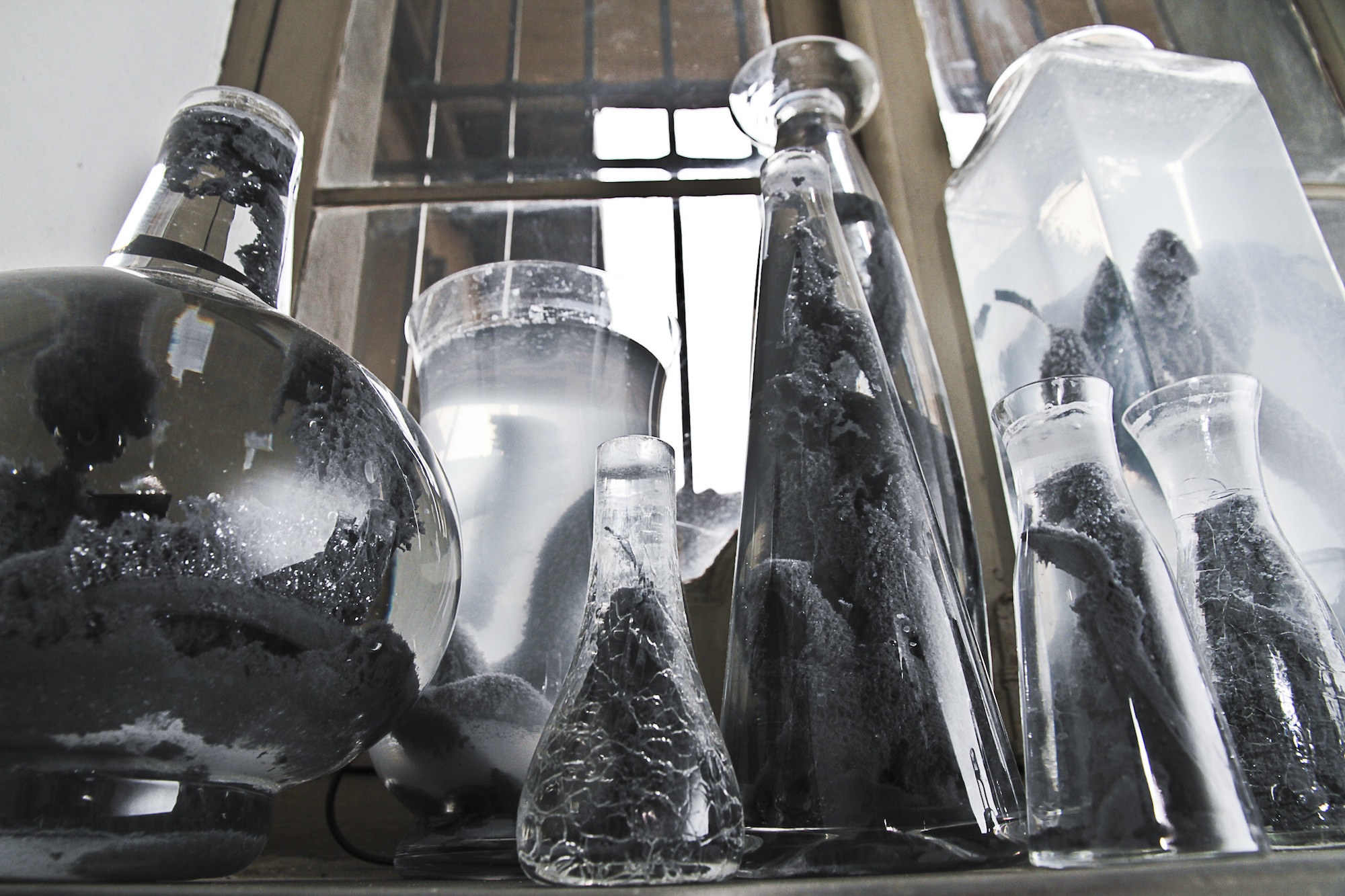 Simultaneously alchemical processes of poetic nature and of ancient memory as well as objects and images inhabit the domus and in the spaces of the ancient Angelini house, creating an itinerary of strong tension where the artist designs a process of appropriation and interpretation of the site, of its history and current identity.
In the monumental hall we find Melancholy Rocking Horse an installation of sculptures that change over time and contain lead, zinc and glass: an elaboration of an old alchemical recipe already known in the Roman era. Thematically linked to the series of Melancholiae are the works on paper: thin engraved signs that define a potential ideal form for the sculptures.
The descent to the Domus Lucinae is then the fundamental step into the exhibition: with the work of light Infernotti, Tony Fiorentino implements a silent process of restoration of the place through the unveiling of bright light that brings back to life the ancient Roman house. In the adjacent room, connection between the domus and the ancient courtyard of the Angelini house, the video work Candle is projected, a tale that, in contrast to the work in the Domus, hides daylight through a process of substitution and transformation of the natural elements: an ice candle burns without a glow allowing its unused wick to fall to the ground.
In the wide staircase that brings us back to the street level, are two new sculptures by Tony Fiorentino – I Like An Arch and Do You Remember? – in which marble proclaims and camouflages its history and tradition: a high stele made with the marble that was recovered from the cathedral of Milan and scaled-down fangs,  carved and coloured inside the marble so as to resemble ivory.
contemporary locus 5 is therefore an occasion to visit, through the poetic alteration of space, light and space, a place with an ancient history but normally closed to the public.
The exhibition and the exploration of the site are accompanied by the contemporary locus 5 free app for Iphone and Ipad, developed by Elisa Bernardoni, with both Italian and English texts and images to expand on the works, artists and history of the location. 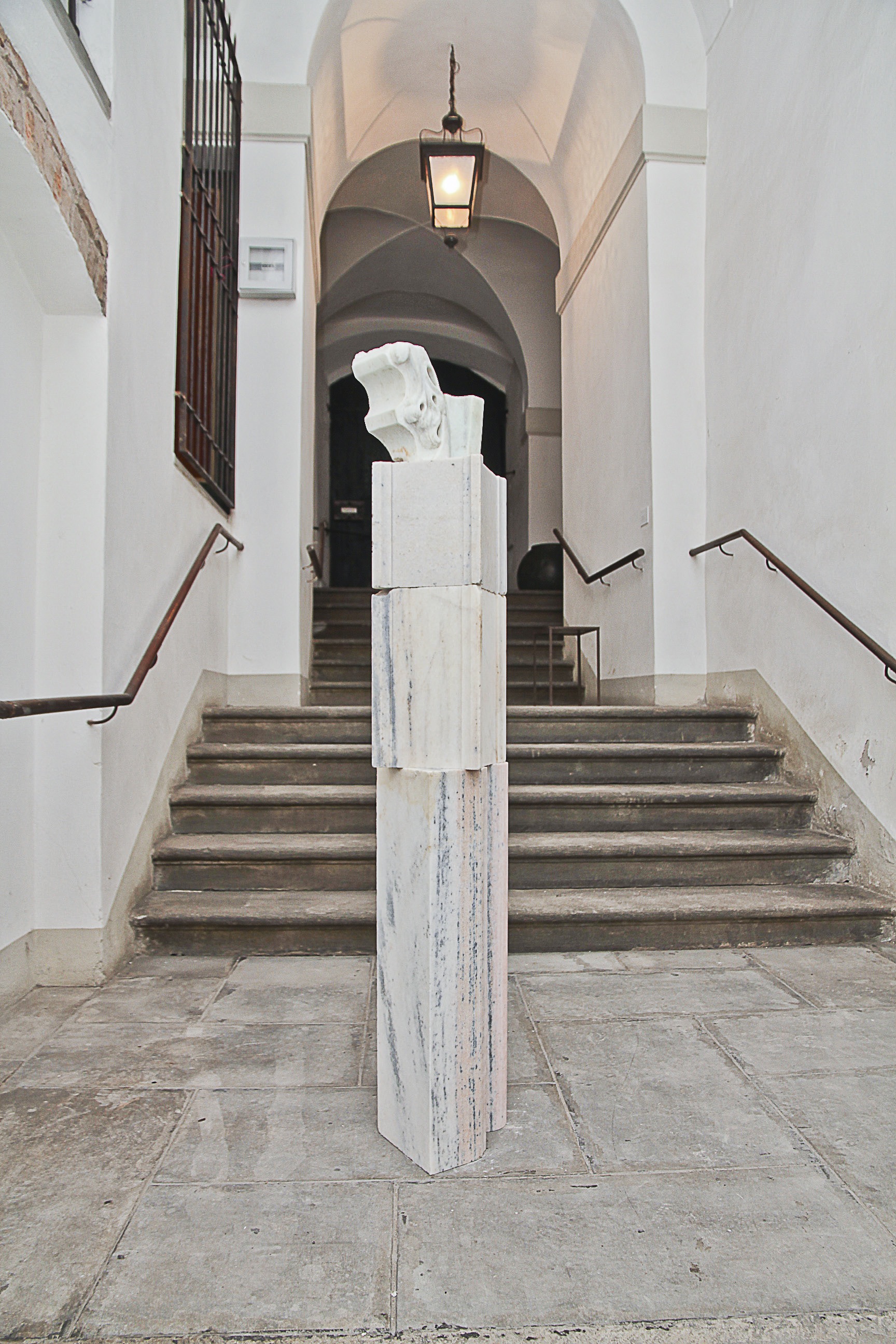 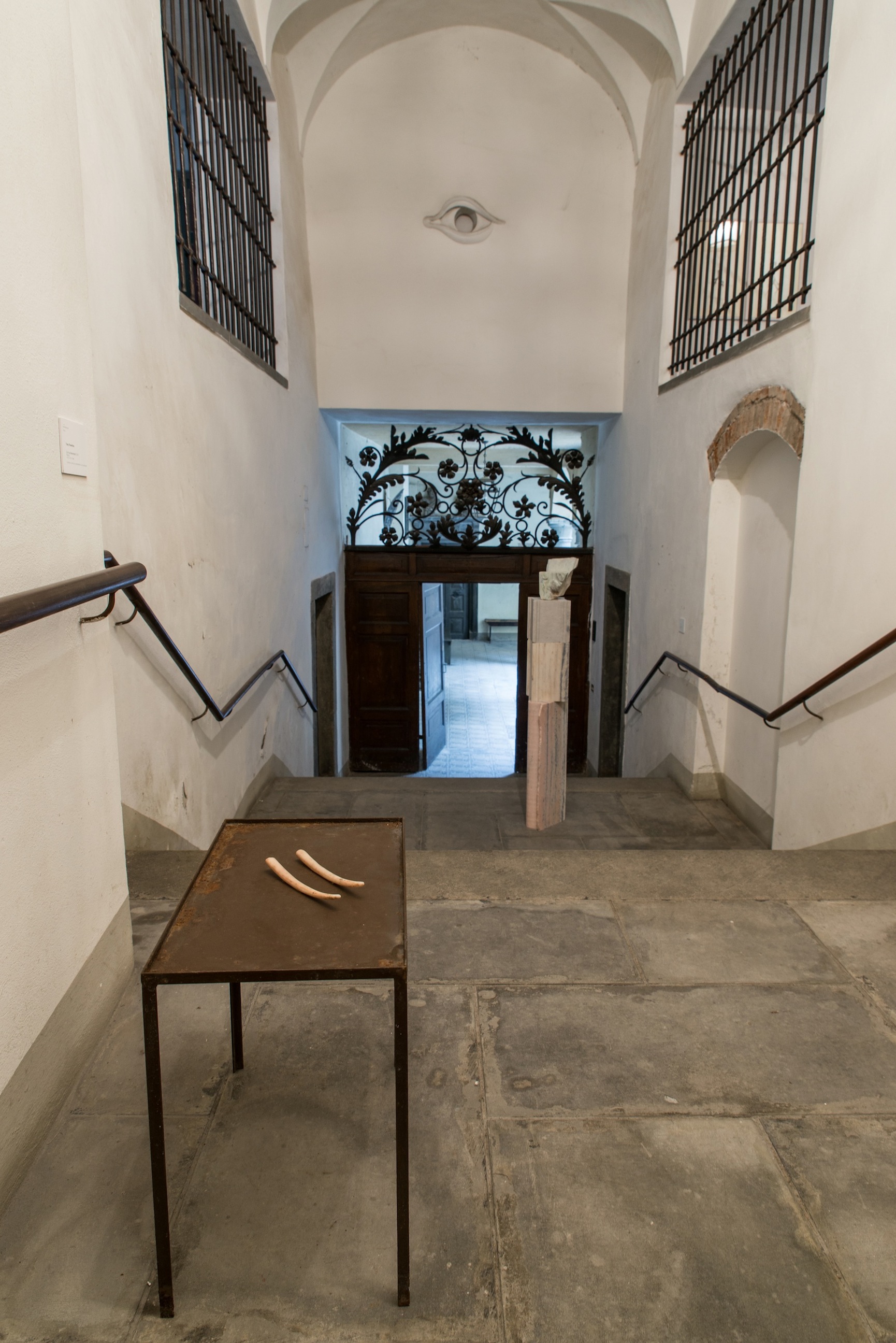 Tony Fiorentino
Born is 1987 in Barletta, he lives and works between Milan and London.
After his studies, Tony Fiorentino moves to Carrara, where he attends the School of Fine Arts and founds Boom Boom, a space devoted to the organisation of emergent artists. He moves to Athens thanks to a scholarship and in Amsterdam he has the chance to assist artist Giorgio Andreotta Calò during his Rijksakademie Van beeldende kusten residency. Back to Italy after his international experiences, Tony Fiorentino is known for his multidisciplinary artistic practice. It is a practice that is oriented towards the discovery of the poetic and symbolic values where objects, thoughts and actions are bearers, and are formally restored by essential compositions of a strong poetic and narrative impact.

Domus di Lucina
The domus in via arena was discovered between 1963 – 65 thanks to an excavation that took place inside the home of the Angelini family, already the Medieval tower of the Migliavacca family. In the cellar emerged the remains of a Roman residence, dateable between the I – IV century d.C., named domus di Lucina by the name graffitied on a black clay bowl that was found on site. The domus today constitutes one of the most important archaeological finds of Northern Italy. The excavation brought to life stone masonry structures belonging to three rooms. The perimeter wall, placed against the rock of the hill, and the visible intermediate walls, delimited a courtyard that probably had a porch given the presence of a brick column and a small room, it could have been a service area such as a kitchen. Finds that were discovered suggest the presence of a small thermal plant placed as the rest of the emerged surface, in function of the overlying residential environments.
The restoration of discovered fragments led to the reconstruction of valuable frescos and mosaic surfaces which are now on display at the Civic Museum of Archeology of Bergamo (Piazza della Cittadella n.9) together with bowls, pans, bottle fragments, the famous bowl of Lucina and some oyster shells which have been interpreted as the remains of a meal.
With the fall of the Roman Empire the building was abandoned and collapsed on itself. During the Middle Ages the surface w
as leveled out and foundations were laid for the Migliavacca dei Rivola tower. In the XV century it became property of the Priacini family where in the houses that enclosed the tower, the hospital Misericordia Maggiore (MIA) was instituted. The charitable – welfare purposes of the building were illustrated by the façade frescos, the surviving parts have since been detached, restored, preserved and are now visible inside the palace itself. With the transfer of the hospital, the houses then hosted the Chancellery hospital and subsequently the first musical high school of Lombardy. In 1803 the Congregation appointed the house to Simone Mayer for charitable lessons in music. In 1876 the house was turned again into a private residence, firstly purchased by the Bonicelli family and then by the Angelini family in 1960. 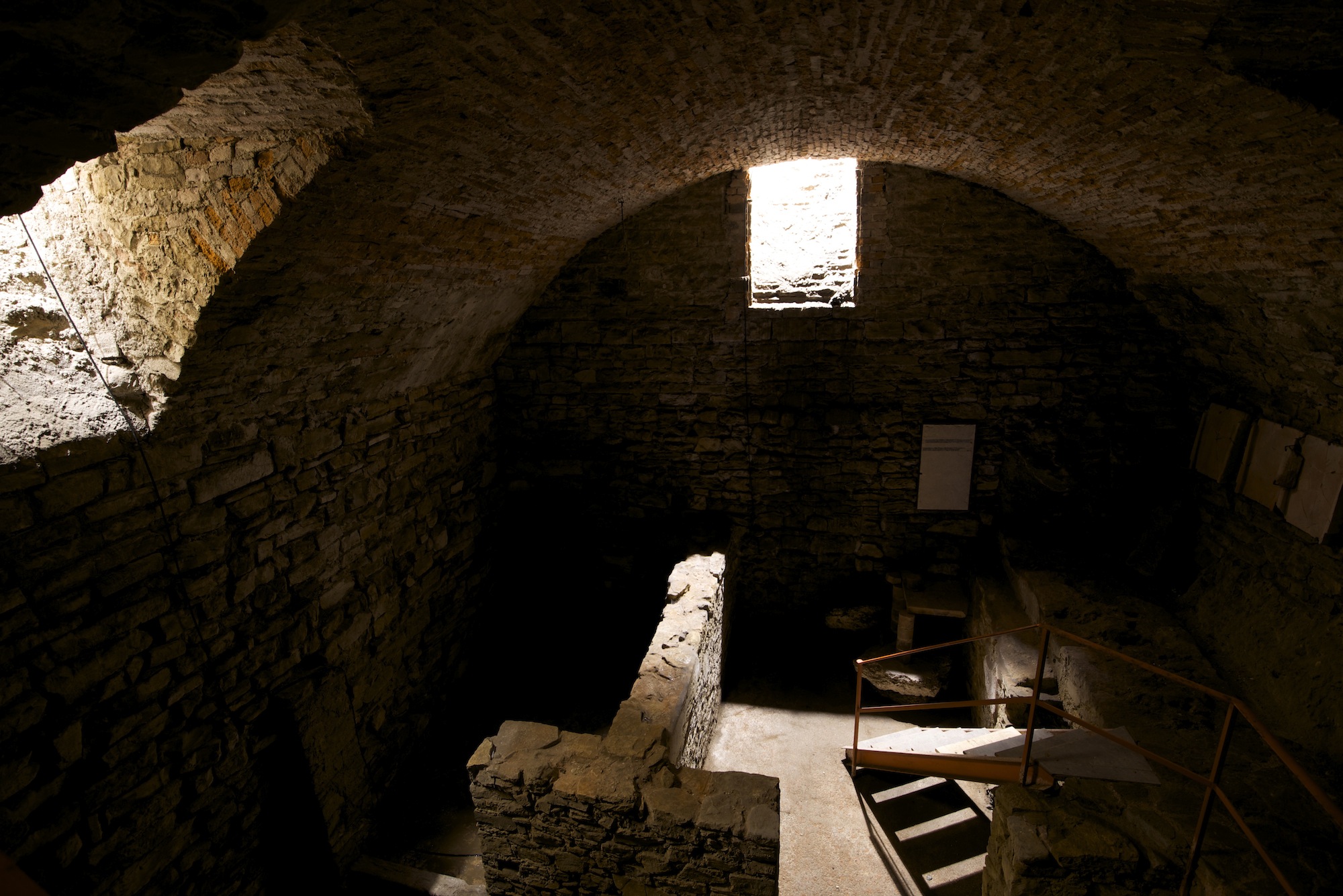 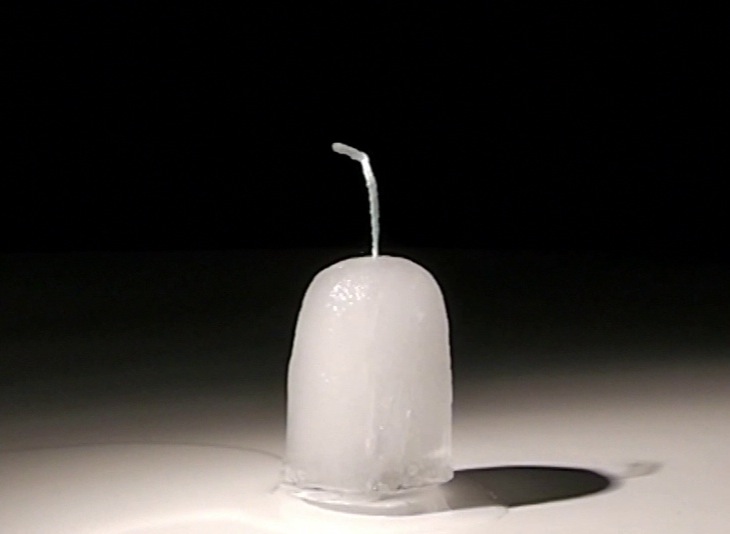 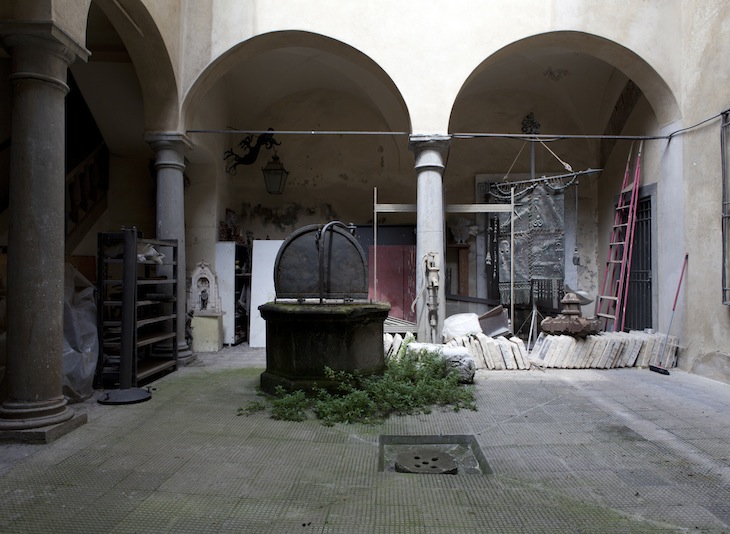