Contemporary Locus invites artists, from Italy and abroad, to unveil and interpret with site-specific projects abandoned or secret places. After the former church of San Rocco, reopened after eighty years, it is now the turn of Porta Sant’Alessandro – a historic gate into the old city along the imposing circle of the Venetian Walls. Empty and closed to the public since the beginning of the XXth Century, dismissed its functions as custom, it reopens today and awakens its past for the seventh edition of contemporary locus, curated by Paola Tognon, with works by Davide Bertocchi (1969) and Heimo Zobernig (1958).
The four city gates are entryways to the medieval heart of Bergamo Alta, and form a conspicuous urban system with the Walls, contributing to the image of the town and its identity over time. Construction works for the Sant’Alessandro Gate started around 1560, and required the Early-Christian basilica of Saint Alexander of Bergamo, the town’s Patron Saint, to be torn down. The Magistrale waterworks runs through the Gate, which has three passageways for pedestrians and vehicles. Its outer front is made of grey sandstone and yellow stone from Castagneta. The magnificent garret room, preciously covered in wood and used as a toll station for centuries, remained empty and closed to the public until the early 20th century. 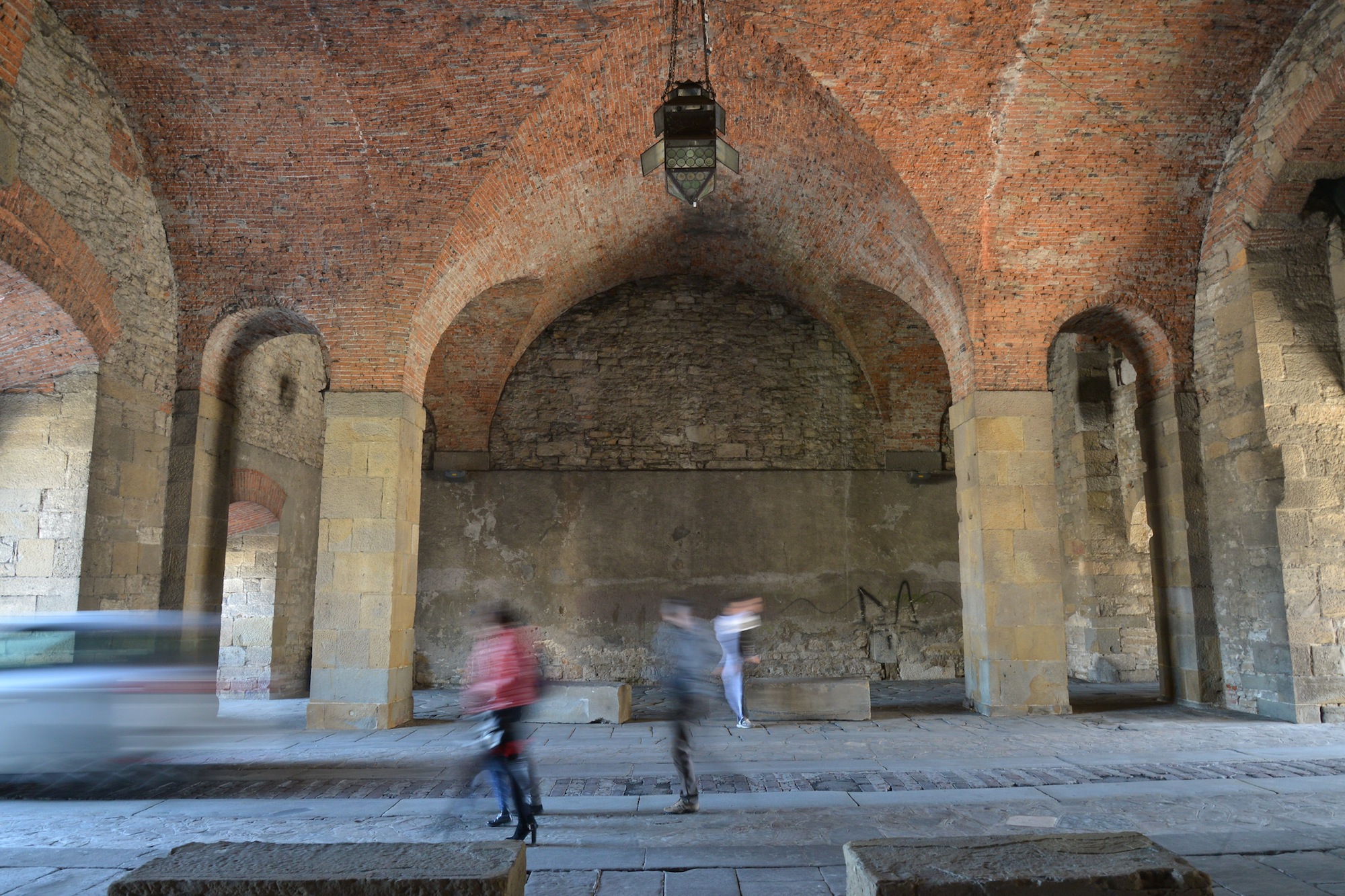 The artists have taken over the room in different, yet complementary ways. Bertocchi interacts with the site relying on sound, connecting past and present, and the upper section – secret and silent – with the lower – busy and lively. Polyphonic Door, title of the site-specific installation, is operated by a sensor. By crossing the lower section of the Gate, passersby and vehicles activates a digital audio system placed in the empty room upstairs. The sounds of this immaterial architecture originate from the organ of the basilica of Santa Maria Maggiore, its notes and chords recorded and selected to be played in the room and produce unexpected tunes and themes.
At a metaphorical and practical level, Bertocchi’s work turns the mighty building – for centuries a crossroad of people, goods and water – into a huge, man-operated musical instrument. The life of the site actually depends on folks and cars crossing the vaults downstairs. The Gate becomes an inhabited and resonant architecture.
The large-scale installation by Heimo Zobernig takes control of the room with eleven independent modules made of Murano blown glass, a valuable material that is a reminder of the Venetian roots of the Porta Sant’Alessandro.
The work Untitled takes shape by playing with forms, lights and colours. Eleven large, ruby-red, hand-blown spheres connect the floor with the mighty trusses that support the hipped roof. The shapes resonate in precious glass and hues, resembling dimly lit lanterns evocative of the site’s history. The essential artwork – a hanging, illuminated hand-made installation – presents its abstract and minimal set-up to visitors, and provides a classical dimension that breaks the room’s long horizontal lines.
The exhibition and the exploration of the site are accompanied by the contemporary locus 7 free app for Iphone and Ipad, developed by Elisa Bernardoni, with both Italian and English texts and images to expand on the works, artists and history of the location. 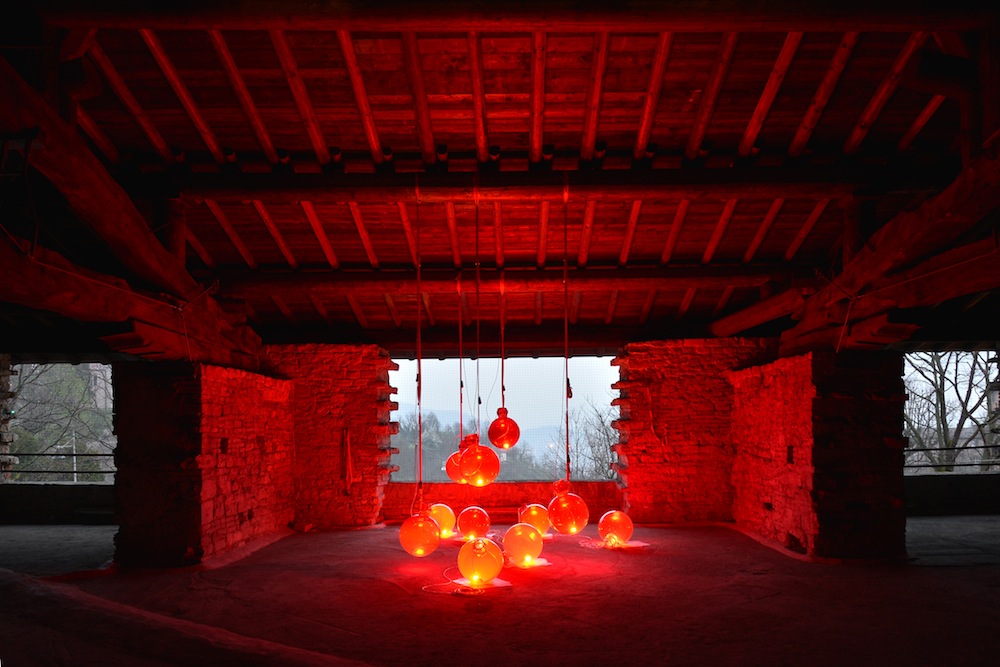 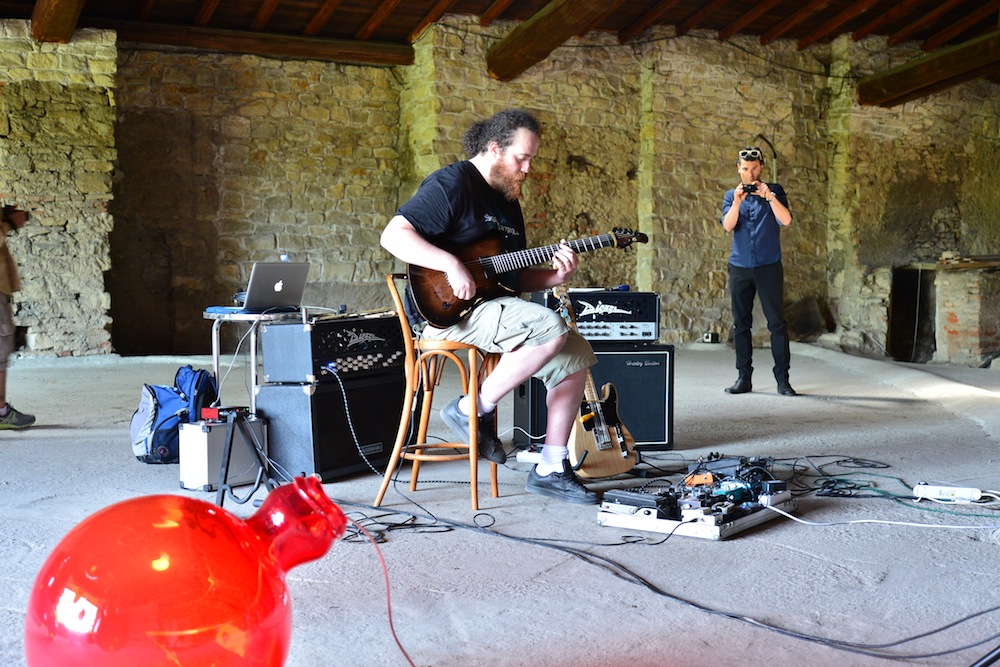 Davide Bertocchi
Born in 1969 in Modena, he lives and works in Paris.
He studies at the Academy of Fine Arts in Bologna with Alberto Garutti, and at the DAMS (Discipline Arte Musica e Spettacolo) at the University of Bologna. From 1993 to 1994 he studies at the Hogeschool voor de Kunsten in Utrecht, Holland, where he starts experimenting with sound and music. In 1996, after a period in New York and Los Angeles, Bertocchi moves to Milan and settles in Via Fiuggi. The basement, converted into a work and living space, is shared by several contemporary artists – i. e. Diego Perrone, Giuseppe Gabellone, Debora Ligorio, Sara Ciraci, Simone Berti, Stefania Galegati, Ettore Favini and Lara Favaretto – and has been later on considered as the starting point of a new art scene in Milan. From 1998 to 2000 Bertocchi lives in the Milanese home of Maurizio Cattelan, who encourages him to apply for an artist residence program at the École de Beaux-Arts of Nantes, France, directed by Robert Fleck, Stephanie Moisdon and Philippe Lepeut. In 2000, Bertocchi is chosen among the ten Italian artists for the Studio Program at the MoMA PS1, New York. In 2002, he is a resident artist at the École Nationale Supérieure dArts at Villa Arson in Nice, France. From 2003 to 2004 he takes part in the artist-in-residence program Le Pavillon at the Palais de Tokyo in Paris.

Heimo Zobernig
Born in 1958 in Mauthen (Carinthia), he lives and works in Vienna.
His research spans from painting to sculpture and from videos to installations. He is considered a master of the Austrian Minimalism, and his teaching at the Akademie der bildenden Künste Wien has influenced several generations of Northern-European artists.
Zobernigs works have been exhibited in some of the most prestigious exhibitions at an international level, like the Venice Biennale (1988, 2001), where he represents his country at the Austrian Pavilion in 2015, the Documenta in Kassel (1992, 1997) and the Skulptur Projekte Münster (1997). The list of his many retrospectives and solo exhibitions includes those recently held at the Museo Reina Sofía, Madrid (2012), the Kunsthaus Graz (2013), the Mudam Luxembourg and the Kestnergesellschaft, Hannover (both 2014).

Porta Sant’Alessandro
Porta Sant’Alessandro is one of the four city gates in the Walls that encircle the Upper Town, or Bergamo Alta. It is located at Colle Aperto (literally, “Open Hill”), the site from which the ancient road to Lecco, Como, the villages in the Valle di San Martino and the Adda river leads off. The Walls were erected between 1561 and 1588 by commission of the Serenissima Republic of Venice that ruled the town at the time. Since then, together with the four gates – Sant’Agostino, San Giacomo, San Lorenzo, and Sant’Alessandro – they have formed a conspicuous urban system, unaltered over the centuries, which has strongly contributed to the image of Bergamo as a city of art. A symbolic as well as physical boundary, the Walls were intended to protect the western border of the Venetian Mainland from the nearby Duchy of Milan, or other potential threats. They were commissioned to engineer Bonaiuto Lorini (Florence, 1537/44-1611), who placed the Gates more or less where their Roman and medieval predecessors used to stand. The Gates took their names from neighbouring churches, of which only SantAgostino survived the extensive demolitions that the building of the massive Walls required.
Sant’Alessandro was a basilica of Early-Christian origins, built in the 6th century on the burial place of Saint Alexander of Bergamo, a martyr and the towns Patron Saint. A storm of protest arose when the church and the houses around were torn down in August 1561.
The building of the Sant’Alessandro Gate resulted in a remarkable integration of architecture, engineering and landscape: in its garret room the Vasi and the Sudorno waterworks were successfully joined to form the Magistrale waterworks, which supplied the town with water. Until the late 19th century Sant’Alessandro was also a toll gate, where charges on goods entering Bergamo were levied. Partitions, planks and parlours gradually set up by customs officers were removed as late as the early 20th century.
The Gate was extensively restored by Ciro Caversazzi in 1915, and a new arch on the northern side was opened for pedestrians in 1952. In 1961, to celebrate the Gate’s fourth centennial, a high relief representing the Lion of Saint Mark, the symbol of the Republic of Venice, was added to the outer front. It’s the work of Piero Brolis (Bergamo, 1920-1978), carved from Zandobbio white marble. The conservation works carried out in the 20th century mainly involved technical elements and materials: the lower section of the outer front is 10 meters high and is in grey sandstone, while yellow stone from the Castagneta quarries was used for the upper section. Mixed reclaimed materials such as stone and brick were chosen for the front facing Colle Aperto.
The Gate has a square plan, and the portico features the same structure as Porta Sant’Agostino’s: cross vault in the central archway and barrel vaults in the side ones entirely made of brick.
The large garret room has a precious, recently restored wooden roof. The room is usually empty, and not open to the public. In the past, it was used as a passageway to reach the Walls’ gardens and to walk along the perimeter of the fortifications.
Porta Sant’Alessandro has retained its historical role over the centuries. It is still is a hub of pedestrian and vehicular traffic, a meeting point that provides leisure opportunities, and an ideal starting place to visit medieval Bergamo. 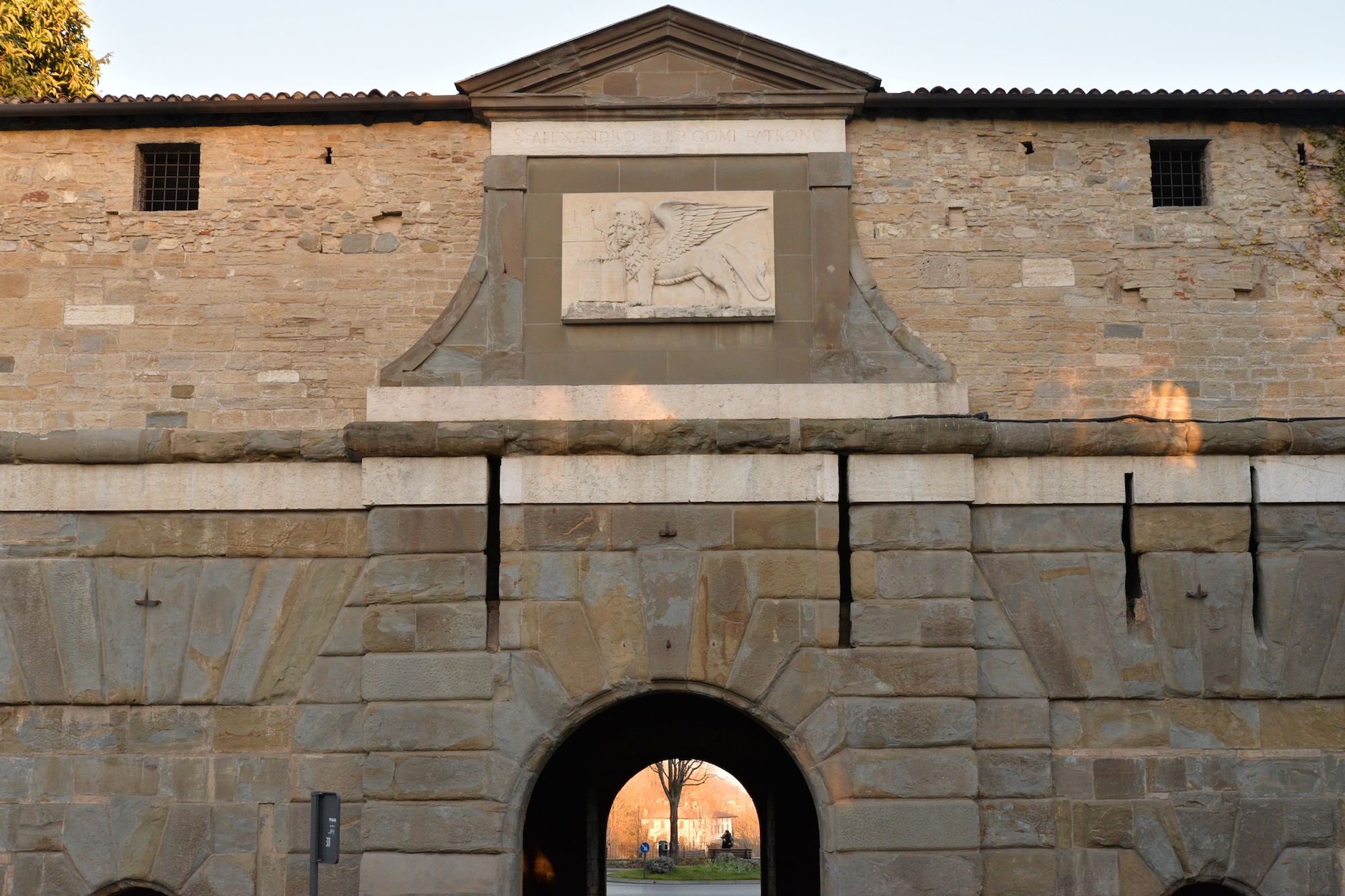 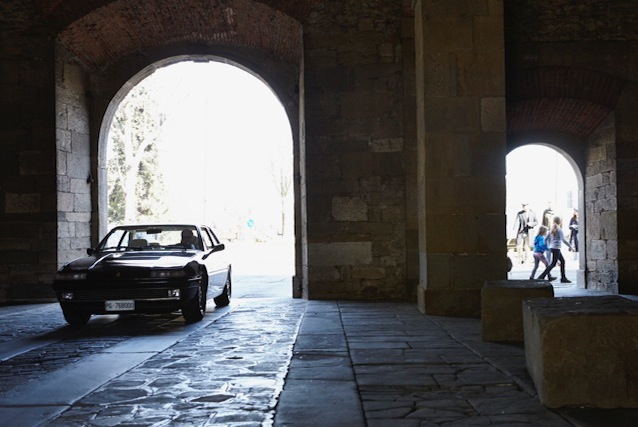 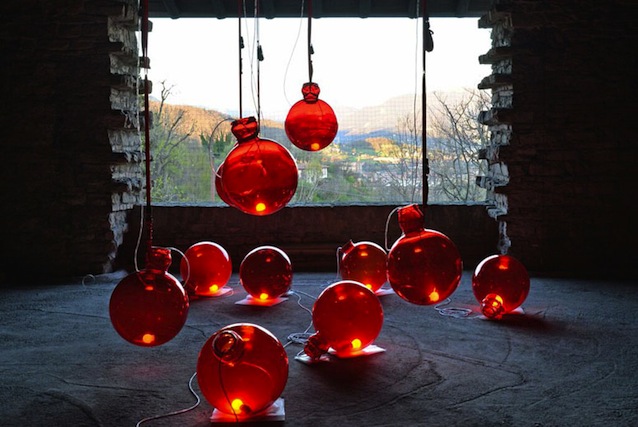