Contemporary Locus 1, curated by Paola Tognon, is the first stage of an exhibition project that builds connections between contemporary art and the urban tissue, reopening secret, forgotten or abandoned sites in the territory of Bergamo. The first edition sees the reopening of Luogo Pio Colleoni, located in the medieval Upper Town.
The two oldest rooms, located on the ground floor and featured by decorative artworks of great importance, accommodate the works of Huma Bhabha (1962), and Francesco Carone (1975). In the Historical Hall the primitive and almost brutalist sculptures of Huma Bhabha are in contrasts with the white figures of the Lombard Renaissance sculpture of Giovanni Antonio Amadeo, whose works are aligned in the room. Both in the work Lecturer (2010), made in bronze, and in Glorious Phantom (2008), created by the assembly of salvaged materials, we perceive clearly Bhabha’s inclination to work on the human figure and its masked icon. 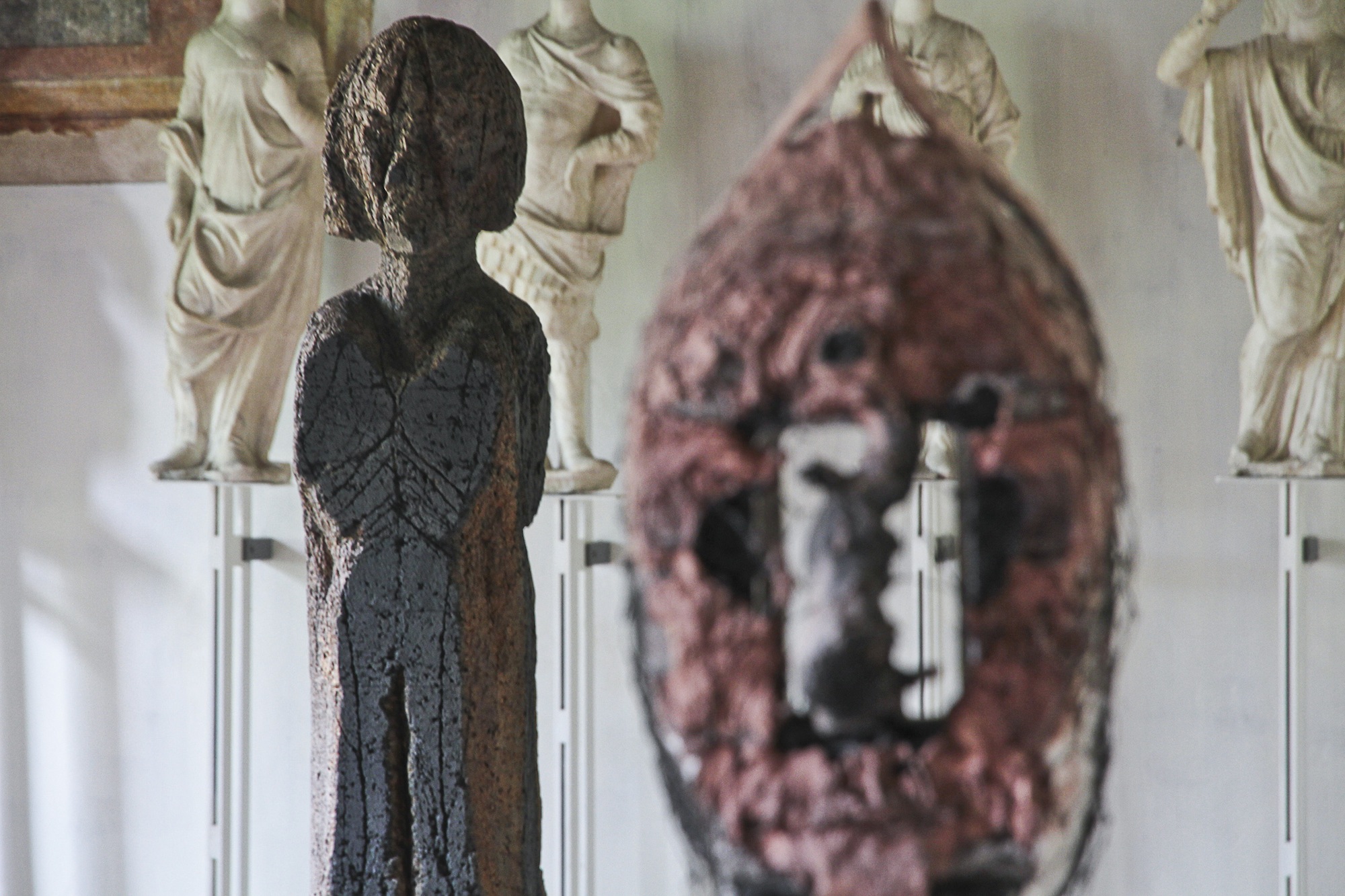 The rigorous narrative of frescoes dedicated to the cardinal and theological virtues in the Council Chamber contrasts with Francesco Carone’s poetics.
The sienese artist has created Scoglio (2012), a site specific work that camouflages with the original condition of the place creating minimum shifts of attention and perception. The long top of white Carrara marble, perfectly superimposed at the Council table, sixteenth-century furniture already present in the room, it is the rock of sculptural nature where the shells applied become poetic testimony of the Colleoni travel between Bergamo and Venice and is a reminder, in the formal structure, the armor with which the Colleoni was represented. Finally, the “flaps”, which marine animals that are able to withstand the most severe weather, were back to the fame of Colleoni as Captain of the Army of the Republic of Venice.
In the Historical Hall, the artist has created a second work, Seme (2012), a wooden carved peach, the memory of a real stone found by the artist in the roof garden of the Luogo Pio Colleoni, during one of the visits to the realisation of the exhibition.
The presence of Bhabha and Carone in Contemporary Locus 1 is a contemporary testimony of different cultures and artistic practices, united by an unparalleled dialogue with the past and let down into secret spaces that opened to the unexpected brightness of an ancient urban garden.
The exhibition and the exploration of the site are accompanied by the Contemporary Locus 1 free app for Iphone and Ipad, developed by Elisa Bernardoni, with both italian and english texts and images to expand on the works, artists and history of the location. 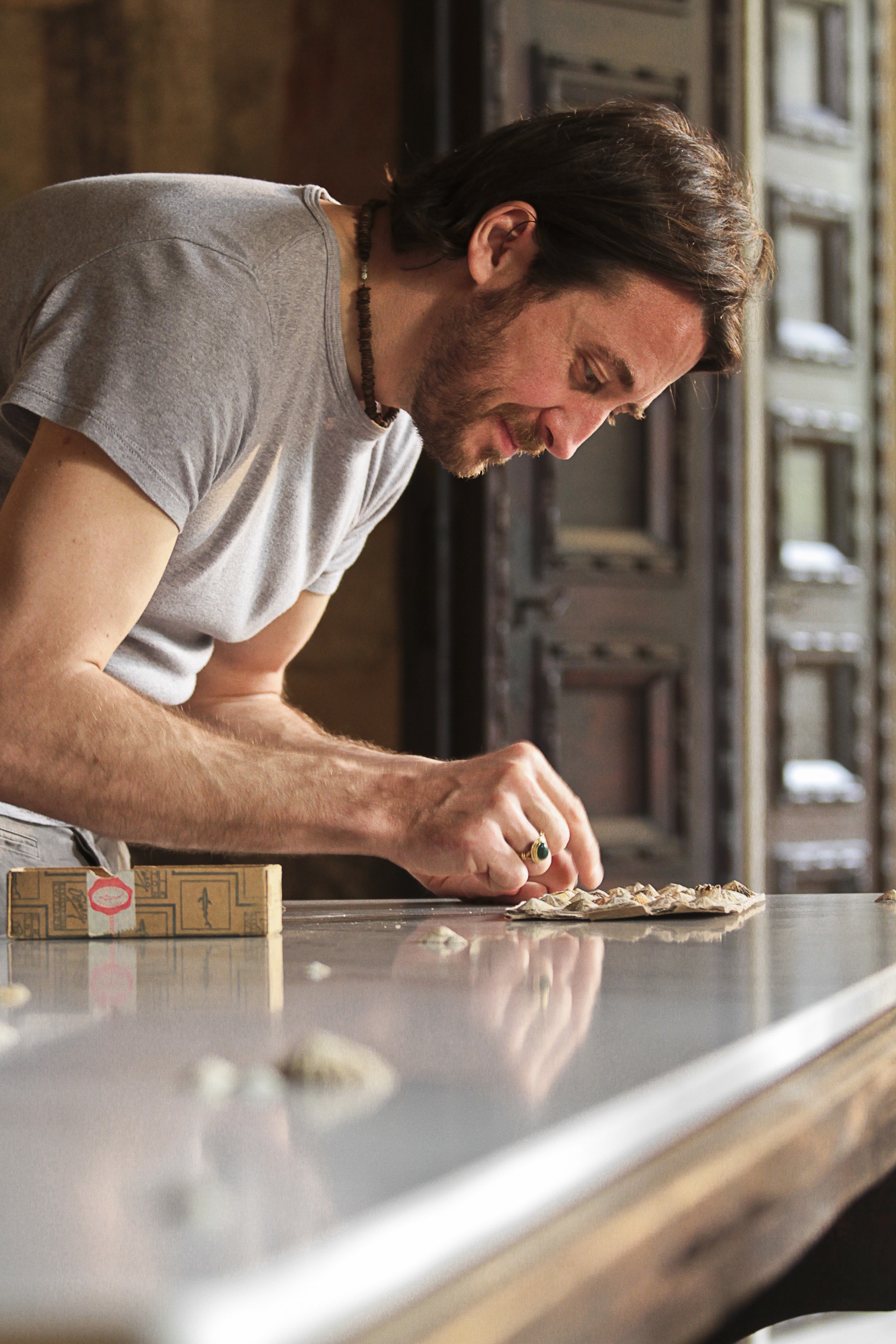 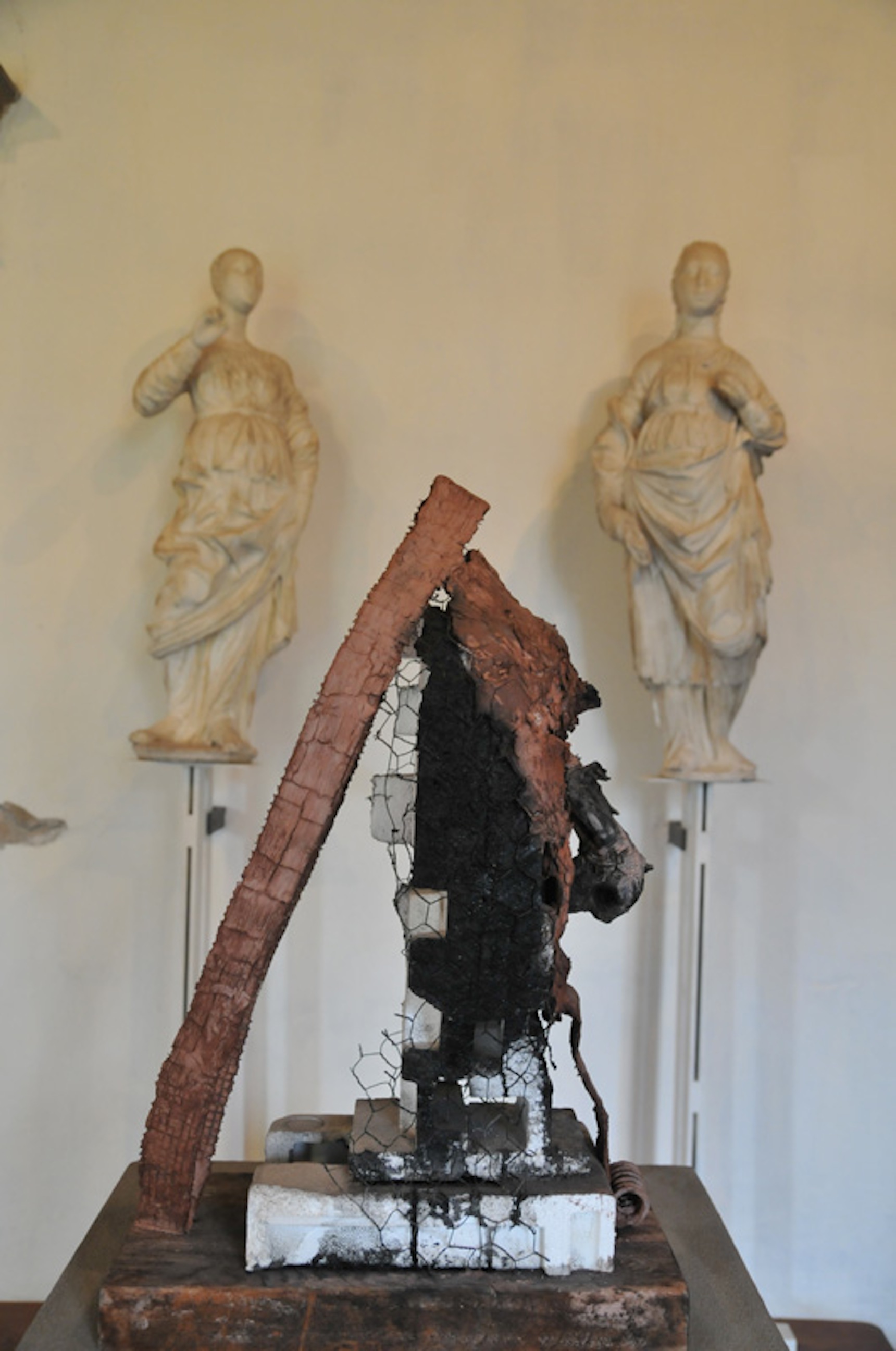 Huma Bhabha
Born in 1962 in Karachi, Pakistan. She lives and works in Poughkeepsie, New York (USA).
Huma Bhabha works primarily with sculpture. Her works are made assembling salvaged materials such as clay, wood, steel, polystyrene and cast iron. There are many references to archaic Greek and Egyptian sculpture, but also to artists such as Giacometti, with whom Bhabha shares extremely intimate and introspective views. Her works has evolved over the years, from vaguely abstract floor works to masks, heads and full-height assembled figures, which often rely on elaborated bases but always tied to the context. Bhabha operates within a largely figurative language, and uses conventional types, the torso and the human figure walking, sitting, or reclining, as a metaphorical basis for an art that, as in science-fiction, tells and simultaneously reveals signs of the discomfort and the unknown. The drawings, prominent since the beginning of her career, return in her later works to support her projects, connecting with sculptural works of which are synthesis and investigation.
Her works are part of the collections of prestigious and international institutions, including: Whitney Museum of American Art, New York, The Saatchi Gallery in London, The Museum of Modern Art in New York, The New York Public Library. In 2008 she wins the Aldrich Contemporary Art Museum Award as best emerging artist.

Francesco Carone
Born in 1975 in Siena, where he lives and works.
Francesco Carone creates installations, sculptures, ceramics and large glasses, through the use of heterogeneous objects of unusual type, rare or common, which the artist collects and transforms, overlapping each other or breaking them into several parts.
Starting from a two-dimensional research, already inclined to the three-dimensionality, his works have recently moved to sculpture and site-specific installations, becoming devices capable of arousing wonder and curiosity in the viewer.
Francesco Carone draws inspiration for his creations from philosophical themes (but especially from the literary world) interweaving them with those of art, science, and the sacredness of human nature. The goal of each of his jobs is to provoke mental and physical reactions in the spectator that take him/her beyond the object he sees, to get a view of the artist’s perception and understanding it.
The structure of each object is moulded according to a process that modifies the original identity: a peach pit becomes the incipit of the creation of a sphere made of stones of various fruits, a four handles stick suggests directions that a man can follow in his life path, or the eighty-six different editions of Moby Dick, neatly arranged on a step, become a dividing line to be crossed. A true threshold beyond which explore the artist’s realm where the rules of the game have been subverted, and each object reveals new relationships among form, function and meaning.

Luogo Pio Colleoni
The Luogo Pio Colleoni was founded in 1466 by the commander Bartolomeo Colleoni, Captain General of the Army of the Republic of Venice, to provide dowries for poor girls and for the completion and maintenance of nearby Colleoni chapel, which celebrated its perpetual officiating.
The ancient and original relationship between architecture, painting and sculpture, the history of its foundation and the role it plays today, as archive of Bartolomeo Colleoni Institute and storage of its artistic heritage, making it one of the most intense secret spaces in Bergamo. 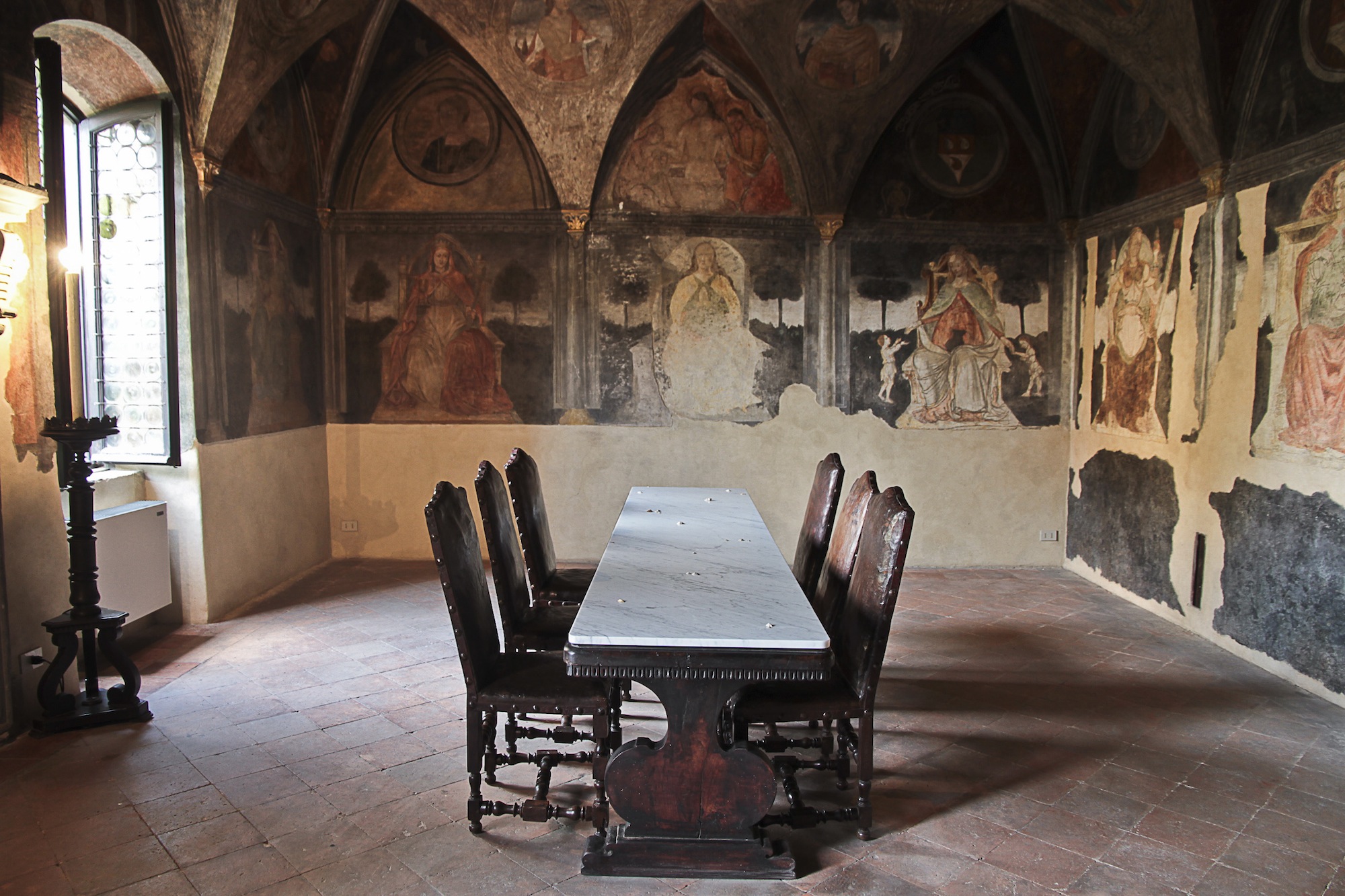 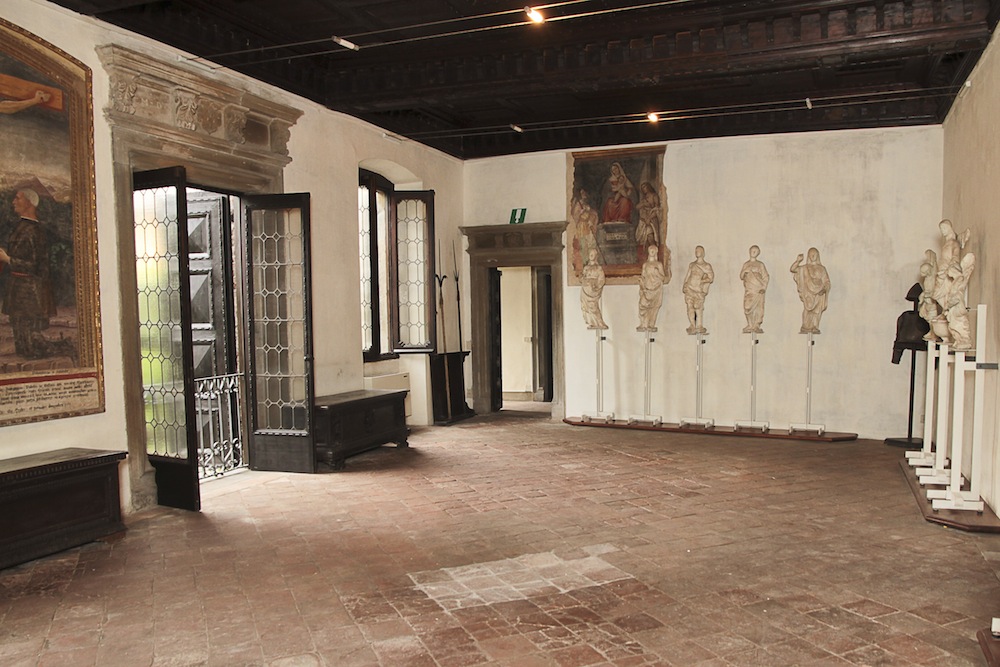 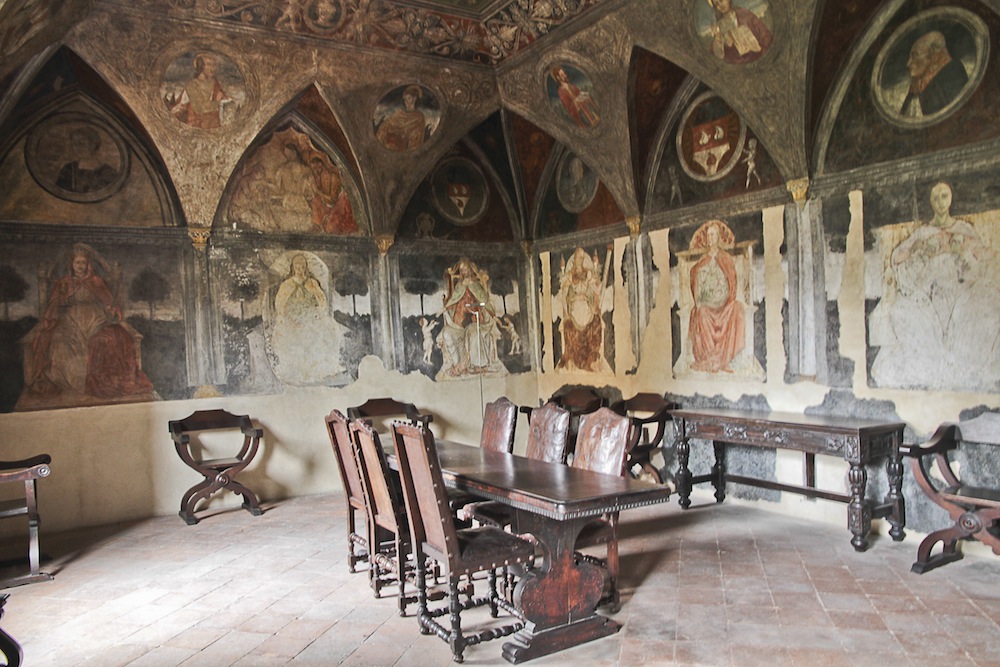