On the occasion of its tenth edition, Contemporary Locus reopens the former powerhouse of Daste and Spalenga, silent site on the urbanised outskirts of Bergamo, with a site-specific project by artist Alfredo Pirri, known internationally for his large scale interventions and for the innovative relationship between painting, sculpture and space.
Innovation and tradition, intimate dimension and public condition, nourish Pirri’s work and his fertile collaborations with musicians, writers, architects, philosophers and film directors. His environmental interventions in museums, theatres, squares, historical buildings, archaeological sites and urban and natural landscapes tend to the construction of a new poetic and political vision of space, departing from a historical, social and cultural reading of the locations.
This practice is reflected in Passi, a series of environmental interventions playing with mirrors that renovate and amplify the perception of reality through the reflection and fragmentation of space.
This sensitivity and research is applied by the artist to the former powerhouse of Daste and Spalenga. Built in Bergamo in 1927 and active for more than 30 years, it is a highly interesting and suggestive space, an impressive example of industrial archaeology connected to the history and transformations of the territory, in a dialogue between invention, labour and energy. 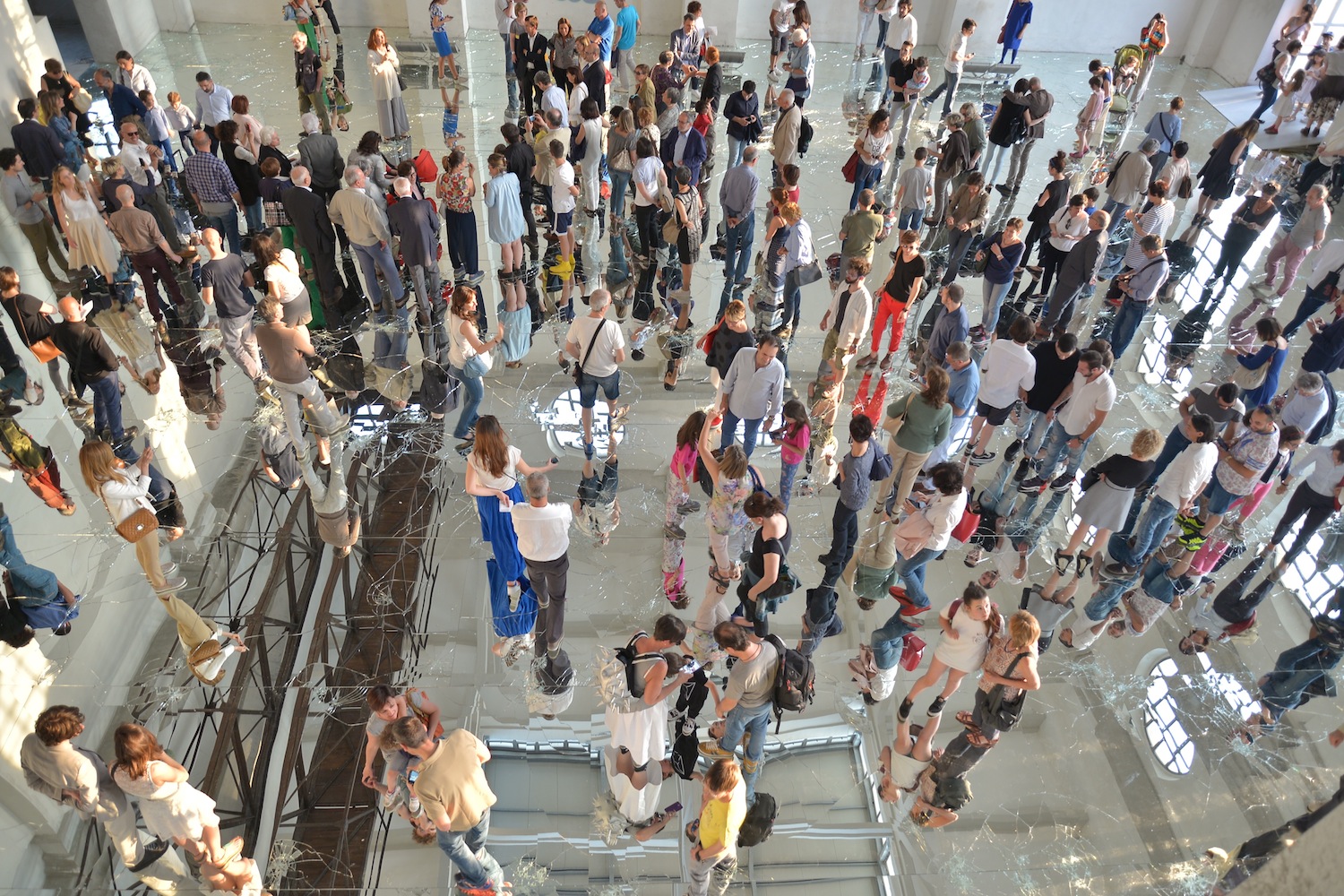 The site-specific project by Alfredo Pirri, conceived for the former powerhouse of Daste and Spalenga, stimulates the memory of this ‘industrial cathedral’, abandoned in the 1960s. Contemporary Locus turns it back on - day and night - thanks to Passi, ongoing project that since 2000 has been installed on several occasions, both permanently and temporarily.
This time Pirri gives new life and energy to the large hall of the powerhouse (over 100 square meters overlooked by an immense bridge crane) thanks to the composition of three actions that integrate the experience of the piece with new technologies, making it a complex experimentation.
The vast floor of the powerhouse is transformed into a lake where the surface of mirrors, cracking under the steps of the visitors, multiplies the perception of reality, giving back a spatiality that is simultaneously dilated and complex, personal and collective.
The daylight that with variable intensity penetrates every day in the powerhouse and is diffused across the tall spaces of the structure, is recorded in real time and given back at nighttime. Every night, the building is transformed into a lantern: every hour, for 12 minutes, a lighting system synthesises and diffuses the light recorded during the day.
An app, available for download at the entrance of the powerhouse (Your Steps), through a system of recording of movements and a special algorithm, makes visible the trajectories of the visitors across the reflective surface: a personal participation to the work ‘in the making’ which, like in a constellation, becomes part of their memory. 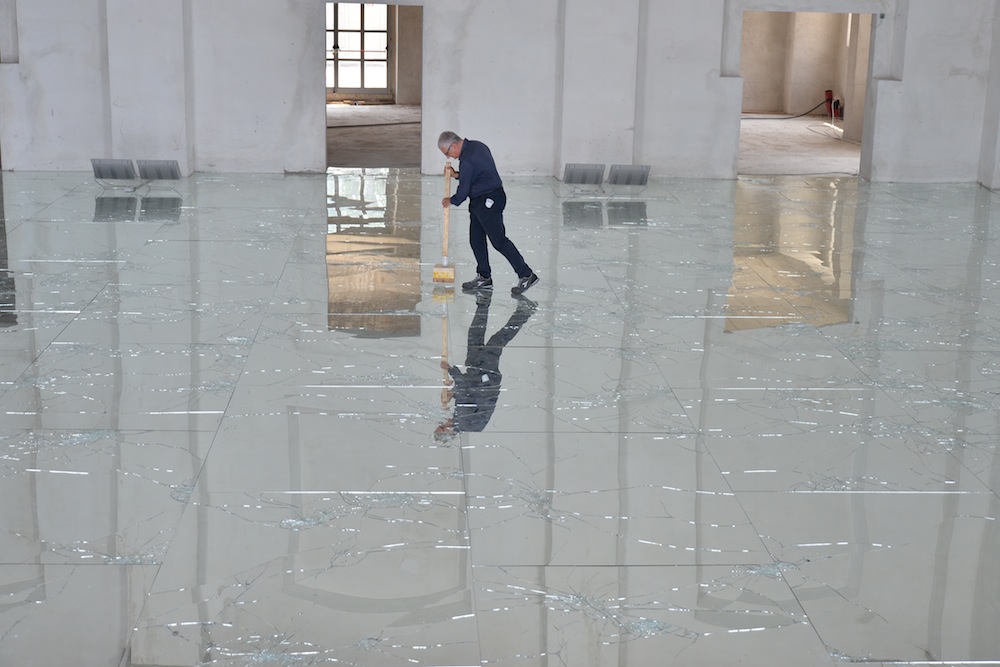 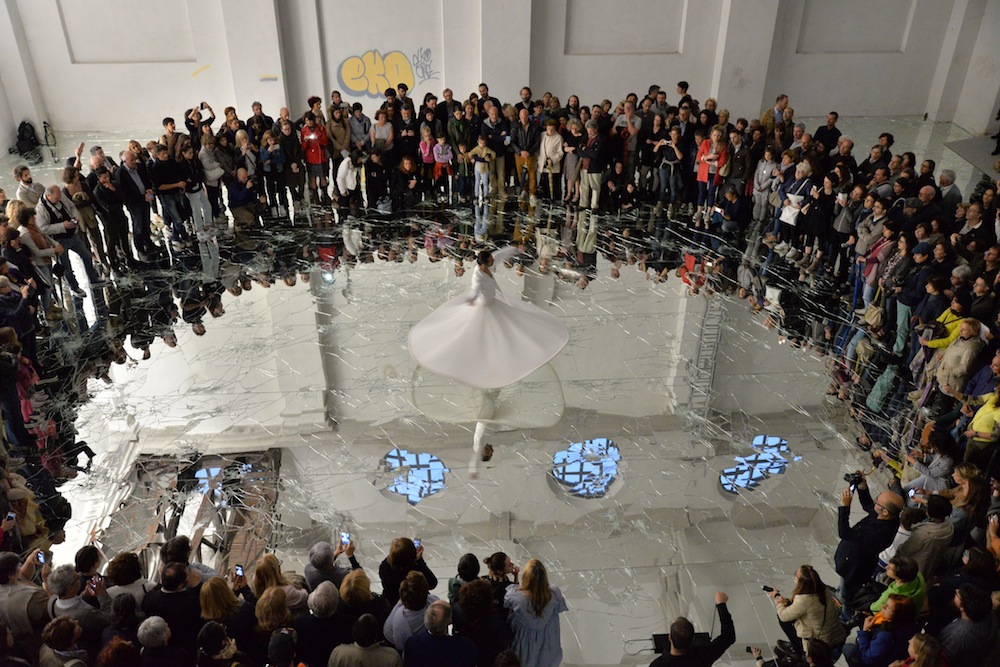 Alfredo Pirri
Alfredo Pirri (Cosenza, 1957), lives and works in Rome.
His work, between painting and sculpture, architecture and installation, gains international recognition in the mid-80s. Color, matter, volume and space are instrumental to his practice which finds, in the relationship with light, the origin of a research which continuously reinvents itself. The work of Alfredo Pirri harmonically confronts architecture and constantly tends to the creation of an archetypal place, a space for dwelling connected to a public function.
Alfredo Pirri has exhibited in several museums and biennials, in Italy and abroad, among which: Museo Novecento, Florence (2015); London Design Festival (2015); National Gallery of Modern Art, Rome with the semi-permanent installation “Passi” (2012-2016); Palazzo Te, Mantova (2013) e Project Biennial D-0 ARK Underground Konjic, Bosnia Herzegovina (2013), where “Passi” is permanently exhibited; National Archaeological Museum Reggio Calabria (2011) with his permanent installation “Piazza”; Visual Arts Centre Pescheria, Pesaro (2007); Maison Européenne de la Photographie, Parigi (2006); Havana Biennial (2001); French Academy in Rome -Villa Medici (2000); MoMa PS1, New York (1999); Korrespondenzen, Walter Gropius Bau, Berlino (1992); Venice Biennial (1988).
His recent collaborations with architects Nicola di Battista (director of Domus) and Efisio Pitfalls (Studio PROAP, Lisbon) were exhibited in 2015 at the British School in Rome.
He has taught at Bezalel Academy of Arts and Design in Jerusalem, at the Sapienza University in Rome, at the Academy of Fine Arts in Urbino, at the Academy of Fine Arts in Palermo. He is currently teaching Painting at the Academy in Frosinone and Visual Arts Advisor at the American Academy in Rome.
In 2015 AMACI (Italian Association for Contemporary Art Museums) selected Alfredo Pirri as guiding artist for the eleventh contemporary art day.
His archive of exhibitions, projects and writings is available online at www.alfredopirri.com.

Former Powerhouse Daste e Spalenga
The former Powerhouse of Daste and Spalenga, built in 1927, fuelled with coal, diesel and eventually methane, used to produce the energy necessary to the functioning of the neighbouring spinning mills. In the 1960s, with the relocation of the textile industry, the entire powerhouse was abandoned and doomed to deterioration. Renovated in 2000, the building was closed again and is currently waiting to be assigned a new function. 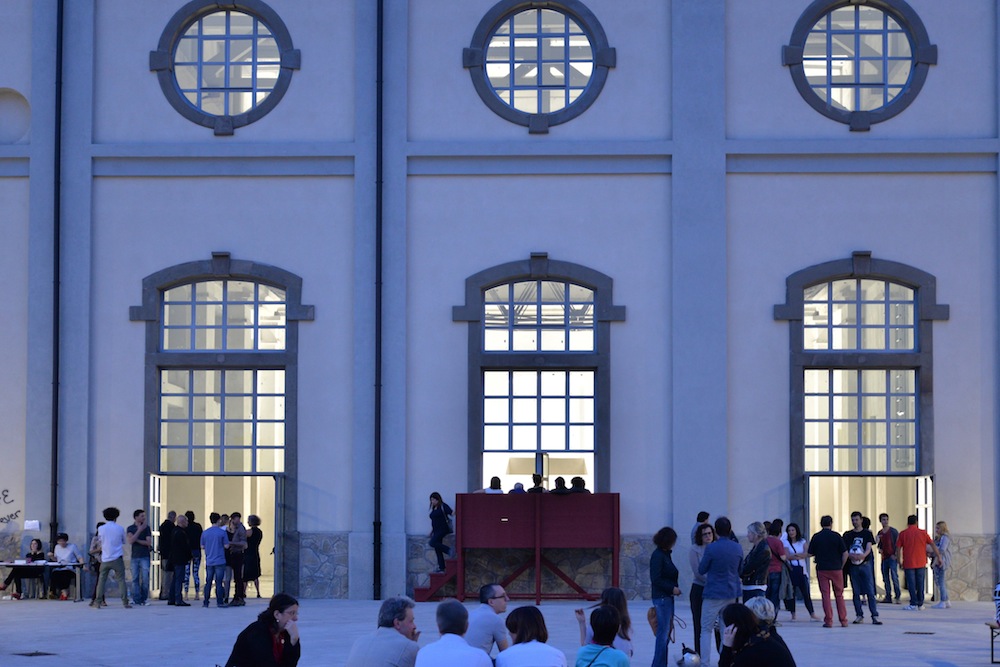 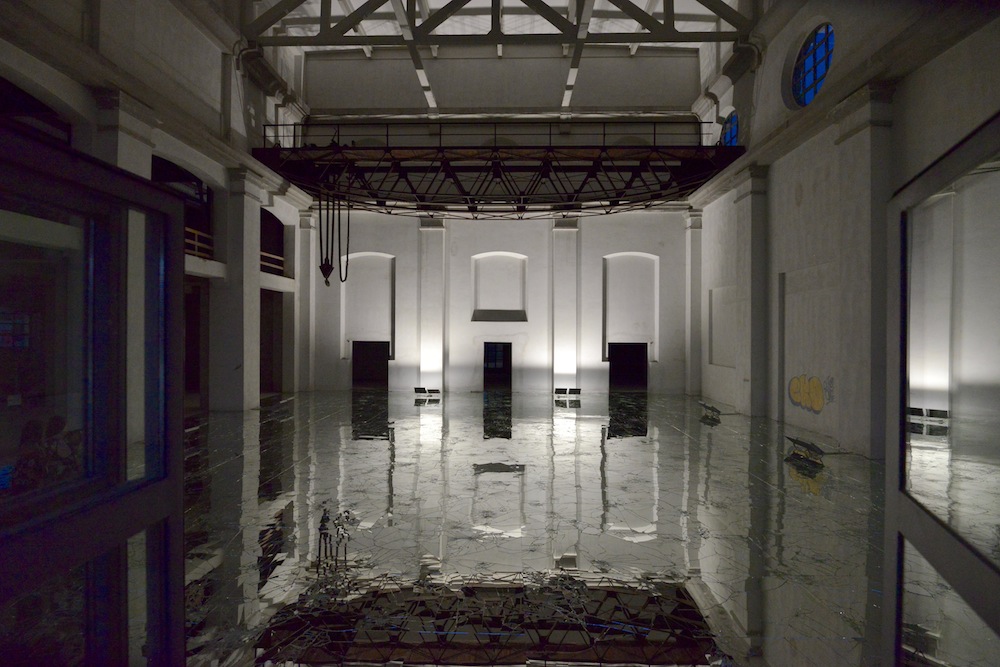 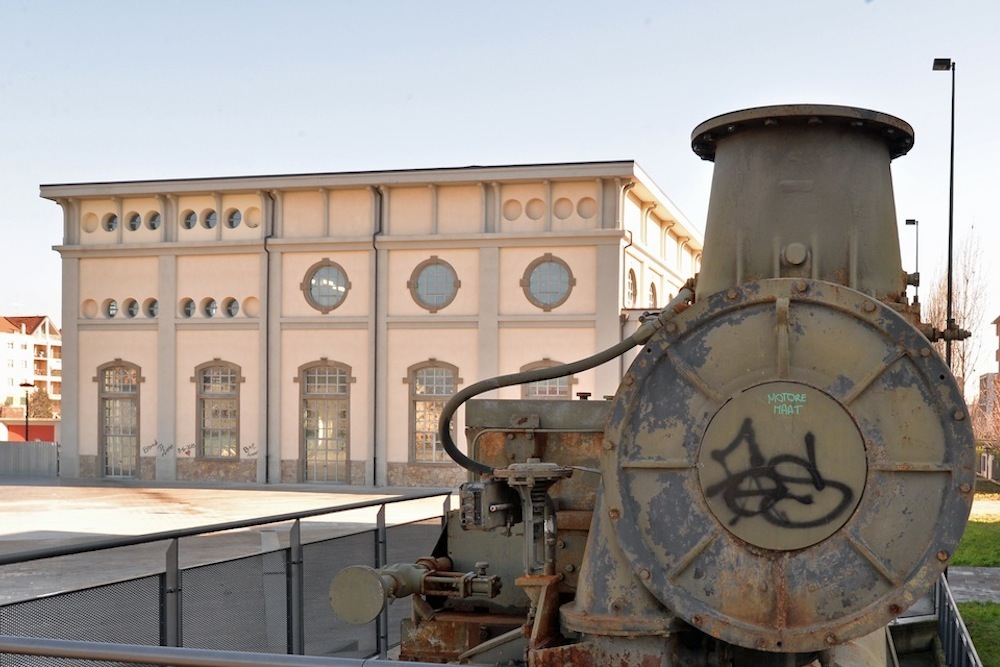 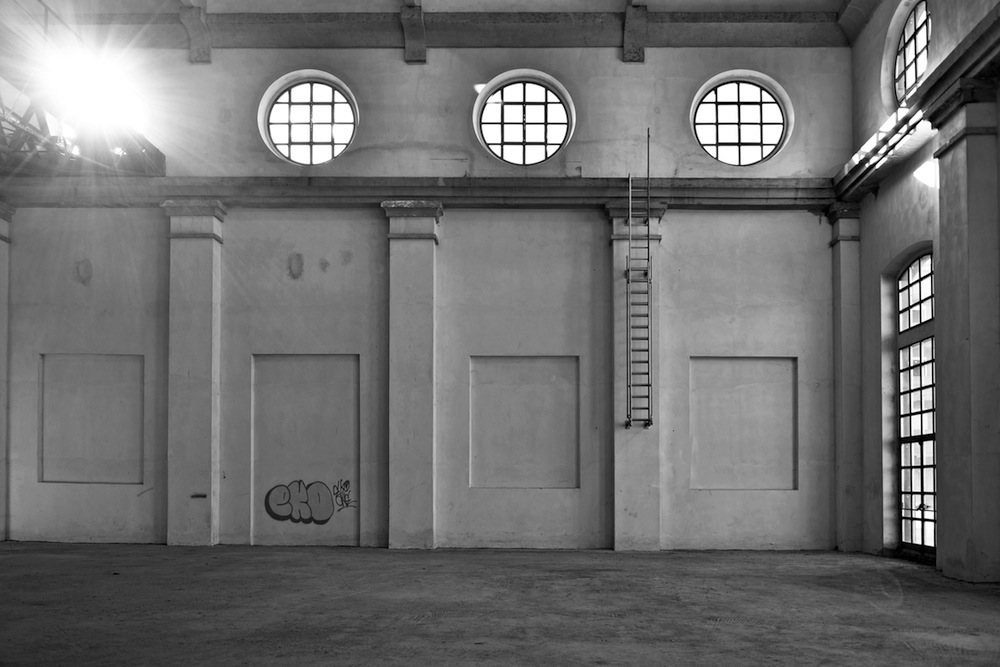