Contemporary Locus 6, curated by Paola Tognon, confirms the nature of the curatorial project based in Bergamo which, through the intervention of contemporary artists, is building an itinerary of discovery of secret or hidden places belonging to the cultural heritage of the city. It is a device for temporary restoration that weaves relations between past and present giving back to the city sites of memory. A small treasure in the upper part of Bergamo, between via Rocca and Piazza Mercato delle Scarpe, it is a place that starting from the XVIth century has participated in many different phases of the history of the city, first as the mercantile court in the Middle Ages and later as a church dedicated to San Rocco.
To reveal and offer a reinterpretation of its atmospheres, rising from a medieval structure into neoclassical architecture, are two artists, the Italian Margherita Moscardini (1981) and English sound artist and composer Jo Thomas (1972). Both have been invited by the association contemporary locus to design and develop a site-specific work for is a space is rich in both history and silences. 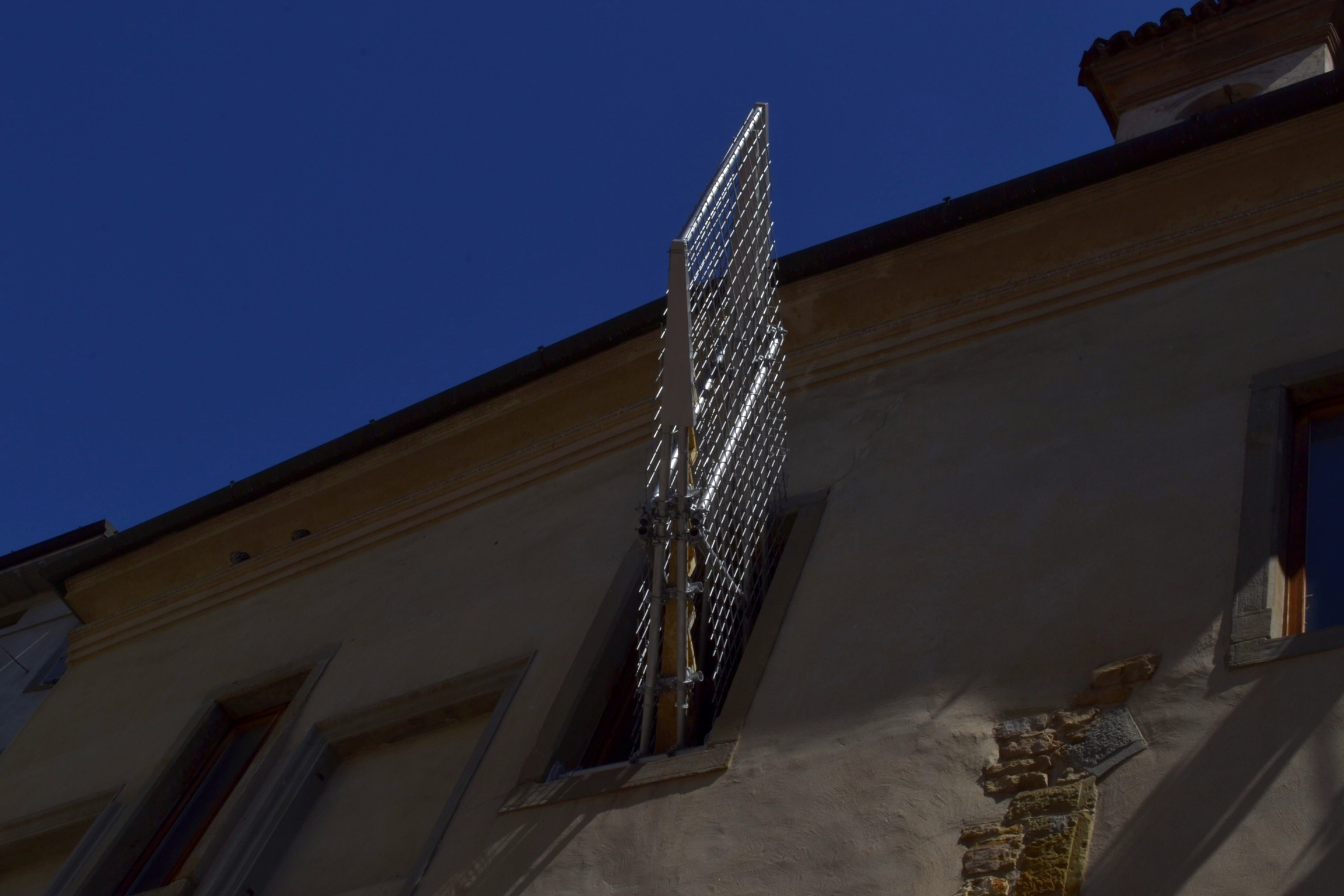 Margherita Moscardini, artist who has carried out various interventions linked to architectures of the past, and who has been developing long-term projects in Italy and abroad, on the occasion is working on the structure of the former church, for which she has designed a temporary intervention that will safely pass through the entire building, making it always accessible and open to the city. The artist intends to reconnect San Rocco that has been closed for decades, to the city, making it a public space, wide and viable like a square.
Jo Thomas, artist and composer, takes part in this project with her sound constellations linked to electronic composition by carrying out a site-specific work that travels and extends throughout the entire space. Long days inside San Rocco have allowed the artist to build a track that elaborates an innovative relationship between the space, its history and past functions.
In a game of references, the composition takes into account the light that penetrates the space and highlights its materials, elusiveness, the condition of degradation and simultaneously illuminating the paths of sound dilated in time of its long history.
The exhibition and the exploration of the site are accompanied by the contemporary locus 6 free app for Iphone and Ipad, developed by Elisa Bernardoni, with both Italian and English texts and images to expand on the works, artists and history of the location. 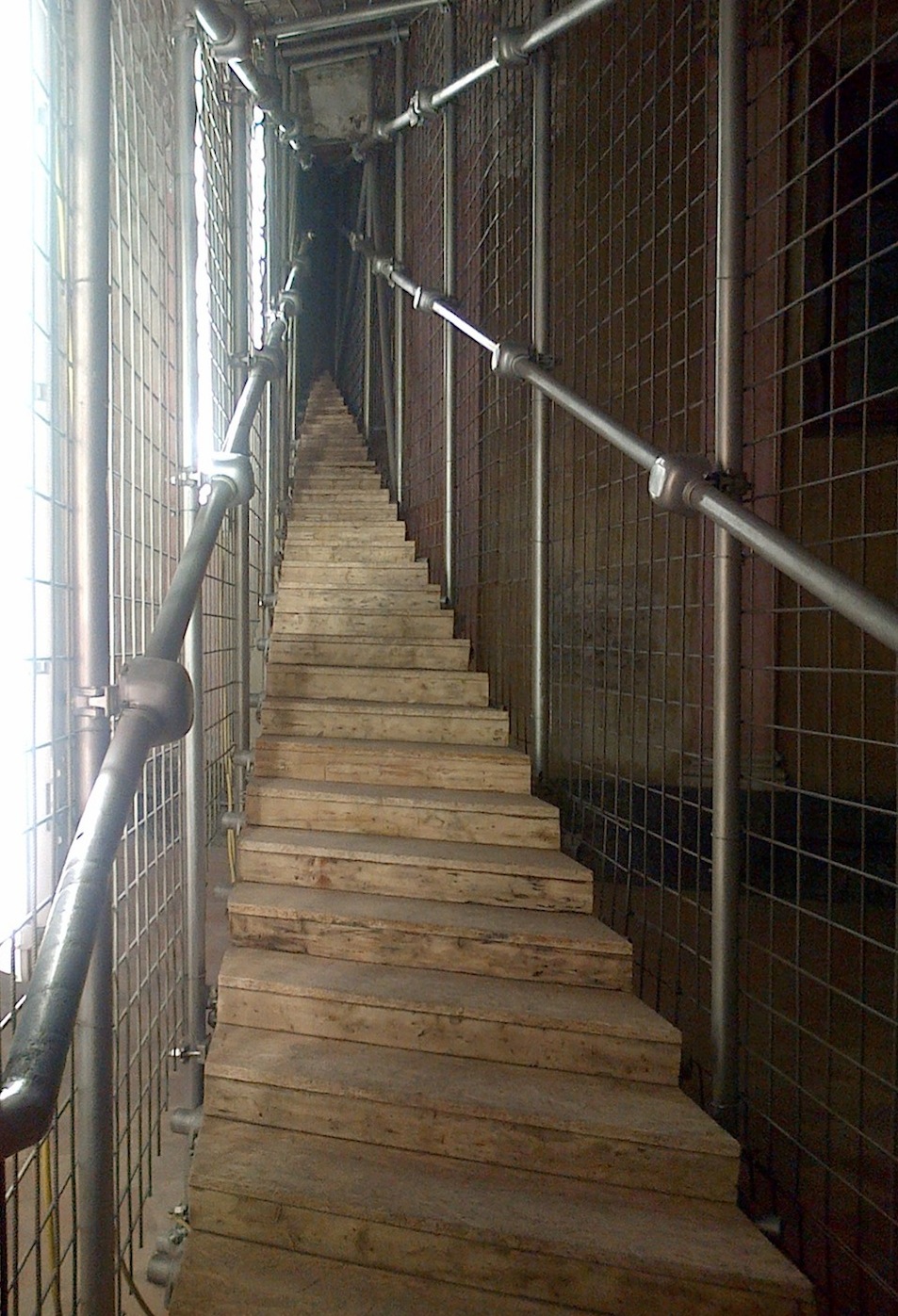 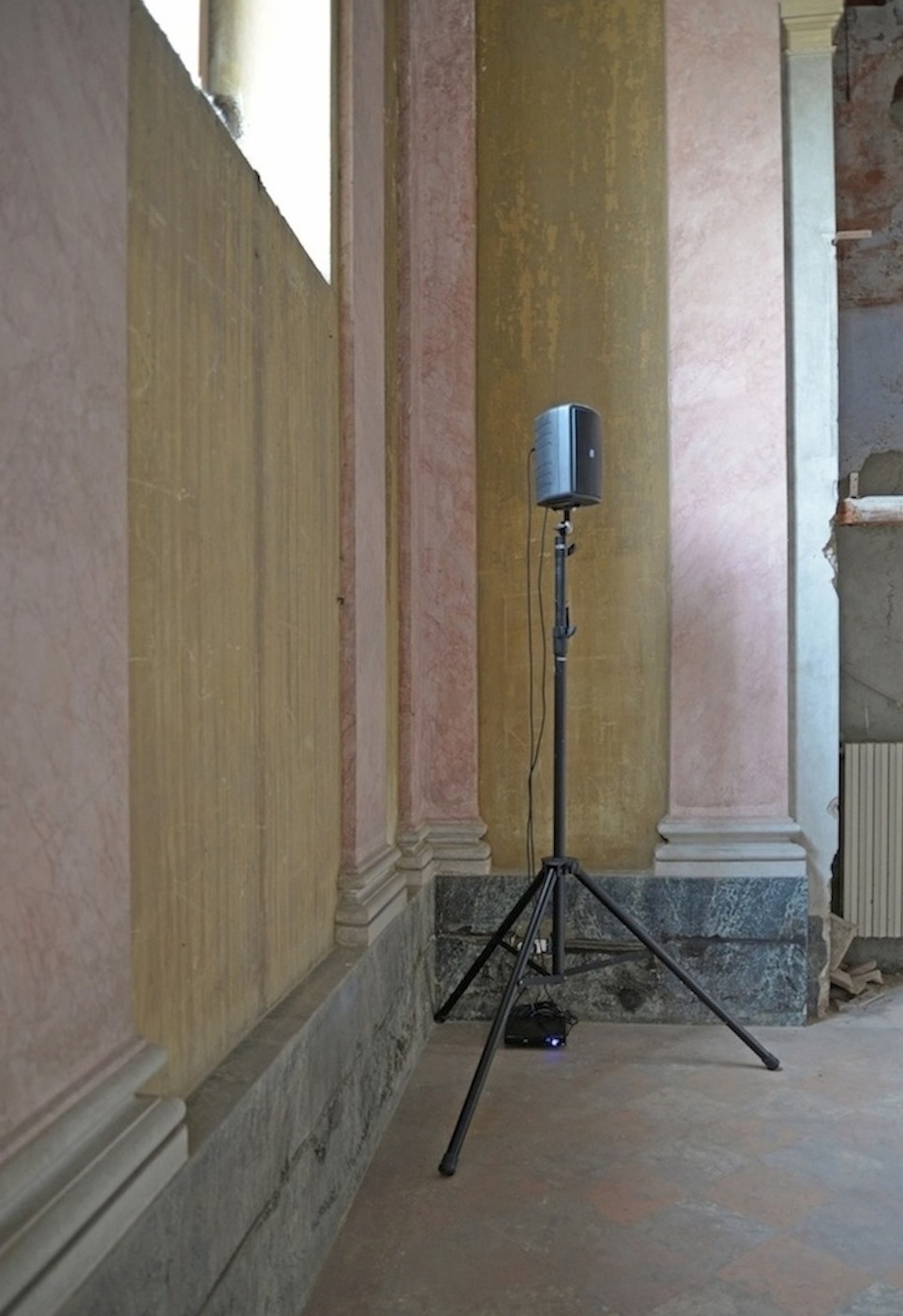 Margherita MoscardiniBorn in 1981 in Donoratico (Livorno), where she lives and works.
After her studies of Cultural Anthropology, she attends the XIV Corso Superiore di Arti Visive (Visual Arts course) of the Antonio Ratti Foundation of Como with Yona Friedman (2008) and one with Peter Friedl of the Spinola Banna per l’Arte Foundation, Poirino, Turin (2009). In the last few years she has been a long-term guest at the Center for Contemporary Art of Andratx (CCA Foundation), Mallorca, Spain (2010), the Center for Contemporary Art ArtToday, Plovdiv, Bulgaria (2011), Citè Internationale des Arts, Paris, France (2012) and the Pastificio Cerere Foundation, Rome, Italy (2012-2013).
Her work has been presented in both personal and group exhibitions in Italy and abroad including SongEun ArtSpace, Seoul, Korea, the Italian Institute of Culture Istanbul, Turkey, the Museum MACRO of Rome, Italy, ArtToday Center for Contemporary Art, Plovdiv, Bulgaria, La Quadriennale Foundation, Rome, Italy, Schauwerk, Stuttgart and Staedtgalerie Kiel, Germany, Palazzo Reale, Milan, Italy, Palazzo Strozzi Foundation, Florence, Italy.
She will shortly carry out a permanent public work in the city of Bergamo, commissioned by the Council of Bergamo and GAMeC, Modern and Contemporary art gallery in Bergamo, Italy.

Jo Thomas
Born in 1972, she lives and works in London.
In 2012, with her work Crystal Sounds of a Synchrotron, she wins the Golden Nica dell’Ars Electronica Digital Music Prix. She has carried out performances alongside many artists including Charles Hayward, Lee Gamble and Phil Nimblock SquarePusher. Her universal sounds are based primarily on her voice.
Her most recent work, Mermaids (Holidays Records) acclaimed international fame with FACT10 best of 2013. The LP E82 Alpha was nominated for the Quartz 7 Award (2011). Her first two albums Alpha (E82) and Nature of Habit (E142) were released with the British label Entr’acte.

Ex Chiesa di San Rocco
Dedicated to the Madonna during the plague that hit the city in 1513, the original chapel was built above a XIVth century fountain, in the place of a pre-existent and important building used as the Court of Merchants.
Renovated at the end of the XVIth century and dedicated to San Rocco, the former church was subject to another important modification in the XVIIth century and another last substantial reconstruction of its interior during the 1800s. The current building, which also has a small belfry of square plan and with four arched openings, comes from the modification made in 1630, the year in which Bergamo was once again contaminated by the plague. In 1697 the church was deconsecrated and in 1797 was reopened again by the Salvioni family, a noble Bergamasco family. It was probably due to the fall from grace of the family that San Rocco was once again abandoned and neglected, and in 1927 eventually deconsecrated. A last and limited intervention of restoration dates back to 1984. San Rocco is currently property of the council. Among the artistic heritage of the church is the painting by Pietro Ronzelli from 1588 (La Vergine addolorata e i Santi Rocco e Sebastiano) which is currently held in the Cathedral. The frescos that date back to 1856 are no longer identifiable and are by Giacomo Gritti while behind the right wall in respect to the entrance the remains of an organ are still visible but which is, along with the relics, untraceable. Outside the building of San Rocco, still in its original place, is an old wooden kiosk that houses a remarkable fresco of a Madonna with child surrounded by angels dating back to 1520 most likely from a painter of the circle of Bembo. 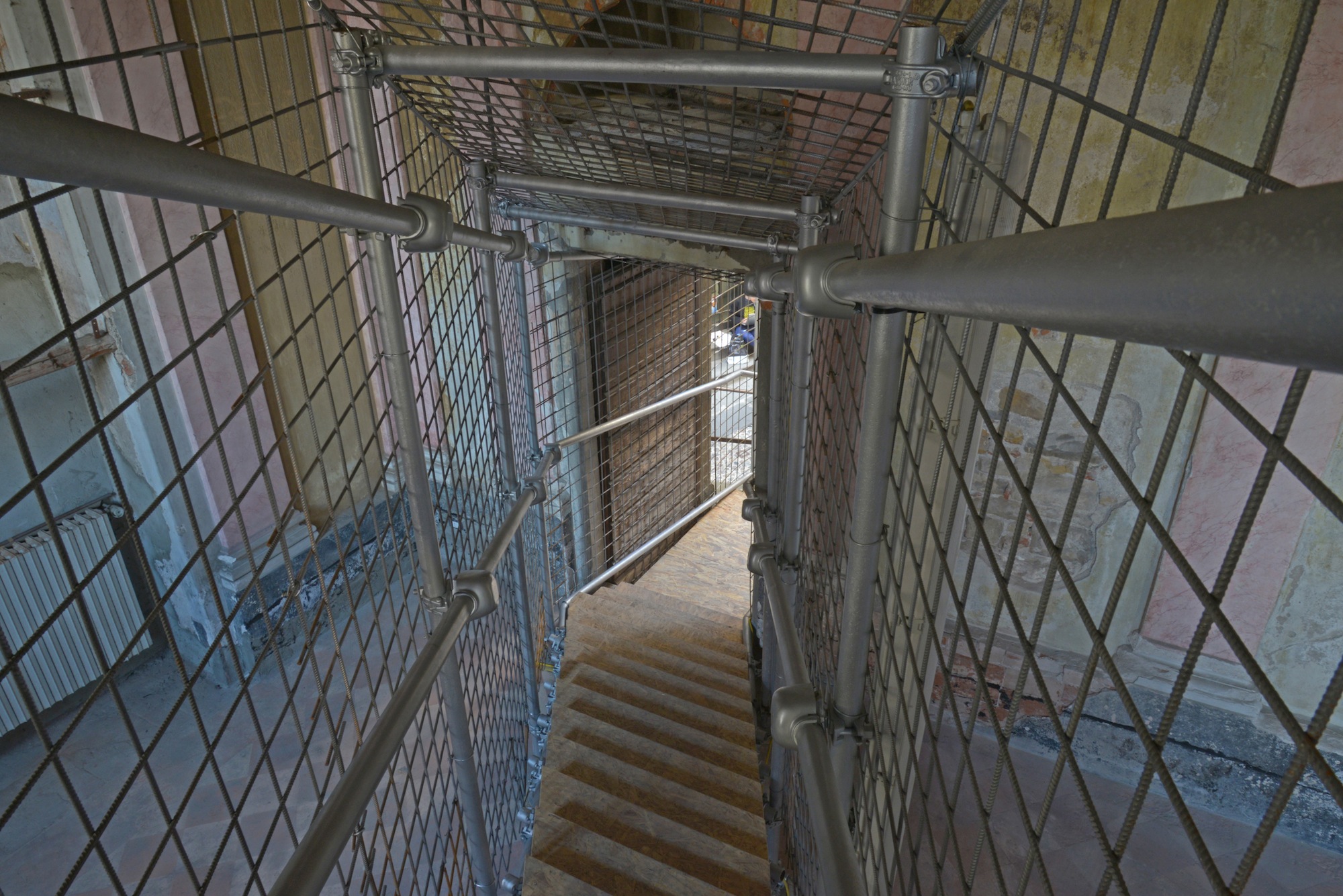 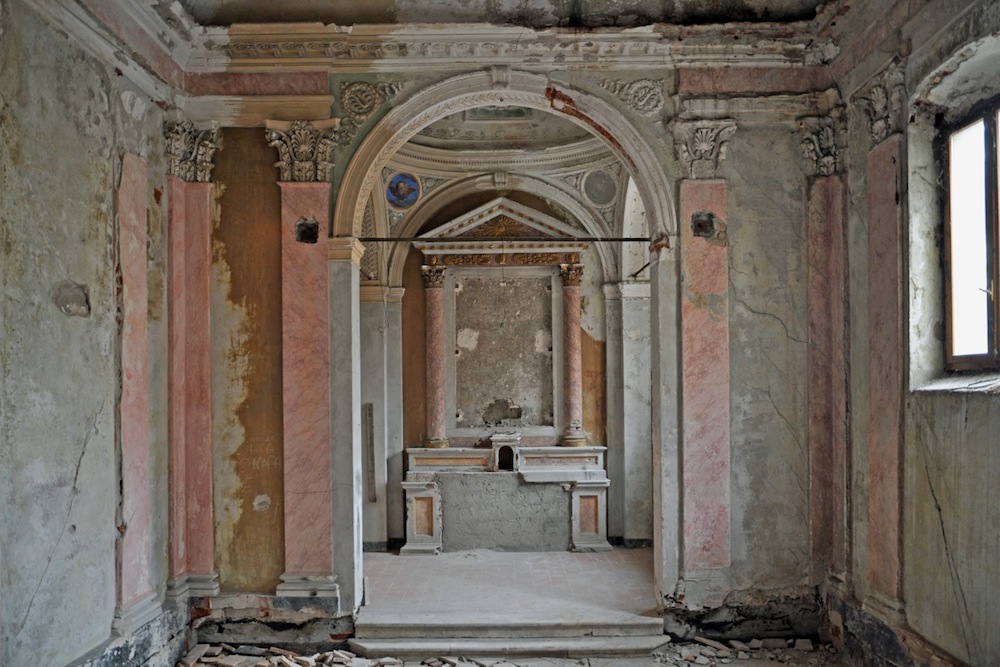 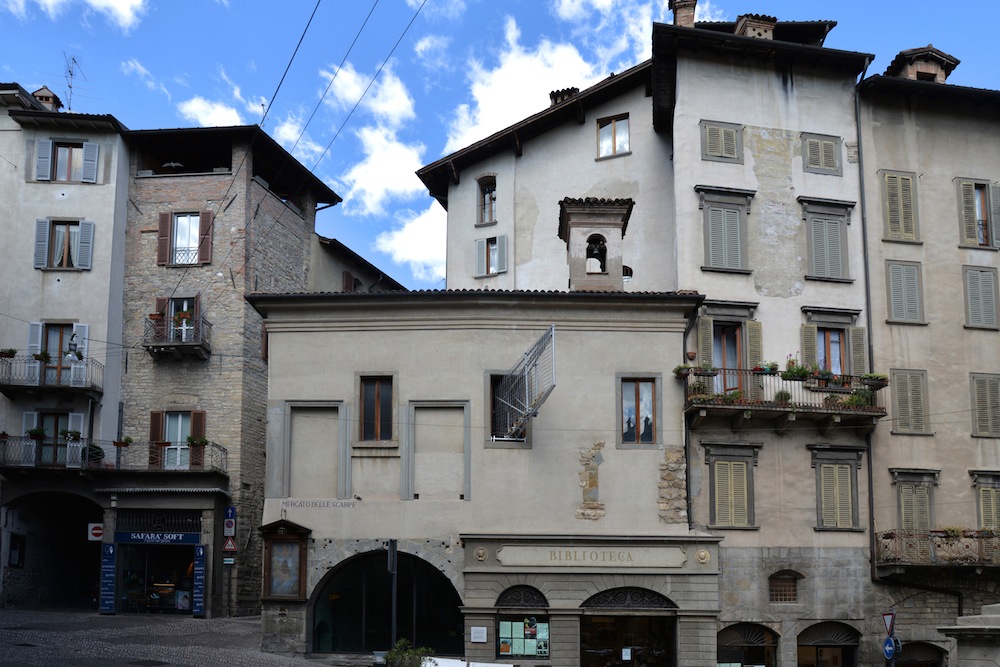