On the occasion of contemporary locus 2, curated by Paola Tognon, artists  Anna Franceschini (1979) and Steve Piccolo (1954) confronted themselves with the spaces of the Cannoniera di San Giacomo, located in the medieval Upper Town, underneath the homonym marble door. Once again contemporary locus encourages artists to find echoes and correspondences with the history and contemporary condition of a abandoned site in the city.
Anna Franceschini and Steve Piccolo have been invited to operate inside the Cannoniera of San Giacomo to propose an unveiling dimension through which the distinct perception of the visitor which delved into the dark and secret space of the Cannoniera with torches and then with the possibility of becoming itself sharer to the revealing of the project.
Visual artist and filmmaker, Anna Franceschini proposes for the Cannoniera of San Giacomo two video works, Fragment (2012) e To know a thing you must call it by its name (2012), that invade the thresholds of the internal space dilating its perception with effects of depth and disorientation. Dust and blocks of marble, stars and stones have been the instruments of a minimal vision that has led to free narrations of the space and the imagination. 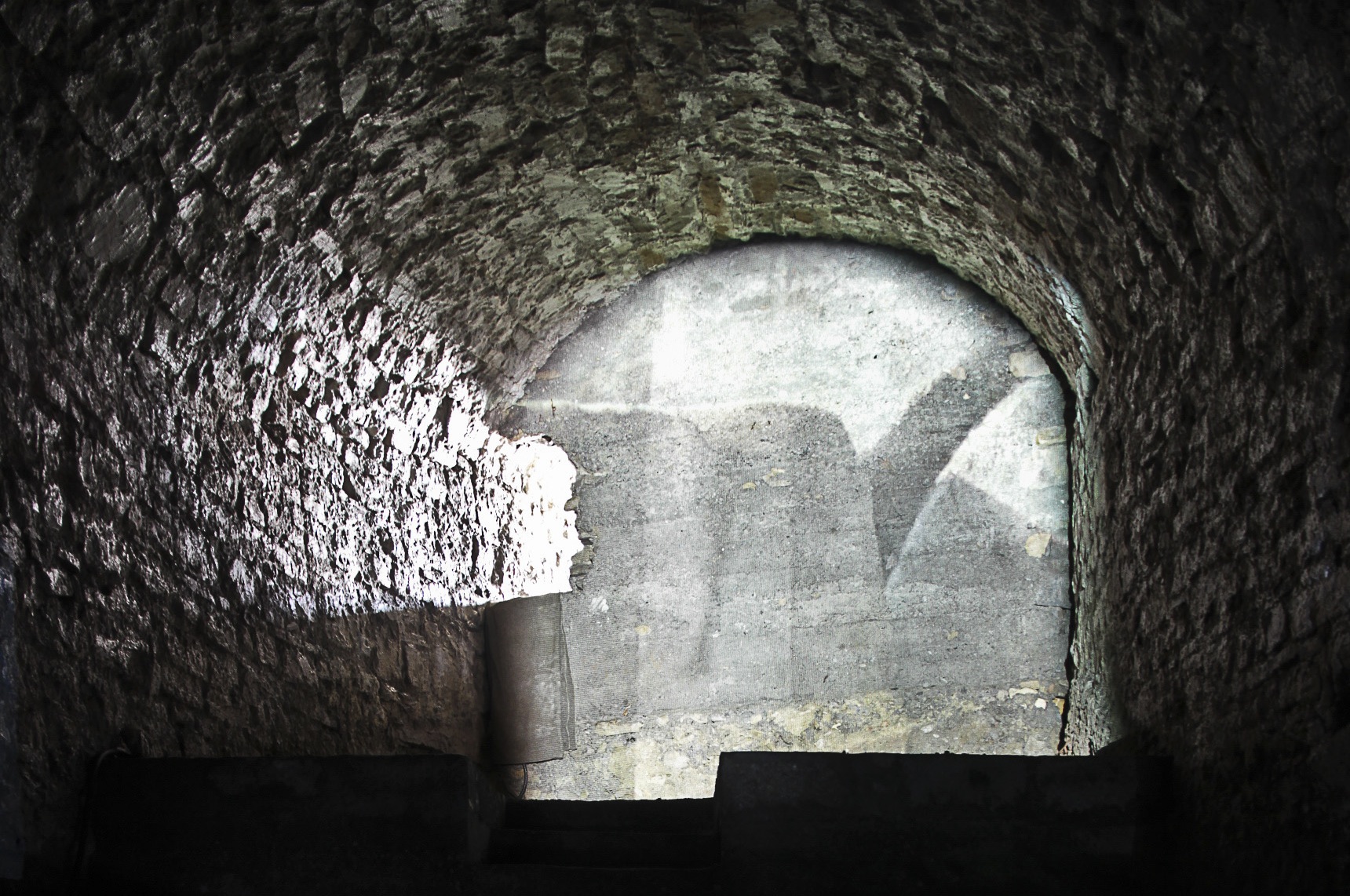 Steve Piccolo, italo-american multidisciplinary artist, constructs a path in three phases, activated directly by the visitors, who become authors and discoverers in their own right. Starting from a story, Michael’s Fire (2012), edited for contemporary locus 2 by the collective Temporary Black Space and available for reading in the meadow outside the Cannoniera, memories and dreams of childhood become the clues of a path of initiation, in which every visitor was both author and actor.
The presence of Franceschini and Piccolo for contemporary locus 2 builds a path in the dark and secret space of an ancient and powerful place. A place whose entrance is hidden, as in the most ancient legends, on a large grassy and wooded rampart that lets control the city below. Inside, with sounds and moving images, installations of arise objects and backlit images stolen from everyday life, the exhibition presents itself to the visitor as visionary experience and involvement that allows a fluidity of senses and visions.
The exhibition and the exploration of the site are accompanied by the contemporary locus 2 free app for Iphone and Ipad, developed by Elisa Bernardoni, with both Italian and English texts and images to expand on the works, artists and history of the location. 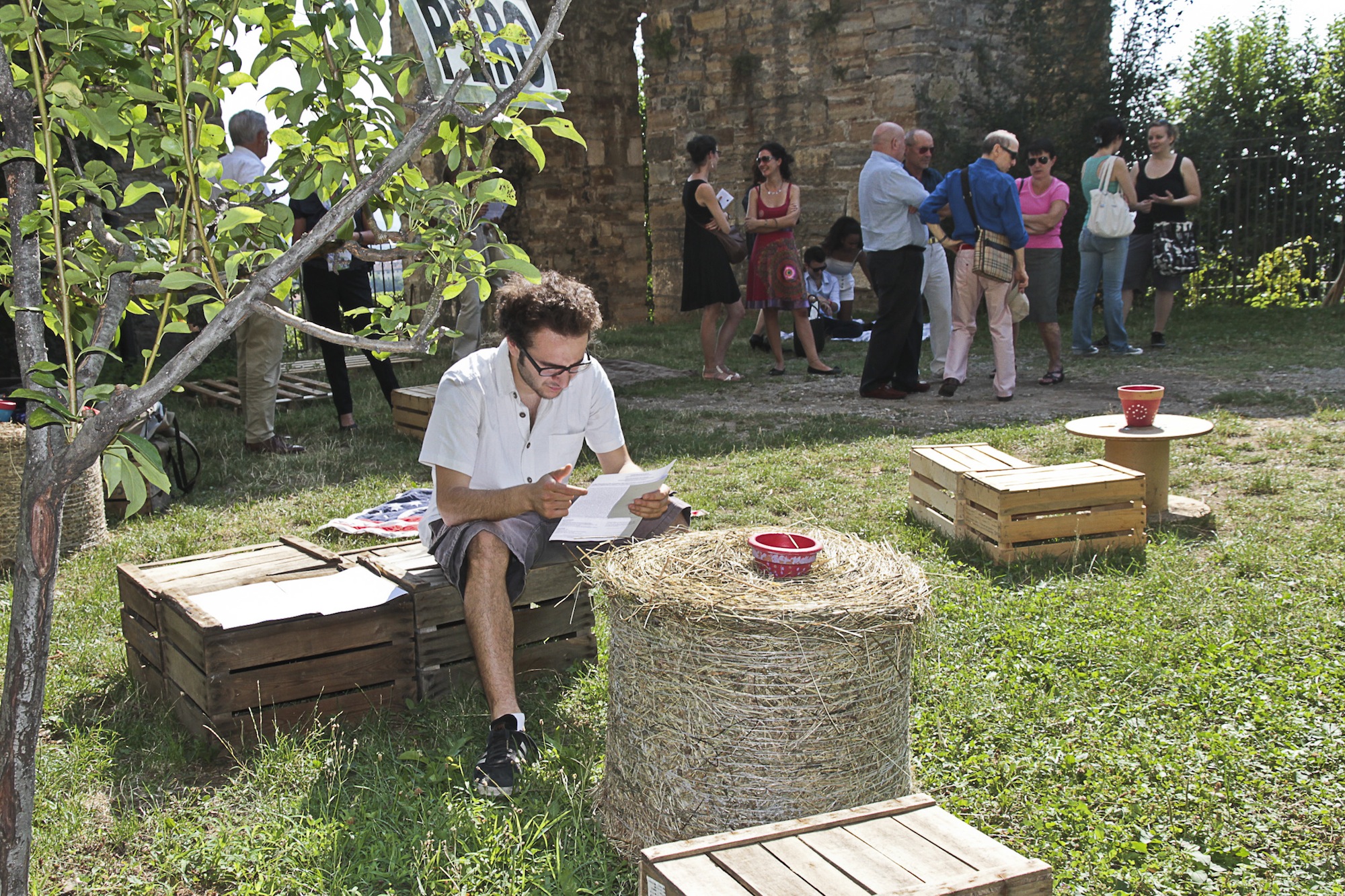 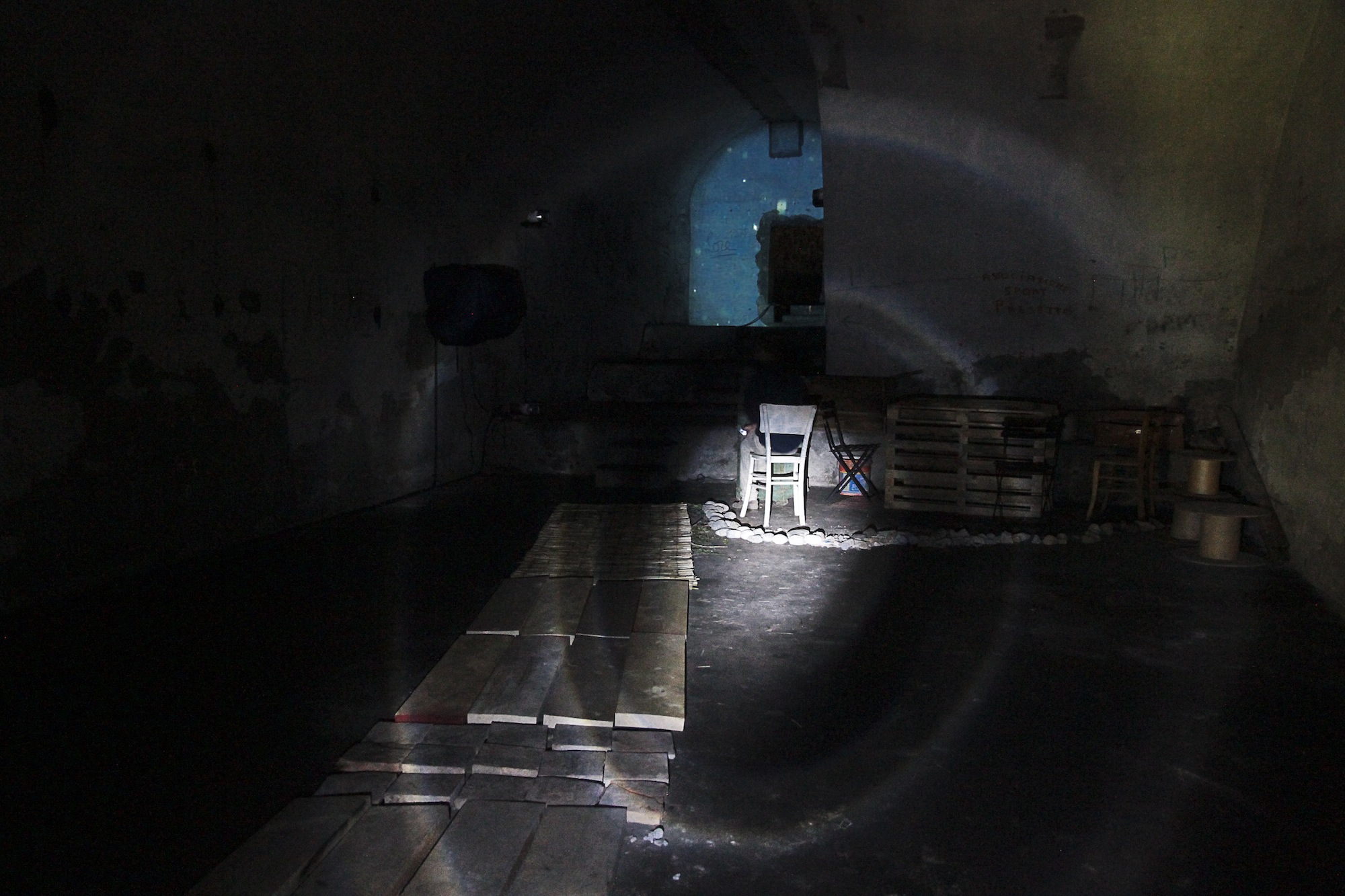 Anna Franceschini
Born in 1979 in Pavia, she lives and works between Bruxelles and Milan.
The starting point of the works of Anna Franceschini is the observation and exploration of reality through language audio-visual.
Visual artist and filmmaker, educated in Italy but active in European geography, is unique for the rigor of her research which, through film and video, she is capable of transforming them into narratives that can be distinguished by their authorship and style. Her video works, which can be defined as abstract for the near total absence of the human figure, are characterised by the fabrication of spaces and places that become long narrative moments open to interpretations and suggestions. Works like stories by images that follow one another without a sound, or with the simple sound of filmed actions, and that often contrast with the darkness of the shootings to the light that you see inside a conceptual reversal of our normal visual habits.

Steve Piccolo
Born in 1954 in New Hampshire (USA), he lives and works in Milan.
Steve Piccolo begins his career in 1970 by playing bass, singing in jazz groups and creating sound works and performances in the art spaces of New York. In 1978 he starts the Lounge Lizards with the Lurie brothers, a project that continued for about five years. Since then his work as a musician, composer, artist, curator and lecturer has increasingly become richer. In 2008 Piccolo is the sound curator for ArtVerona and for the Club 21 during Frieze Art Fair 2010 in London. In 2008 he is also curator of Chinatown Temporary Art Museum project that participates in Undo.Net’s InContemporanea in Milan. His collaborations with video art, sound performances and installations have allowed him to work with Adrian Paci, Luca Pancrazzi (including sound art of the group DE-ABC with Gak Sato), Giancarlo Norese, Alessandro Mendini, Nathalie Du Pasquier, Gabriele Di Matteo, Francesco Fei, Marc Vincent Kalinka, Marcia Migliora, Marcella Vanzo and many others. Amongst his public art projects, Storyville is a series of 11 sound installations done for the city of Bergamo and L’Italia per le festività natalizie 2008-2009 (with Gak Sato). He teaches sound art courses at the Accademia Carrara in Bergamo (since 2002) and at NABA in Milan (since 2005), he writes a monthly column for the magazine InSound and edits the sound art pages on the web site Undo.Net. For many years he actively worked with the project Isola Art Center in Milan and is currently working with the magazine-project E Il Topo. 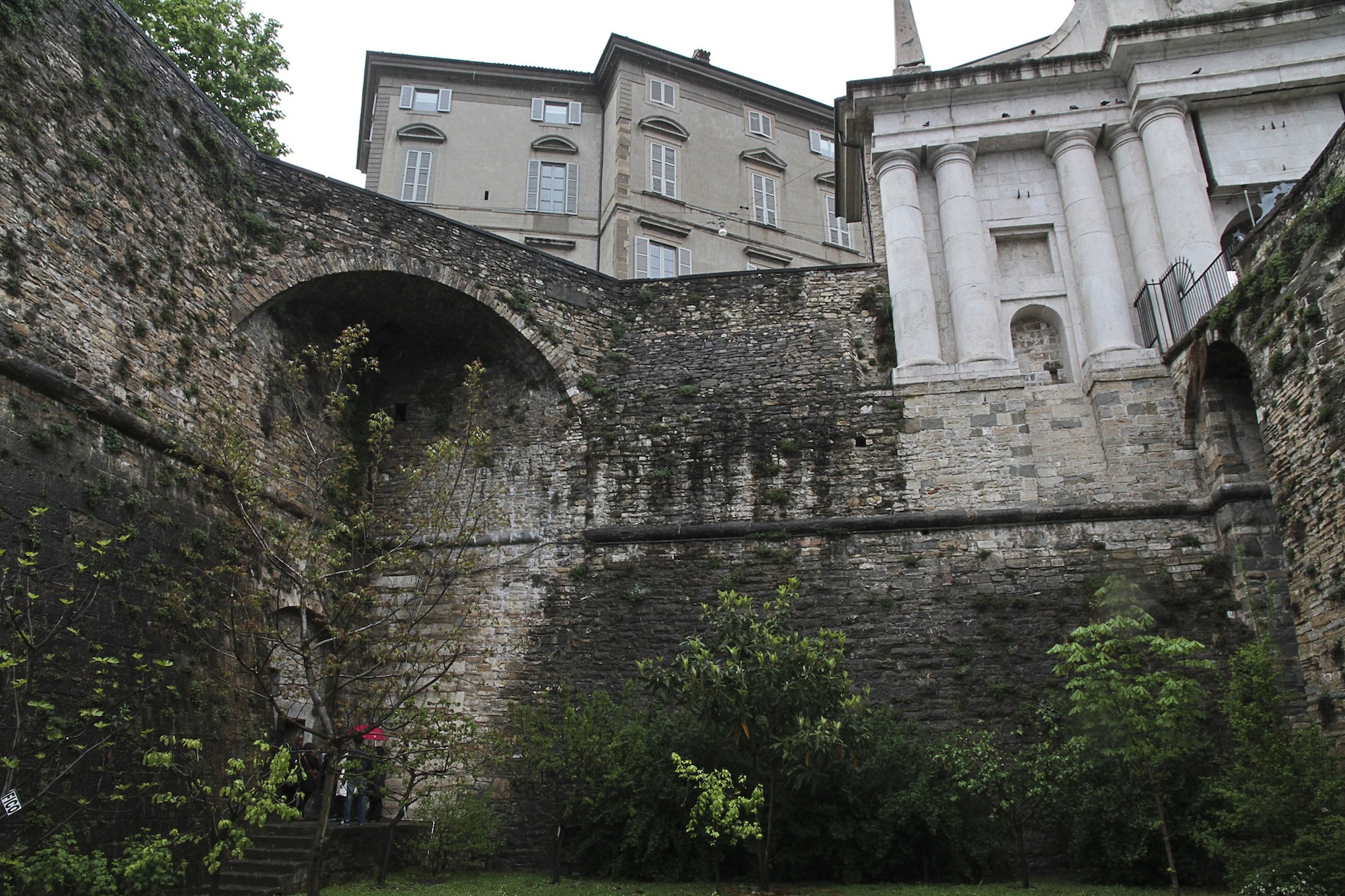 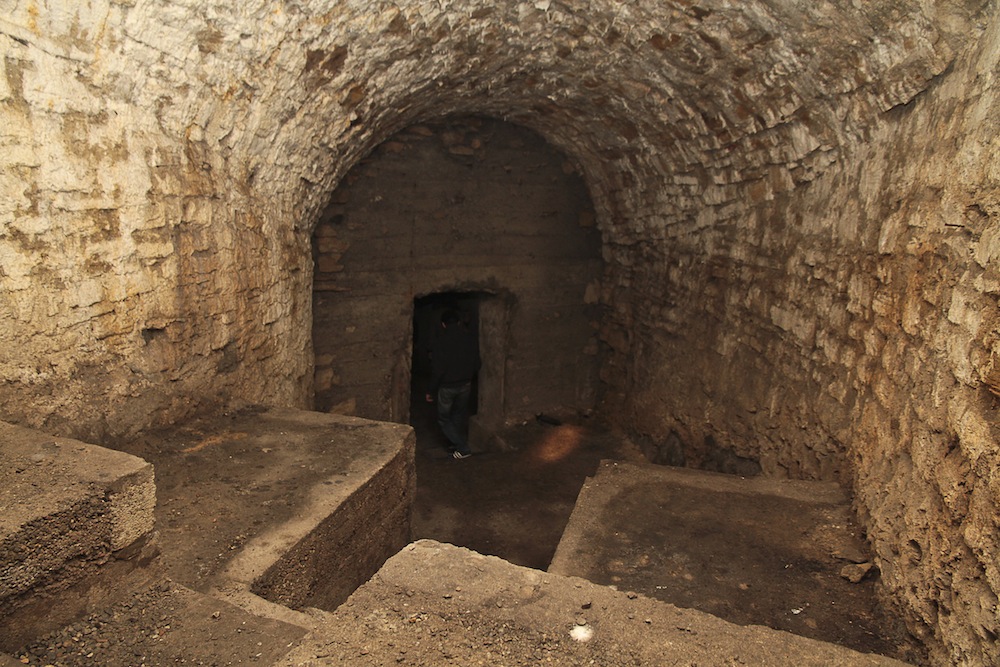 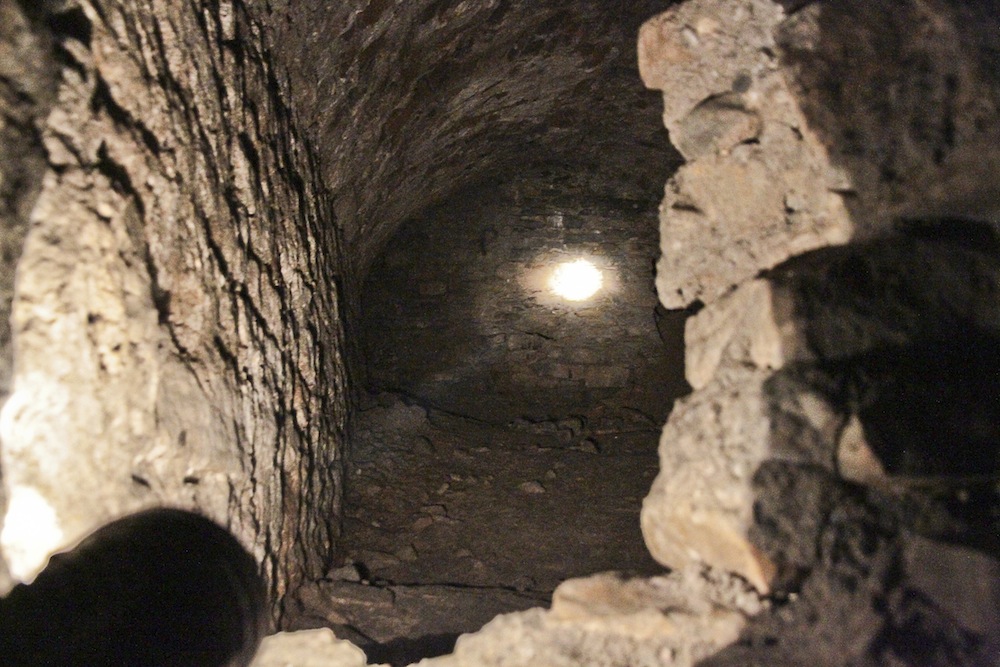