contemporary locus 4 invites Grazia Toderi (1963), an internationally renowned Italian artist, to continue the itinerary of interpretation of the urban fabric through contemporary art, aimed at suggesting a new relationship the place and at renewing the passion and the amazement for such an historical and distinctive space.
On the occasion of the fourth exhibition curated by Paola Tognon, Grazia Toderi faces the space of the Teatro Sociale, one of the most significant places in Bergamo, and gives life, with a video installation, to a simultaneous fruition of the space before and after its restoration.
Contemporaneity takes form inside the theatre through a video installation projecting on the back the stage, Sound (2002), the piece Grazia Toderi made inside the Teatro Sociale before its restoration, part of a series of works the artist carried out in the most relevant Italian theatres. Known for her will to revitalise spaces, the artist wanted to highlight the condition between beauty, memory and neglect, between the past and the future of the Teatro Sociale before its renovation. 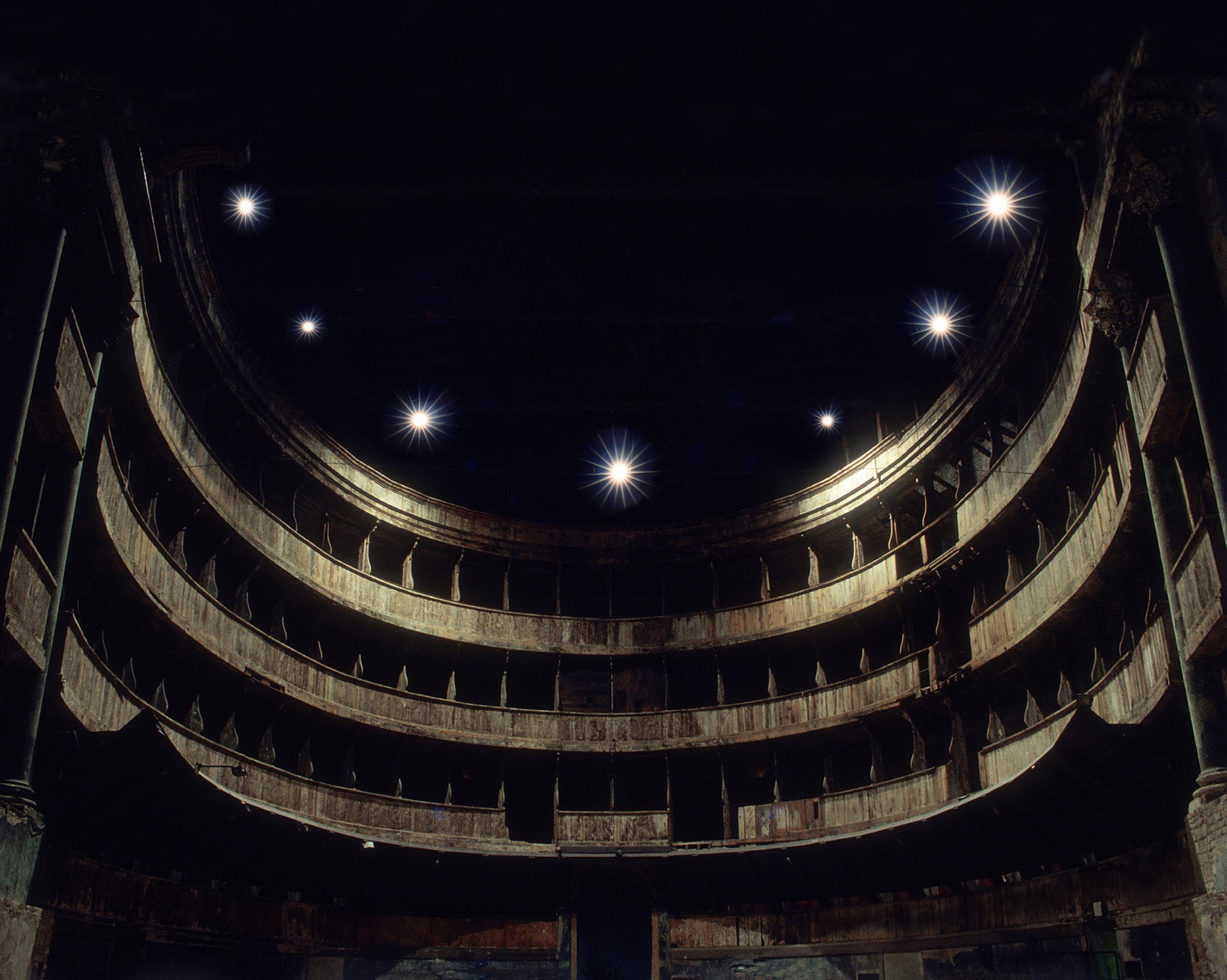 The collocation of the piece inside the theatre itself, more than ten years after its making, is designed to offer a coincident vision of the same space before and after the works, achieving a suggestive effect and a great narrative tension. An exhibition project in reverse, where contemporary art interprets the past history of the theatre proposing to the audience the chance to merge past and present in one single vision.
Grazia Toderi stands out for her concision and originality stemming from a research which, through immersive installations, results in a dilated and dreamlike dimension of the space. It is a space which contains and transforms the perception of the audience, subject involved in a timeless condition where observation and reflection find an innovative receptive dimension.
The exhibition and the exploration of the site are accompanied by the contemporary locus 4 free app for Iphone and Ipad, developed by Elisa Bernardoni, with both Italian and English texts and images to expand on the works, artists and history of the location. 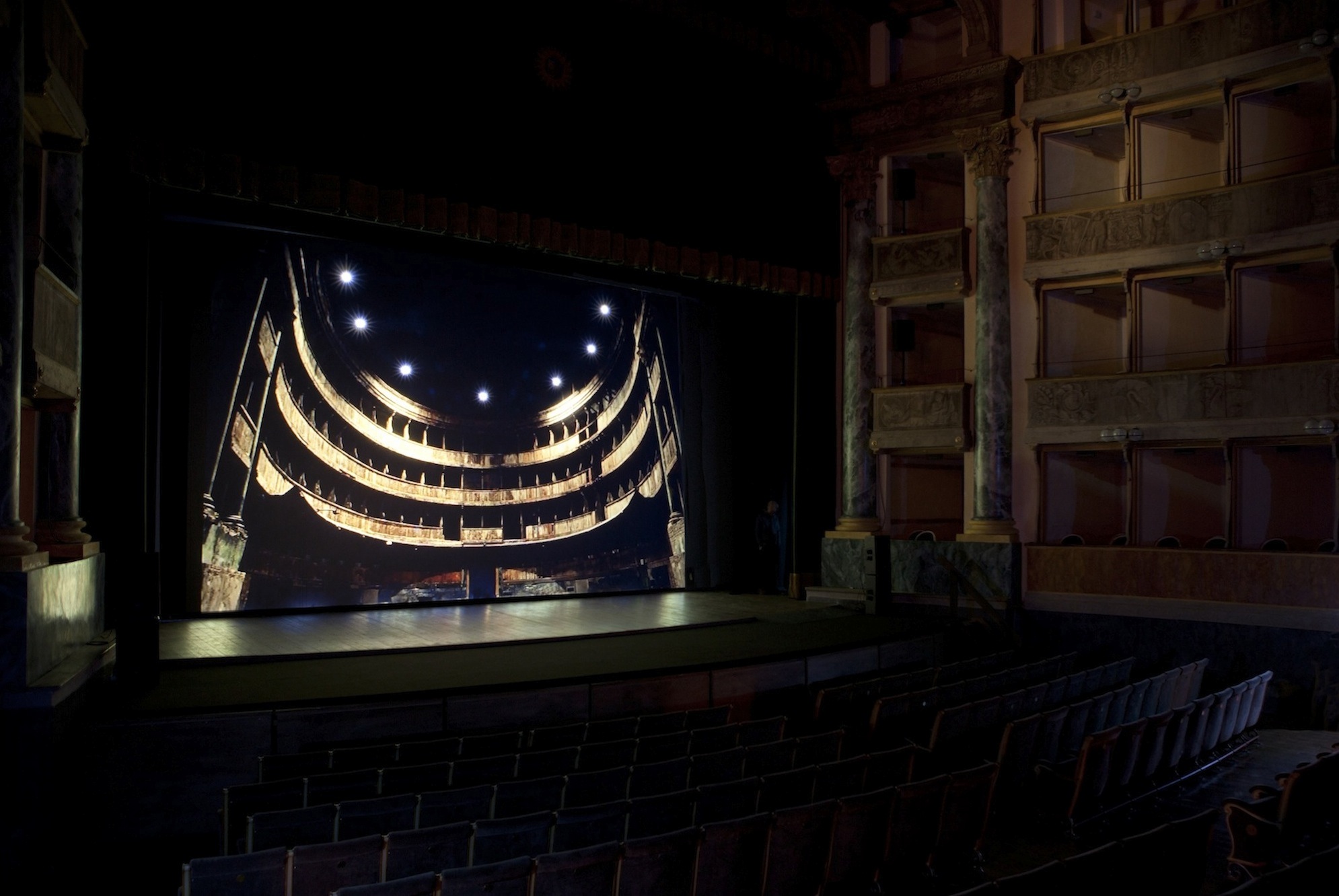 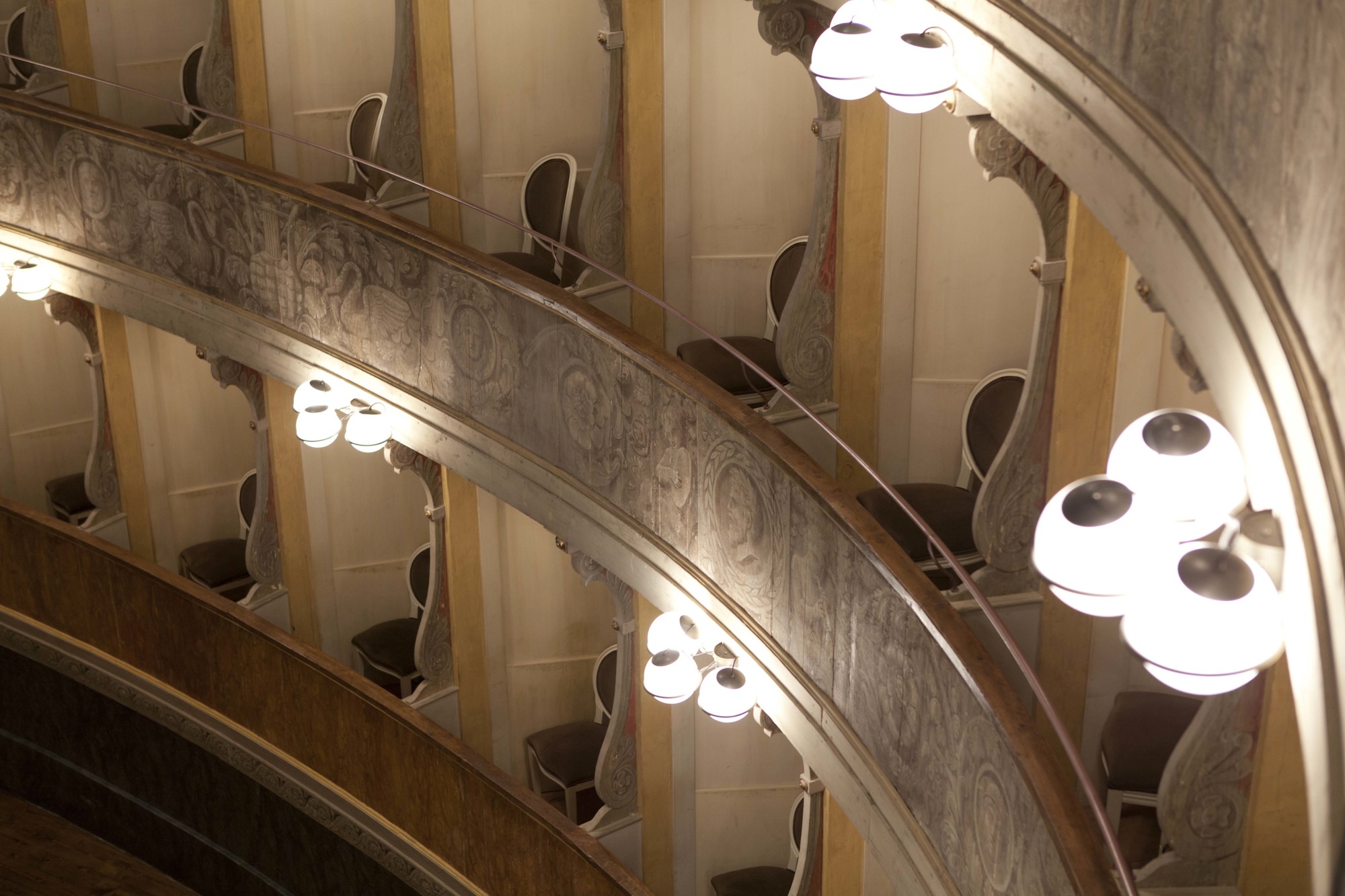 Grazia Toderi
Born in 1963 in Padua, she lives and works between Milan and Turin.
The starting point of Grazia Toderi’s visual research is the unconcerned registration of simple actions we often perform in our daily and personal sphere, next to the intentionally elementary use of the video as expressive media. This is the type of work she brings to Aperto ’93 in the forty-sixth Venice Biennale. The following works instead gather the feeling of a whole generation, the one who grew up with television, a communication channel of which the artist interprets the unifying feature and symbolic value, as in Nata nel ’63 and Prove per la luna (1996), which speaks of the emotion of the first moon landing seen with the eyes of millions of people who watched the TV screens. In a thematic and visual pursuit and fascinated by the use of already existing images and by the processes of entertainment, as an occasion of exchange and unification, Toderi works on images of stadiums, arenas and especially of great historical theatres (1999-2003). The stalls of the most important Italian theatres is the occasion for a reflection on the relationship between space, action and wait of which the audience is the protagonist. Starting from the early 2000s, the work of Toderi finds a dilated and strongly authorial dimension, as in a series of videos which, using aerial images, recreated night visions of cities such as Rome, Florence and London, following a point of view which transformed places in magical and mysterious territories.

Teatro Sociale
The Teatro Sociale is today one of the most significant and representative places in Bergamo: its relevant architectural and social history, its position and its renovation contribute to make it a meaningful site for the collective perception. The Teatro della Società di Bergamo, planned in 1803 by Leopoldo Pollack, Austrian architect and apprentice of Giuseppe Piermarini, is a typical Italian theatre with a well-proportioned classic structure. Opened in 1808, until the first half of the nineteenth century its opera seasons were prosperous and gratifying. In 1933 the theatre was shut down due to financial issues and only after various conveyances, in 1974 the property was taken over by the City Council and underwent maintenance. Since then, the space housed mainly contemporary art exhibitions and performances, until the start of the restoration, begun in 2006 as a joint initiative of the City Council and the Cultural Heritage Department. 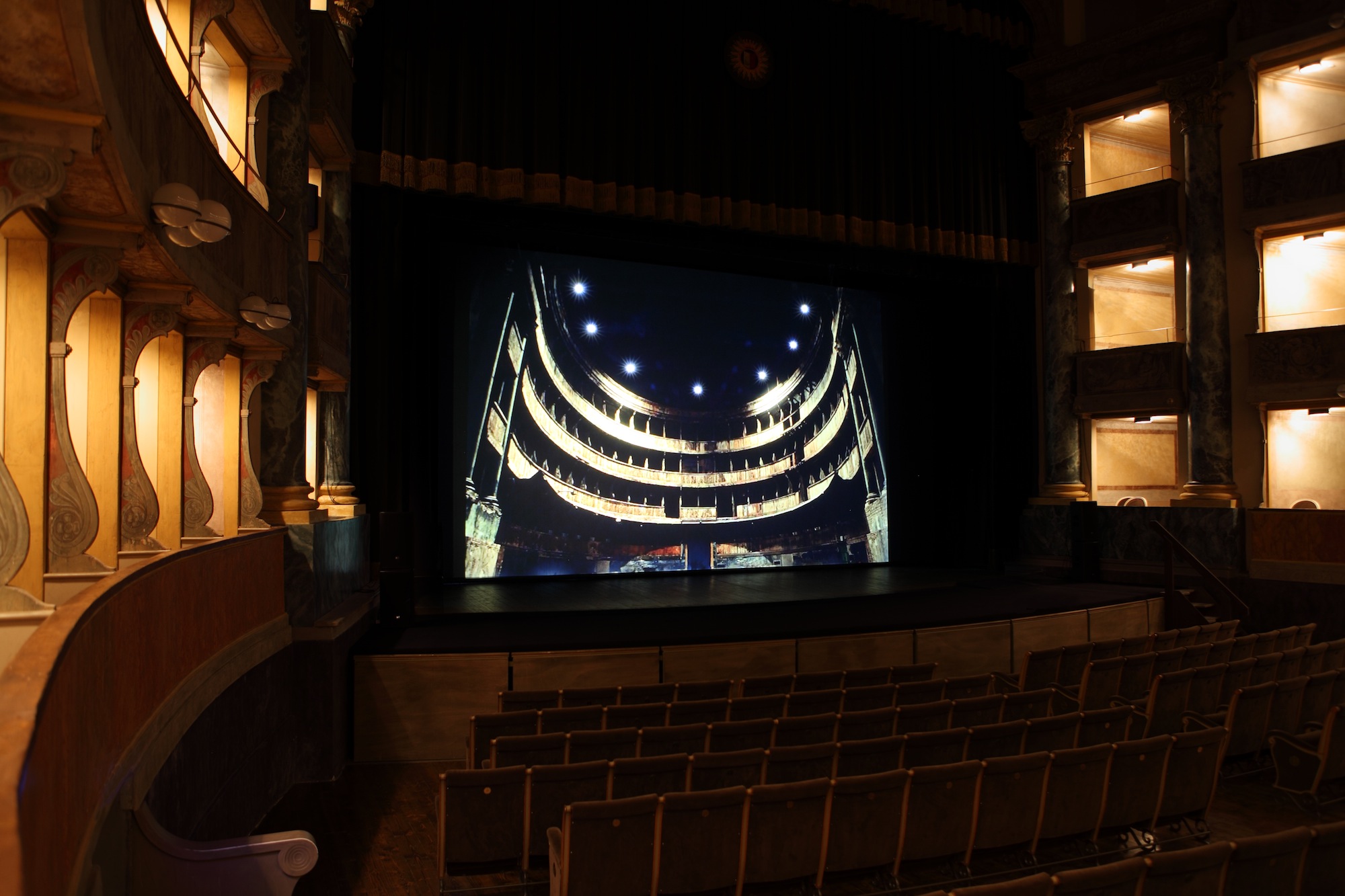 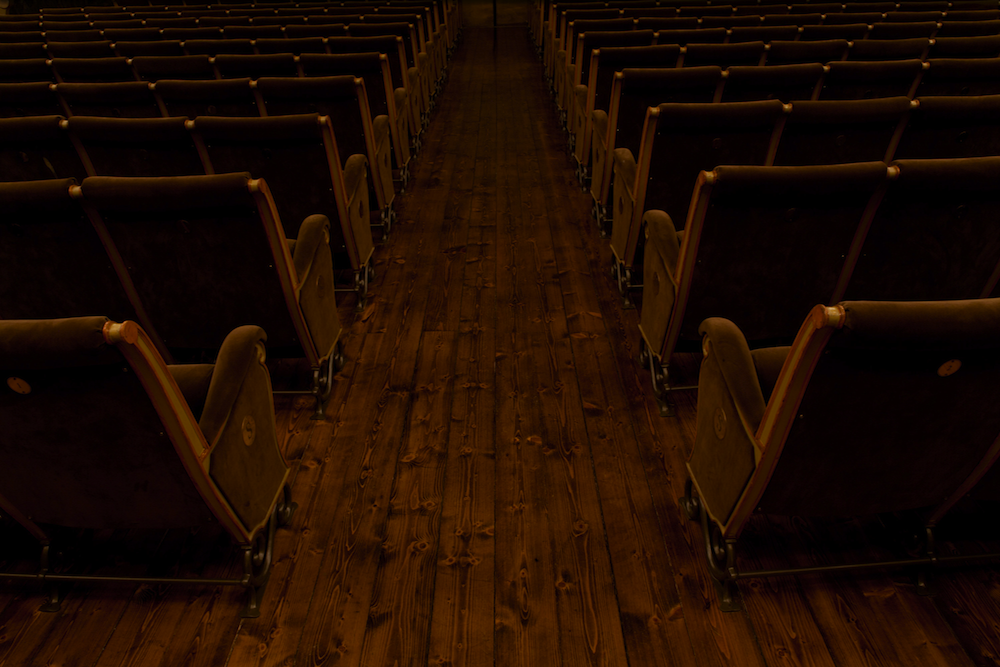 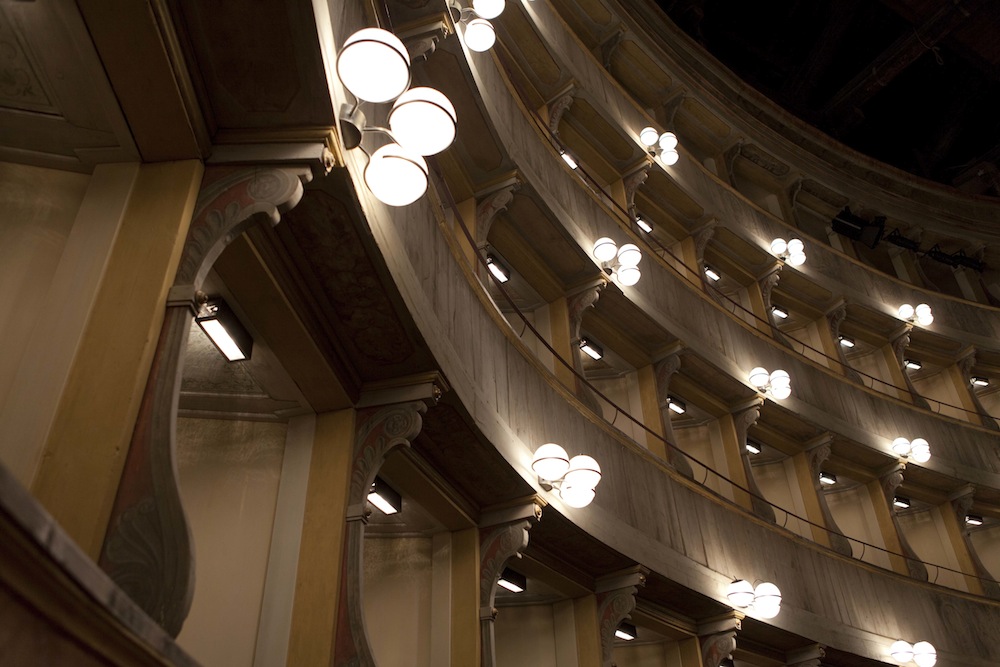