For contemporary locus 3, curated by Paola Tognon, artists Francesca Grilli (1978) and Vlad Nanca  (1979) measured themselves against the spaces, disused from about ten years, of the ex Hotel Commercio, perhaps the oldest guest house and shelter in the city.
Italian multidisciplinary artist, filmaker and performer, Francesca Grilli contributes with four works highlighting the time cycles and referring to the different identities that the site acquired during the centuries.
In the video Oro (2011), the artist goes back to the roots of western culture, recalling the image of the Uroboros, representing the cyclic nature of things and the theory of the eternal return.
In 100 (2012), site specific installation, Francesca Grillli transforms the first room in the source of the continual and dilated sound of the hundred tolls of the Campanone of Bergamo. A sound that, from centuries, at 10pm, beats the time of the city and is, at present, a concrete memory of the closure of the four gates of Bergamo inside its defensive walls. A work that, as the previous one, projects the external dimension of the city inside an unknown space and therefore now lived by time only. 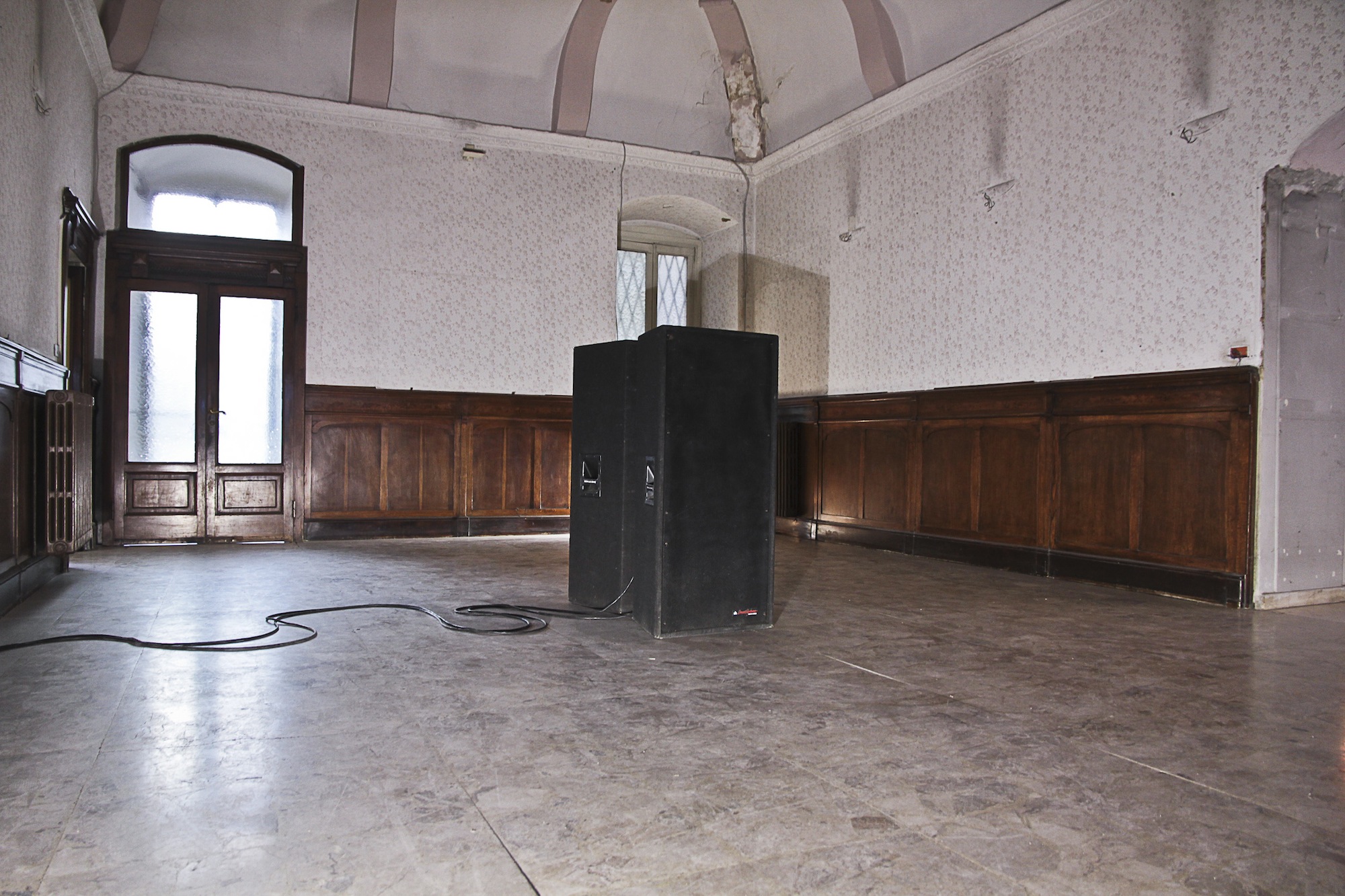 In the wake of the Uroboros, respectively opening and closing of the exhibition, she presents two performances Arriverà e ci coglierà di sorpresa (2012) and Unfading  Midnight (2012) – the latter at midnight of November the 10th: two works in which age becomes the measure of a renewed energy that, through experience and passion, expands time in the direction of an endless circularity.
On the other hand Vlad Nanca, romanian visual artist, proposes in the second room of the ex Hotel the work Terrorist balloon (2005), dedicated to a real life experience lived by the artist in Romania and re-edited, for this occasion, in a dimension reminding us of the condition of “old and new regimes”. Fragile objects for entertainment, the balloons in the second room and the coloured ones available to the audience during the opening night, are transformed by the artist in the unexpected icon of “old and new terrorisms”. In the third and last room, Vlad Nanca exhibited the site specific work re: modern (2012): a light installation – built through the assembly of old lamps neglected in the very same place – rendering homage to The Endless Column by the romanian artist Constantin Brancusi. Even in this case, the artist acts with a ready-made action playing on the edge of time, of purpose and, from the inside, of history of art.
The exhibition and the exploration of the site are accompanied by the contemporary locus 3 free app for Iphone and Ipad, developed by Elisa Bernardoni, with both Italian and English texts and images to expand on the works, artists and history of the location. 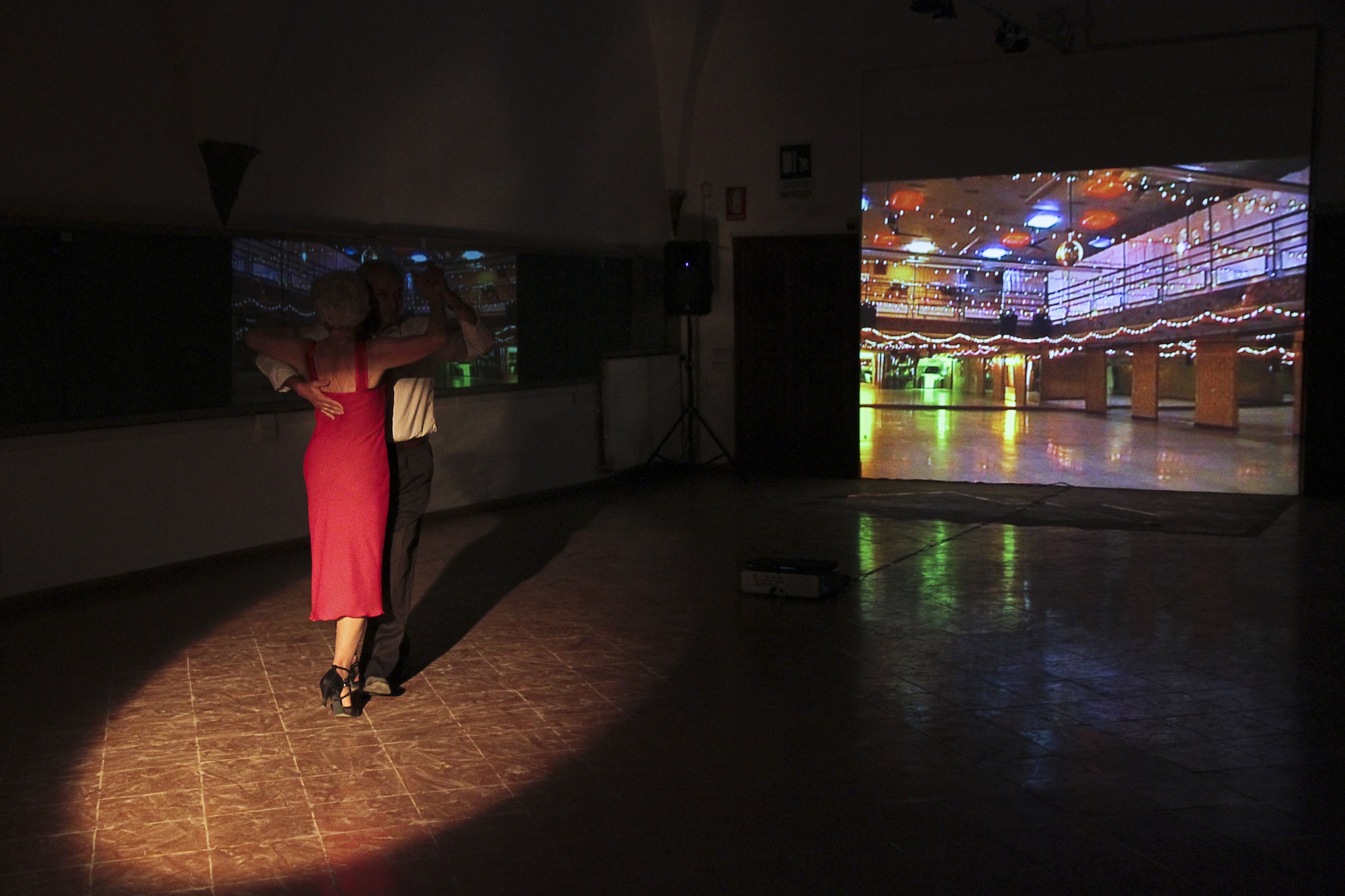 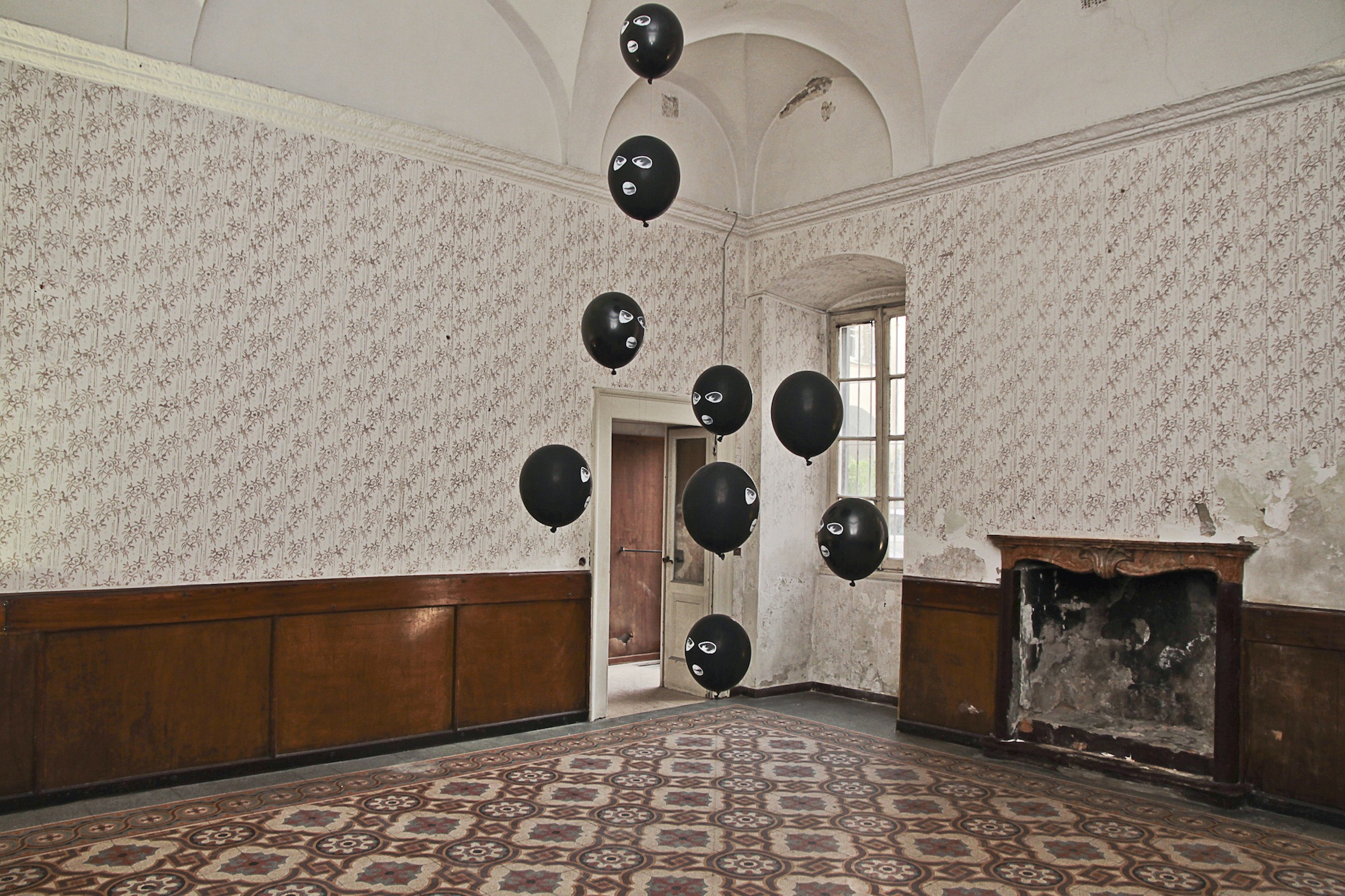 Francesca Grilli
Born in 1978 in Bologna, she lives and works between Bologna and Amsterdam.
Multidisciplinary artist, filmaker and performer, italian-born but active on the European scene, Grilli stands out for her research on the themes of time and its elusive cycle, of memory, mainly through its oral traces in stories. Her works, characterised by a deep analytical awareness transforming itself in narrative recollection, involve the audience in a contemplative, participatory and self-referential path. The performances, projected and structured by the artist with an almost totalising attention, play a vital role in her production, being the fulfilment, visualisation and temporary materialisation of her research.

Vlad Nanca
Born in 1979 in Bucarest (Romania), where he lives and works.
Visual artist known beyond the boundaries of his homeland, he shows a deep interest for the objectivity of sculptural shapes, as witnessed in his most recent works. The sense of sobriety and rigour with which the artist transforms the daily and common items, thanks to an accurate choice and mimesis of materials, constitutes his specific and essential alphabet. Another element characterising Vlad Nanca’s production is the disproportion that occasionally marks the sculpture, really close to the minimalist one, but full of sharp irony. The items that the artist reassembles from normal uses are often proposed as ready-made, returning the interpretation of social codes.

Ex Hotel Commercio
The ex Hotel Commercio, officially closed to the public in 2004, is part of the ancient complex of S. Spirito, dating back to the fourteenth century.
In 1311 the monastery, the church and the adjoining hospital and shelter were founded and entrusted to the order of the Celestines; after two centuries, it is recorded the removal of the Celestines, in favour of the Canons Regular of the Lateran.
From the works carried out in this period, two cloisters, adjoining the church, are still maintained to this day, having gone through deep transformations during the Reinassance by the hand of the architect Pietro Isabello called Abano (1490-1550), who also made the façade of the ex Hotel Commercio. In 1730-1740 important works were carried out by Caniana in the church, already rich in masterpieces such as the altar piece of Lorenzo Lotto, and, together with the works occurred in 1850, they widened the presbytery and the chancel, while the convent spaces welcomed the Orphanage of the Poors of S. Martino. Of the frescoes and paintings of the monastery, only those decorating the guest house inside the halls of the ex Hotel Commericio (then called Hotel Elefante) were saved and are now property of the Istituti Educativi of Bergamo.
The venue, at the ground floor of the old guest house and later hotel, was composed of three wide halls preceded by an entrance hall facing the street, presenting the old cinquecento structure almost unaltered on which, however, traces of the recent accomodation service can still be recorded.
The halls open on an ancient courtyard, invisible for decades: another secret place disclosed, bringing back to the medieval period of the S. Spirito complex. 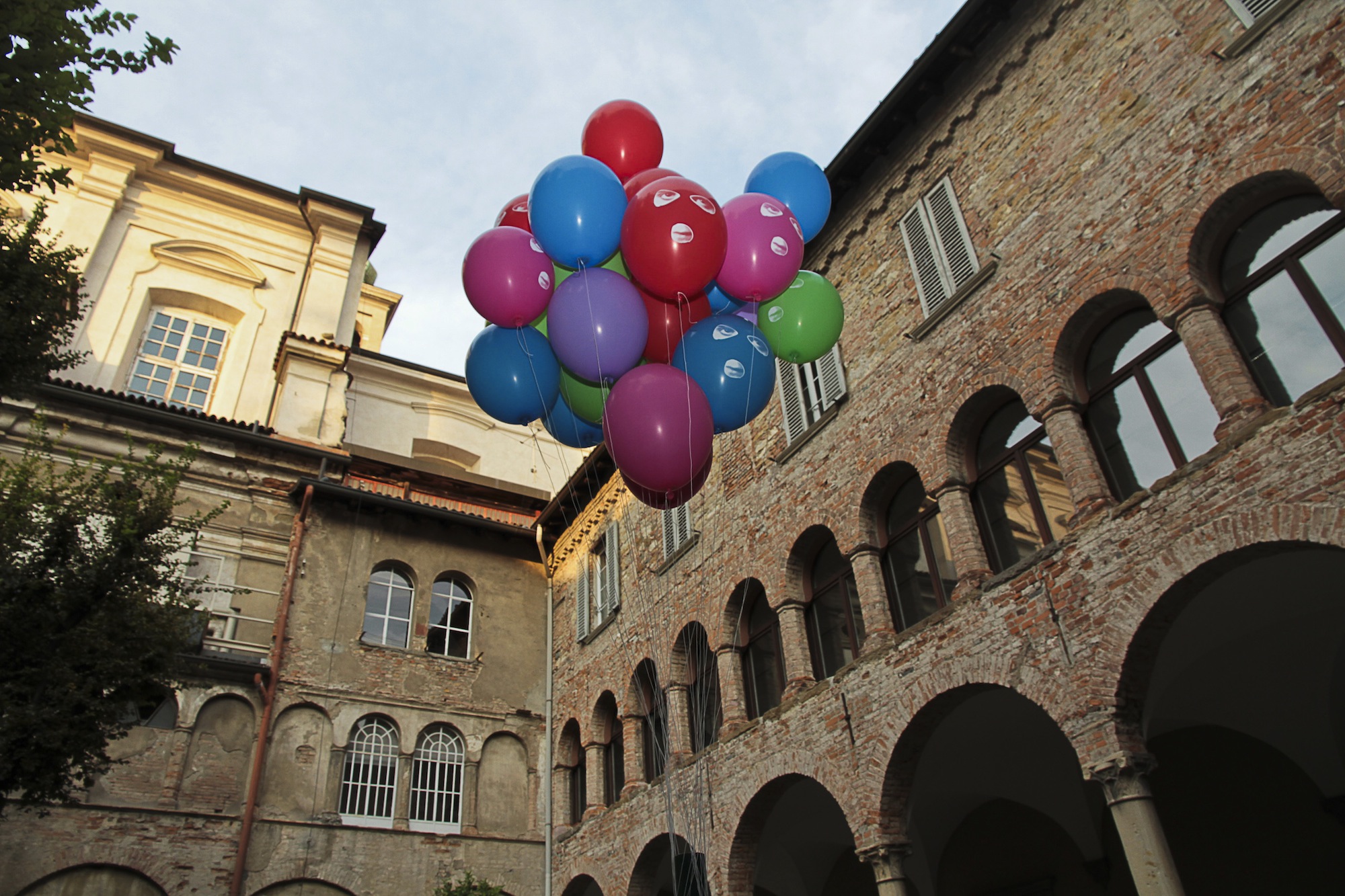 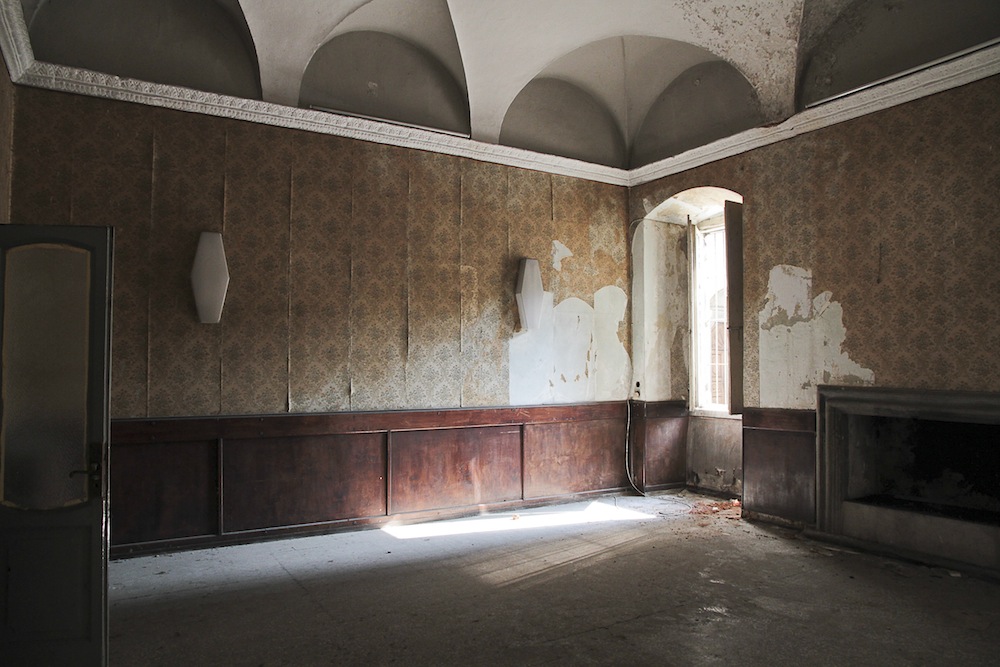 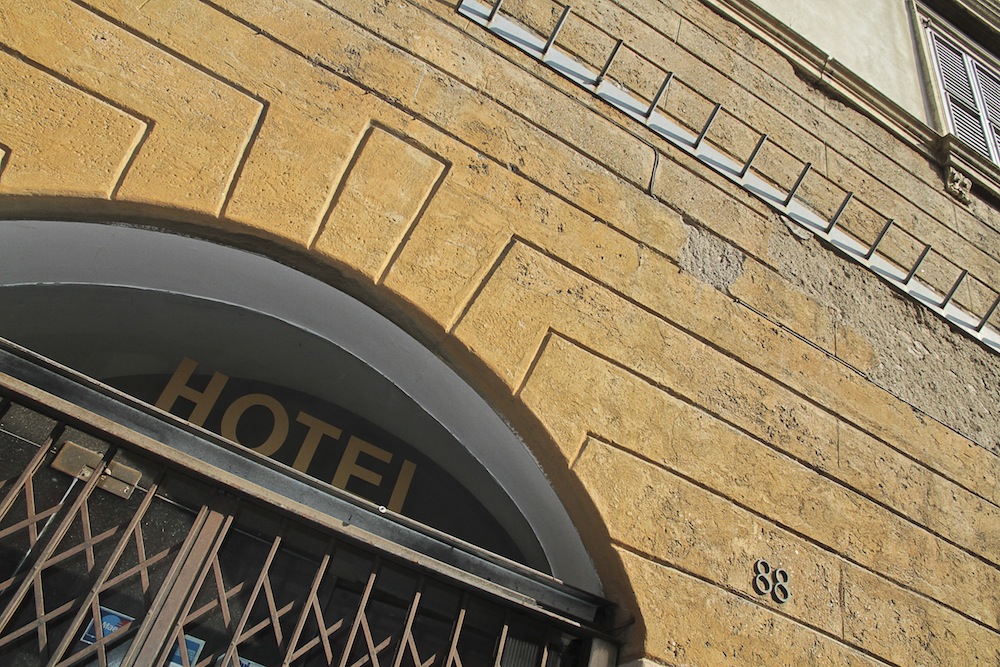