The former Albergo Diurno (Daycare Hotel), a circular and underground structure of 1200 square metres, was built as an air-raid shelter and afterwards transformed into a daycare hotel with hygienic-sanitary, commercial and recreational functions. Today it is one of the most significant and evocative places in the social history of Bergamo, hidden for 40 years, but present in the memory of entire generations.
The project Contemporary Locus 12 with the artists Kader Attia and Alvin Curran has been created uniquely for this structure. 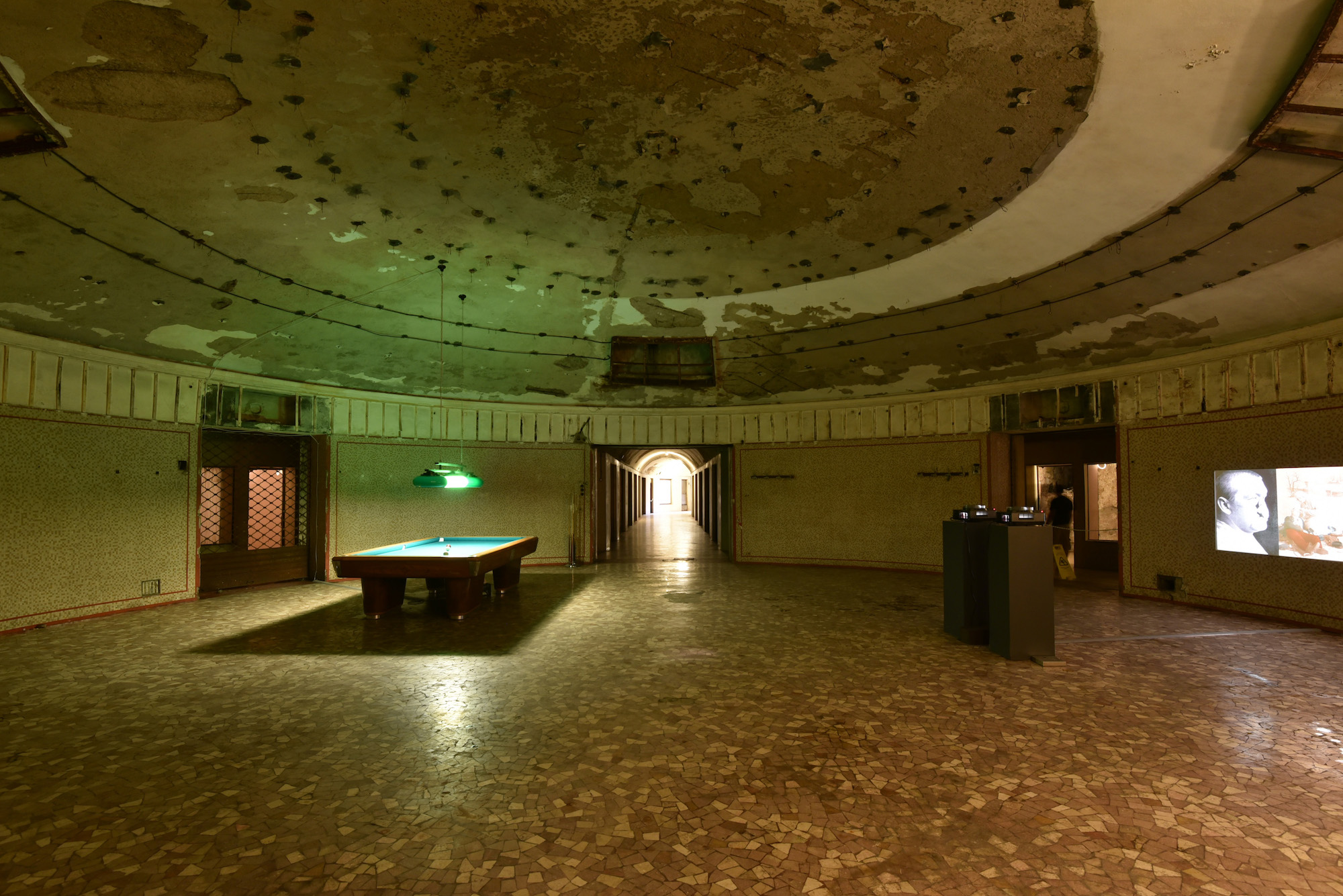 Kader Attia
Kader Attia (1970, France) lives and works between Berlin, Paris and Algiers and is internationally renowned for the modernity of the subjects he deals with, which are suggested by works of great influence in museums and international art exhibitions.
Brought up between Algeria and the outskirts of Paris, Attia explores the material and cultural history of objects and images that connect histories and identities associated with the assimilation process and conflicts between different cultures (colonialism, war, ethnic conflicts). The focal point of his research is the concept of repair, not only from a physical, but also from a moral point of view. Repair is presented not as an ideal of perfection or as a recreation of an original state, in order to hide or deny the contradictions and tragedies of history, but, conversely, as a concept involving memory, to repair fractures of existence experienced by people and generations through a process of awareness and reflection.
The condition of inaccessibility of the former Albergo Diurno and its panopticon plan have influenced Attia’s project for Contemporary Locus 12: a big sculpture of red metal, Eternelle Promesse (2017), located in the Paris building where today can be found La Colonie, a theoretical and artistic space opened by the artist in Paris; the slide show installation The Repair (2012) that metaphorically compares the process of repair of the human body in the years marked by the war with that of sacred and everyday objects and, finally, the projection of the film Reflecting Memory (2016) that elaborates the repair concept through personal reflections with a universal value (the first subtitled showing for the Italian public). 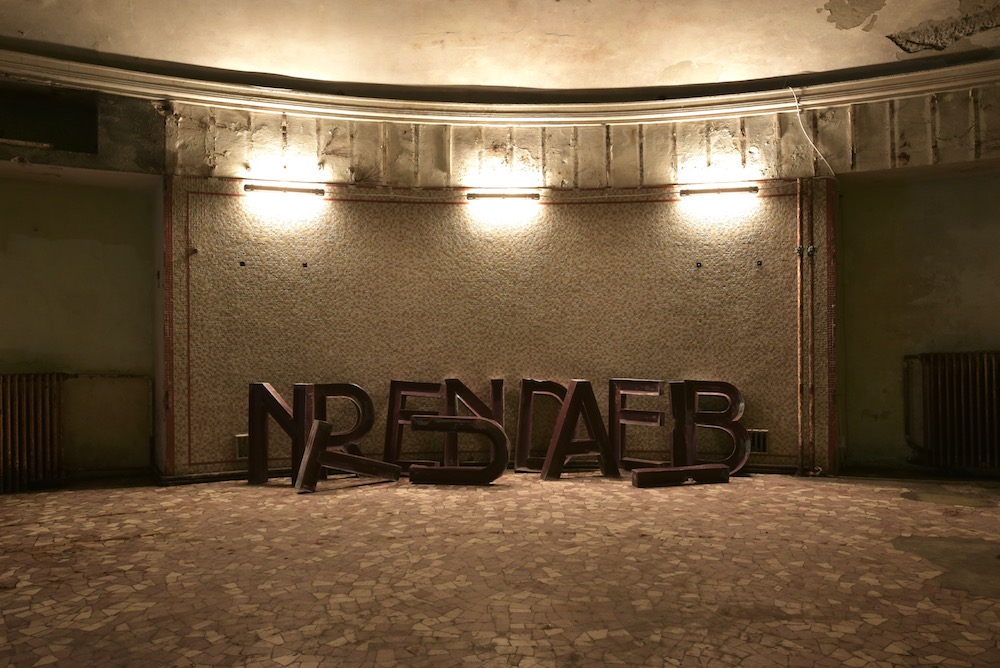 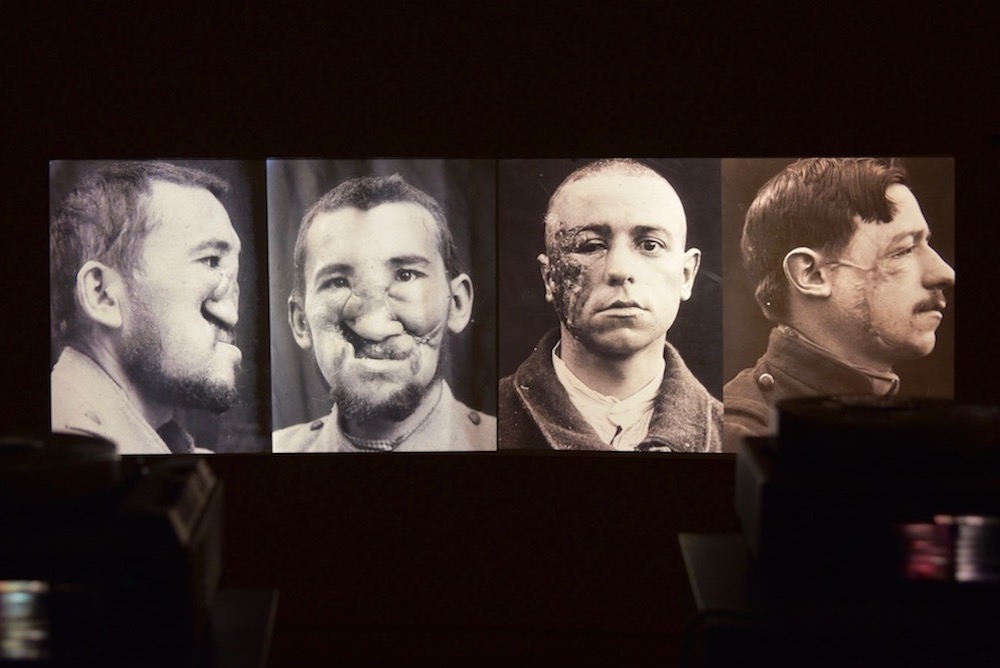 Alvin Curran
Alvin Curran (1938, Providence, USA) lives and works in Rome and all over the world – a composer, musician and artist, a pioneer of electronic music, he is internationally renowned as an irrepressible collector of sounds extrapolated by everyday life. Founder of Musica Elettronica Viva (Electronic Live Music) and then close to minimalist research, Curran stands out for his capacity to compose fragments and actions that transform into transgressive and empathetic soundscapes. He has the extraordinary capacity to involve artists, musicians and authors from different disciplines, along with the the determination to transform every experience into a sharing opportunity that does not distinguish between specialists and amateurs as well as the capacity to control actions and performances of great complexity.
The circular structure of the former Albergo Diurno and its hyperbolic capacity to combine sound waves with unexpected resonances are the theme of a multi-voice, multi-actor and multi-instrument (including a billiard table) composition and performance, Concerto per Vasca da Bagno e Orchestra (Concert by Bath Tub and Orchestra), performed with the cooperation of the Istituto Superiore di Studi Musicali Gaetano Donizetti (Higher Institute for Musical Studies). The sounds recorded during the rehearsals and the performance, processed and harmonized by Curran, are played back throughout the entire exhibition in the small rooms of the former Albergo Diurno. Alvin Curran’s composition for Contemporary Locus 12 is an architecture of sounds that returns voice and imagination to the place itself. 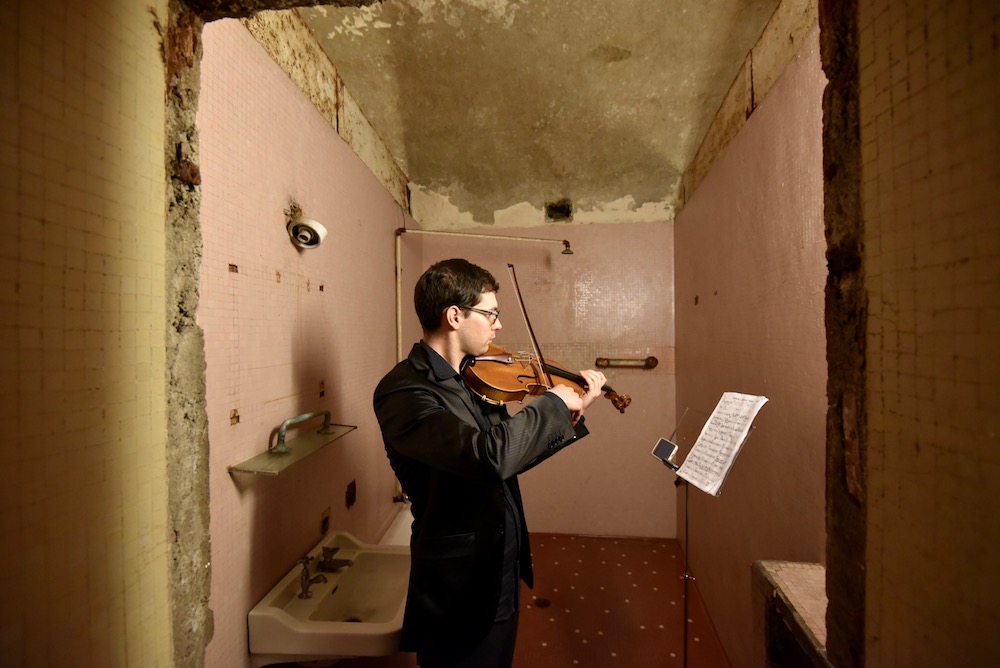 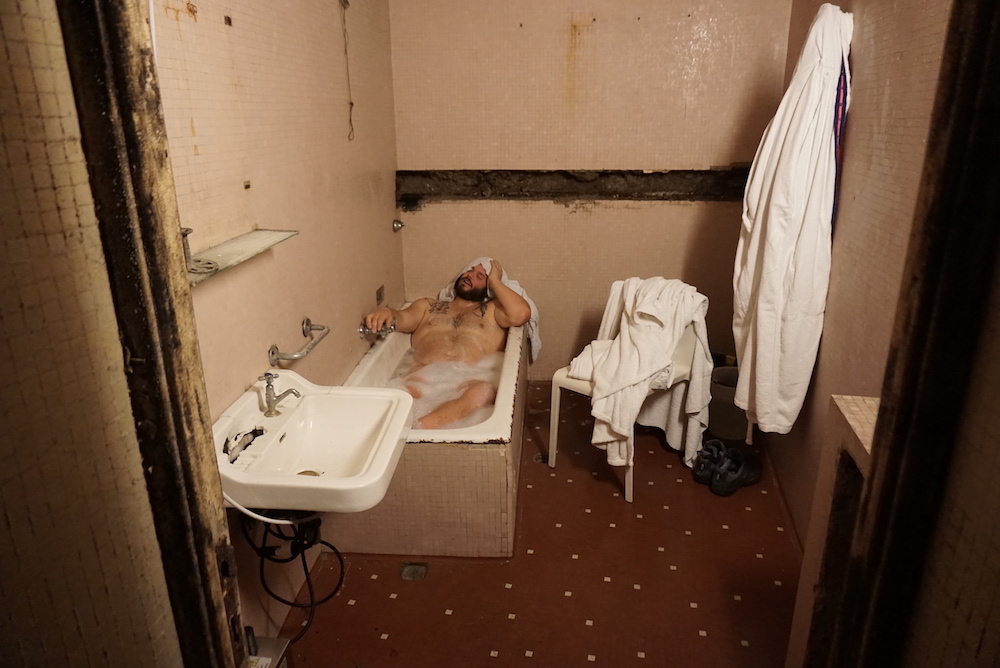 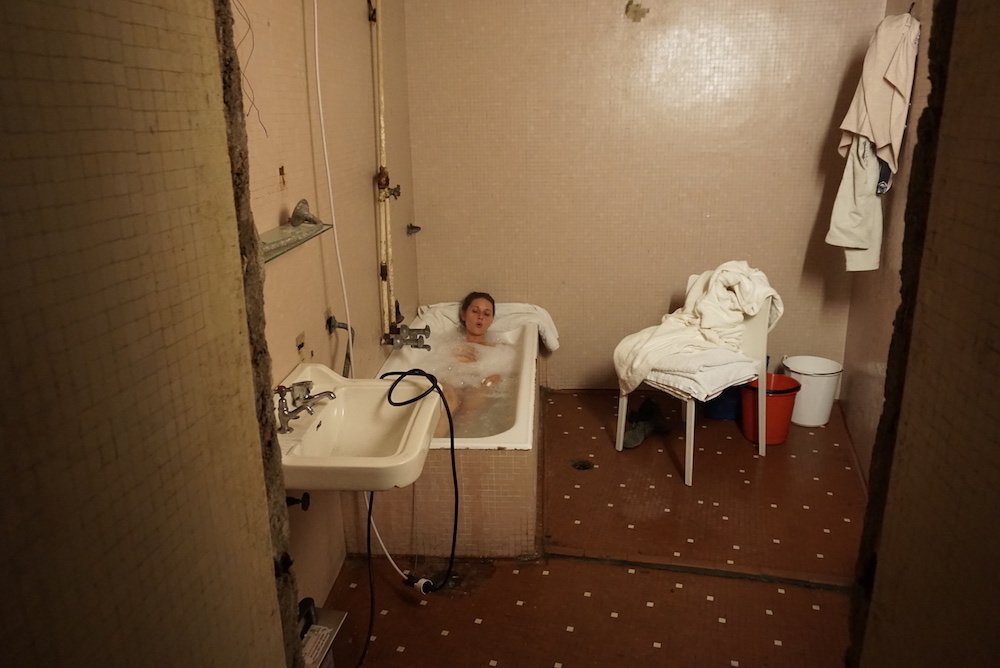 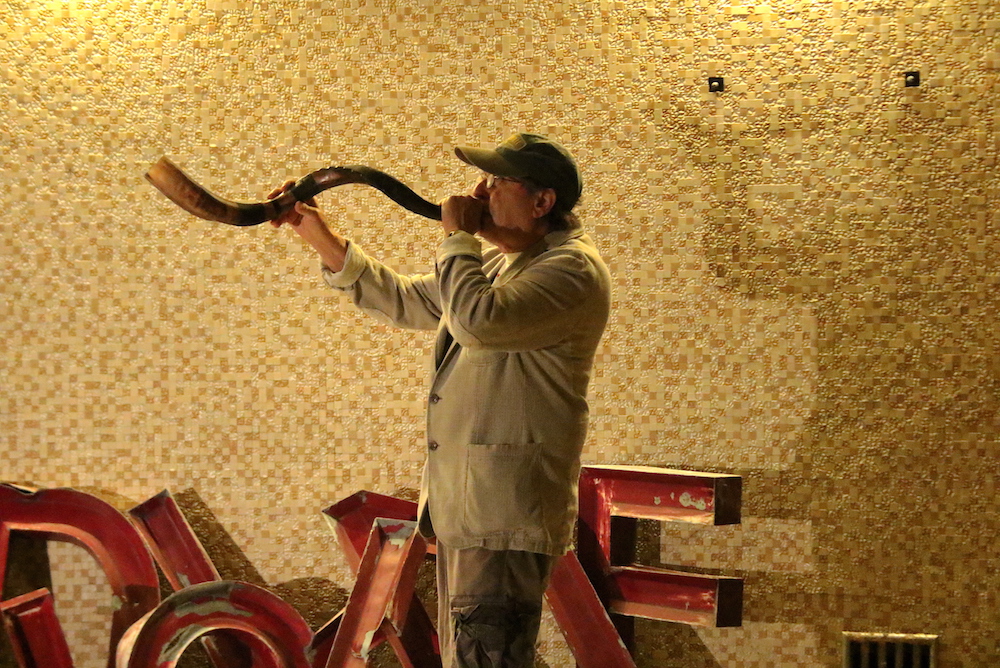 Former Albergo Diurno
The former Albergo Diurno (Daycare Hotel), a circular and underground structure, was built as an air-raid shelter and afterwards transformed, from 1949 to 1978, into a daycare hotel with hygienic-sanitary, commercial and recreational functions - from a place for the dictation of letters to public toilets, from a luggage storage to a barber shop, from a bar with billiards to a travel agency. Bound by the Soprintendenza ai Beni Artistici e Architettonici (the Superintendency for Artistic and Architectural Goods), the former Albergo Diurno is one of the most significant and evocative places in the social history of Bergamo, hidden for 40 years, but present in the memory of entire generations. 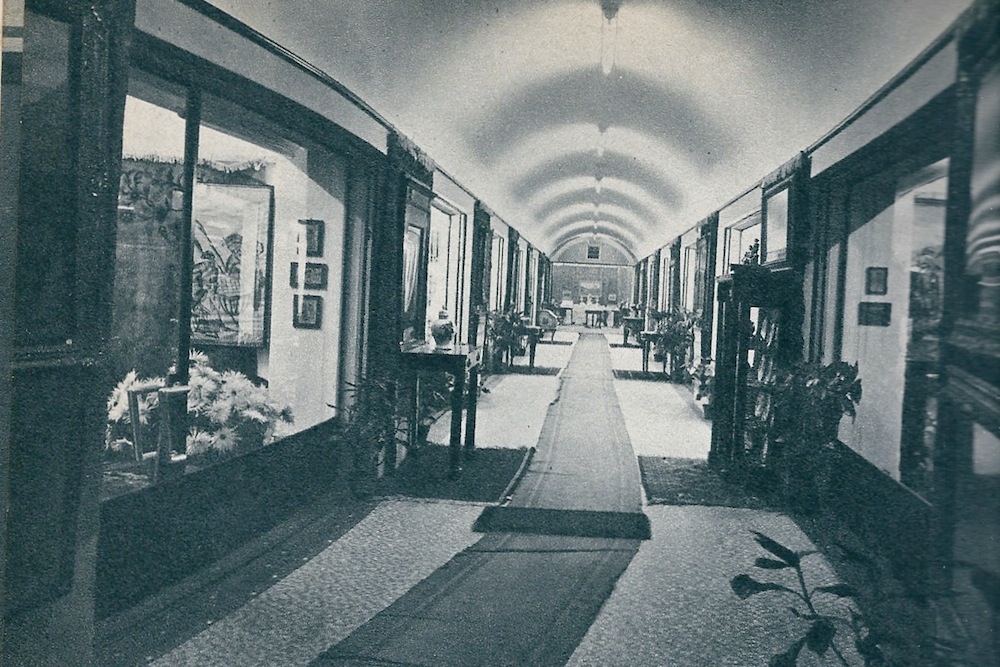 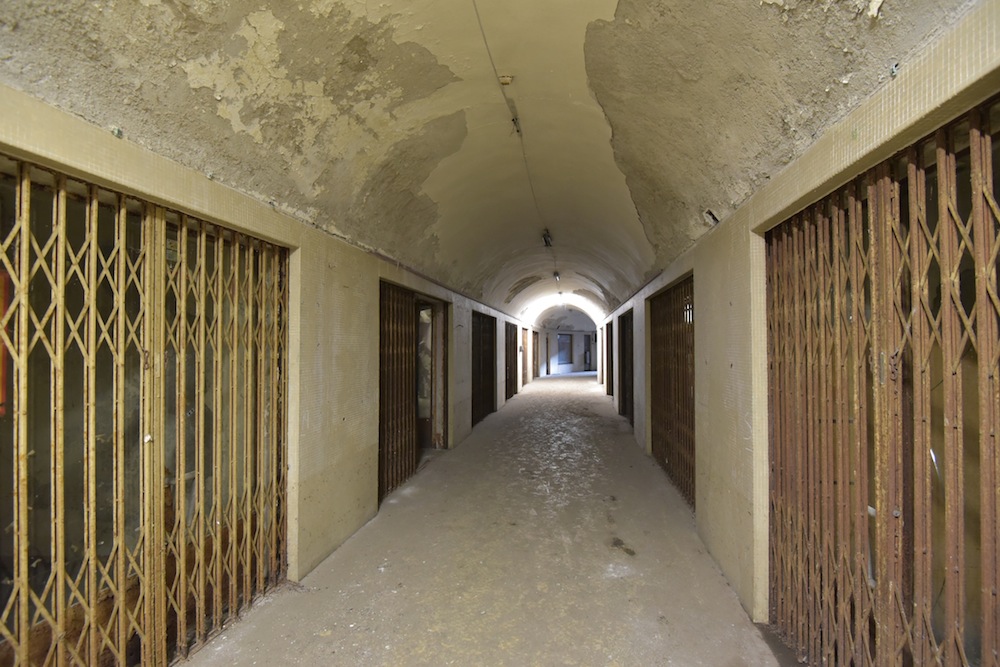