TURBULENCE is the new project by The Cool Couple (Niccolò Benetton – 1986 | Simone Santilli, 1987), curated by Paola Tognon for Contemporary Locus at Monastero del Carmine in Bergamo.
The artist’s ironic and irreverent research across images, sculpture, actions and performance unfolds in the old monastery through two pieces that represents the turbulence of human condition. The location, a former monastery that visibly testifies to the passing of time, is the perfect stage to highlight the provocations of the duo and the lateral perspective from which Cool Couple observes and analyses human behaviours.
The performance cycle Karma Fails – Meditation is visualizationis the initial phase of the project. Karma Fails are actions of meditation open to the public that bring together performance practices, relaxation techniques and guided reading. They take place in the central courtyard of the Monastero del Carmine in the early hours of morning and night, like expanded frames that interrupt the daily flow of our thinking and habits. The practice departs from the observation that meditation, in the era of the Anthropocene, freed from its original values, becomes the tool to increase capitalist productivity. The fictional study ‘meditation is visualisation’ conceived by The Cool Couple employs meditation to expose the concept of individualistic success linked to profit, to which the practice is often subjugated to. Karma Fails guides us – by means of site-specific reflections, irreverent observations and free interpretations of texts and essays – through a meditation on work in the era of cognitive capitalism, on the addiction to images, on the apparently unharmful relationship between human and nature. The setting for the meditation sessions and the chosen times – identified within the so-called leisure time – are exemplary of a need to ‘steal’ moments from productivity and to choose ‘another time’ where light and darkness get confused and bring to our attention forgotten natural landscapes. Turborage  the second piece by The Cool Couple – on view between June 5thand July 1st– consists of a tall concrete column built at the entrance of the Monastery in front of the ancient columns that support the portico.
Throughout the duration of the project the public is invited to hit and destroy the column with a baseball bat. The particularly soft material used to build the column makes it possible for visitors to choose between destroying the piece or turning it into an abstract sculpture.
The conception of this participatory piece is inspired by a novel by Gianni Rodari, ‘Il Palazzo da rompere’ (The palace to be broken) : a small city, struggling with hyperactive and violent kids, imagines and builds a palace decorated to be vandalized, from which the kids eventually come out exhausted and harmless. It is a tale that anticipates the success of the rage rooms, global business developed in the last 15 years.
What interests the artists in the metaphor evoked in the novel by Rodari is the systems through which power manages violence by isolating it and making it unharmful within or outside of the community and its declination in the history and world of art.
What emerges from the piece is a reflection on the consequences and limitation of free expression and control over our bodies in contemporary society. The piece also accounts for a transition in the history of art: if between the end of the 60s and the early 70s artistic actions manifested through the artists’ bodies, the beginning of the XXI century evokes a certain desire for the destruction of objects, products of consumerisms that rule our desires. 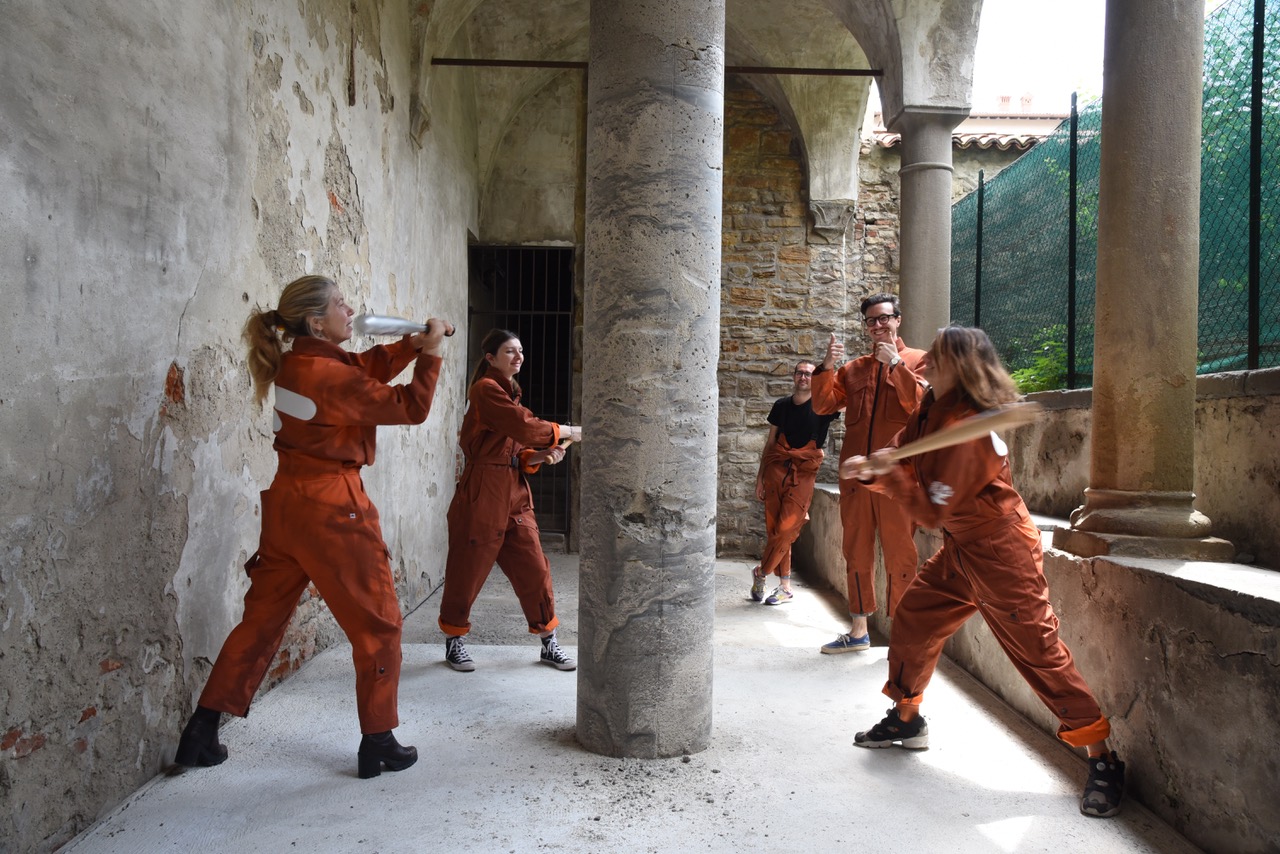 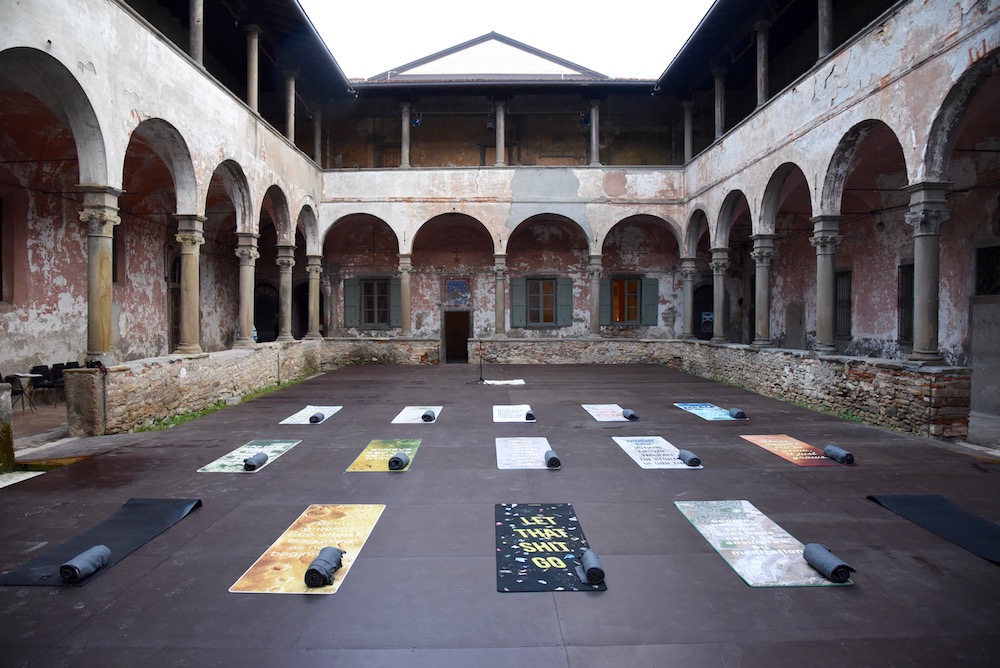 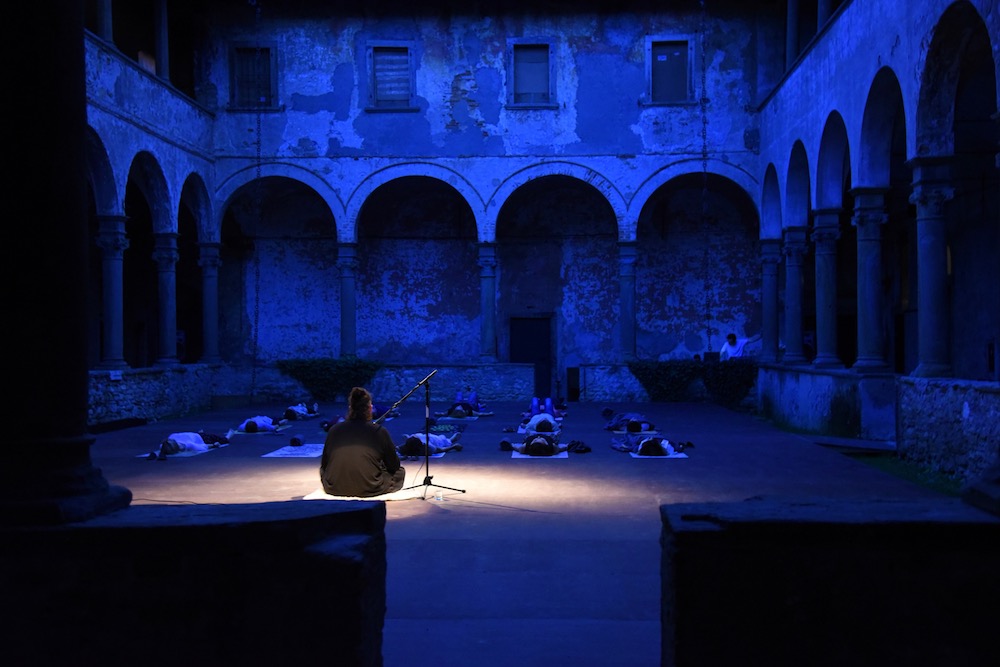 The Cool Couple
The Cool Couple  is an artist duo created in 2012 by Niccolò Benetton (1986) and Simone Santili (1987) whose research focuses on the frictions emerged in our daily relationship to images. Their practice departs from the idea that images are active agents that are inevitably influenced by logics of extractions of value and they work on experiences of shitposting*.
In 2017 Cool Couple  was in residency at Careof (Milano), Nirox Foundation (Johannesburg), Kuldiga Artist Residency (Kuldiga), and was recently awarded the Under40 Photography award at ArtVerona and took part in the group show ‘That’s IT’ at MAMBO, Bologna, with a project bringing together the worlds of art and football through gaming.
Alongside its artistic practice The Cool Couple nurtures an interest for teaching: throughout the years it collaborated with institutions such as NABA, IED Torino, ISSP, University of South Wales. Niccolò e Simone are also members of the editorial committee of GENDA Magazine, of research collective POIUYT and Chinese-Italian band Rui & the Rainbow Dragons.
/ * Shitposting: publication of useless or irrelevant content, aimed at disrupting the conversation or provoke. Digital word of the year 2017 according to the American Dialect Society.

Il Monastero del Carmine
The Carmine Monastery is clear evidence of the historic layers and their superimposition in the urban texture of the Upper Town. The building went through several construction stages, from the early XIVth century when the Humiliati friars had a church built over remains of the ancient Roman walls. The church passed on to the Carmelites in 1357, to be renovated and enlarged one century later. It was then that the Monastery took on its layout.
The structure underwent ongoing renovations since the early XVIth century. The church of Saint Agatha of the Carmel, originally XVth-century, was given Baroque decorations by Giovan Battista Canina. The wings that hosted the friars’ cells also underwent modifications and renovations, and were lastly turned into the two current wide rooms at the eastern and the southern ends of the piano nobile.
The Carmelites abandoned the Monastery in the IXXth century and decay set in throughout the XXth century. It was only from the 1970s that structural works were carried out. The building was included in a detailed plan of recovery of the Upper Town, complying with environmental, cultural, and historical-artistic protection standards. A restoration plan to give the Monastery new functions, is still on hold. The cloister and some rooms on the ground floor, however, have been reopened and put to good use since 1996, thanks to the TTB – Teatro tascabile di Bergamo. The TTB headquarters are located here, and act as a research and education center to promote contemporary theatre culture.