curated by Contemporary Locus and Festival Orlando - identità, relazioni, possibilità
May 17 – 21, 2017
Screenings every night from 7 pm on the glass window of the Domus
Piazza Dante, Bergamo, Italy

In the Hollywood productions of the 60s a kiss could only last 3 seconds. In the film KISS, thirteen couples - heterosexual, gay and of different origins - kiss for 3 minutes each.
Contemporary Locus, which curates the art section of the festival Orlando by Lab 80 cinema, presents KISS by Andy Warhol (USA, 1963/64). Part of the history of art and cinema of the XXth century, today the film still holds its visionary and revolutionary character, more than fifty years since its production.
The open-air screening in one of the central squares in Bergamo, highlights a strong artistic message within the frame of Orlando, festival that focuses on issues of identity and relationships through the lenses of cinema, dance, theatre and art. 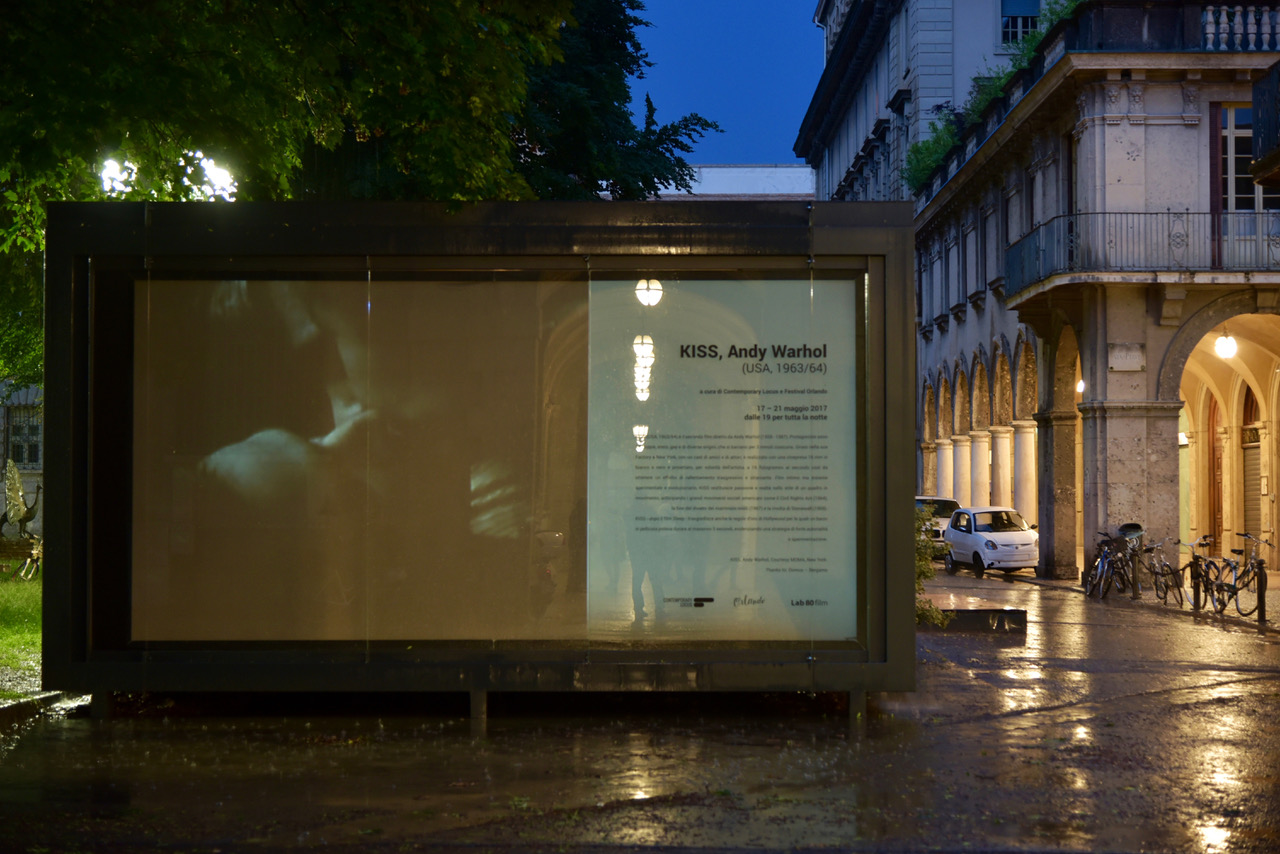 KISS (USA, 1963/64) is the second film directed by Andy Warhol (1928, Pittsburg - 1987, New York). The protagonists are 13 couples, straight, gay and of different origins, who kiss for 3 minutes each. Shot in his Factory in New York with a cast of friends and actors with whom he will continue several collaborations, it is made with a 16 mm black and white camera and projected, at the will of the artist, at 16 frames per second in order to obtain a transgressive and alienating slowdown effect. An intimate but at the same time experimental and revolutionary film, KISS restores passion and reality in the style of a moving picture, anticipating in parallel the great American social movements such as the Civil Rights Act (1964), the end of the ban on mixed marriages (1967) and the Stonewall revolt (1969).
KISS - after the film Sleep with John Giorno - also transgresses the golden rules of Hollywood for which a kiss on film could last a maximum of 3 seconds, highlighting a strategy of strong authorship and experimentation that continues in Empire of 1964 where Warhol films the Empire State Building in New York for 8 hours, with fixed camera.